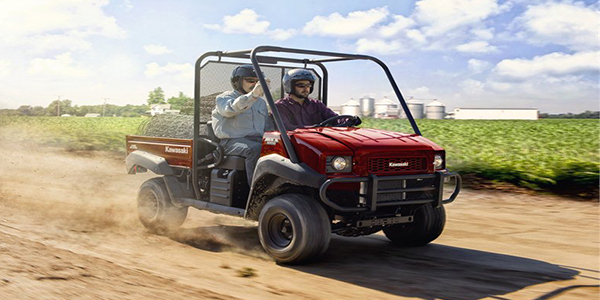 The silver lining in the face of continuing soft motorcycle sales has been the hidden strength of the Side-by-Side (SxS) market and continued stability of the ATV sector. We say “hidden” because unlike motorcycles, scooters and ATVs, Recreational Utility Vehicles sales are not reported by the Motorcycle Industry Council. Overall ATV/UTV new unit sales fell at the same rate during the financial crisis, but have come back stronger than motorcycles.

Before the crash, the SxS market saw sales of about 270,000 units in 2008, by 2016 that figure has climbed to just under 411,000 in the U.S. However the slices of marketshare pie are shifting: Polaris still carves off the lion’s share, followed by the utility focused John Deere and Kawasaki (nearly even with each other for second place); Honda, then BRP climbing fast with Can- Am X3 sales. Then Kubota, Yamaha, Textron, Club Car and Arctic Cat. Of course, this year, Arctic Cat sales will be in Textron/Bad Boy column.

ATV ACTIVITY
Power plays by ARGO and Textron on the ATV side, plus a renewed push from established players like Yamaha (see Pit Pass in this issue) have the ATV market looking to hold steady. Meanwhile the Side-by-Side segment continues to draw more OEMs into market, with the up-and-comers Bob Cat, John Deere, HiSun and as seen at AIMExpo CFMOTO, are all ready to make a run at the SxS sector.

Although ATV sales have experienced the same sort of malaise as motorcycles, don’t overlook the fact that more than 215,000 new units were retailed each of the past three years. A fact not lost on ARGO or industrial giant Textron, both of which have made major moves this year.

In early March Textron Speciality Vehicles (TSV) bought Arctic Cat for $247 million. Overlap with TSV’s existing Bad Boy and EZ-GO offerings resulted in Arctic Cat ATVs and Side-x- Sides going away, but the Altera ATV lives on. Dealers were warned at the time of the transition this was coming and to start clearing out Arctic Cat badged ATV inventory.

Meanwhile, a manufacturing partnership with TGB in Taiwan made it possible for ARGO deliver an entire ATV range across North America essentially overnight. “Adding ATVs and other strategic initiatives will enable us to double our dealer base and triple our business by 2020,” said company president Brad Darling when the ATVs were announced, along with a target goal of 624 dealers.

The addition of ATV business will not shift the company’s attention from its XTV amphibians, which celebrated 50 years in August of 2017. According to Darling, 66% of ARGO’s existing XTV customers also own an ATV, and 64% of their dealers wanted an ATV product to sell. “While 66% of our customers own an ATV, only 21% owned a SxS.” Hence the deal with TGB to bring the 500 Xplorer (actually 503cc/39 horsepower) and the1000cc (997cc/83 horsepower).

“We will have two or three times fewer dealers than some other brands, but we aren’t into that marketshare game,” stated Darling. “We just want to do a good job and want our dealers to be able to make money.” 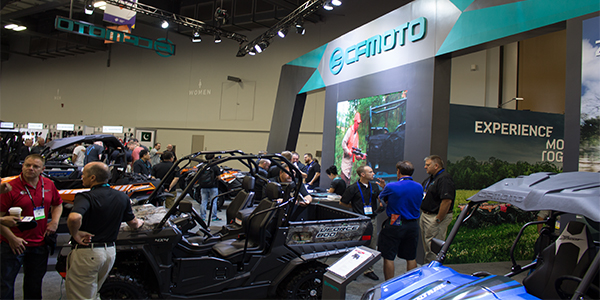 GETTING A LITTLE ON THE SIDE
Side-by-Sides were also a big draw at AIMExpo with the CFMoto UForce 1000 looking like it is ready for prime time, Yamaha’s 4-passenger Wolverine, a crop of updates to Kawasaki’s MULE utility fleet, some “Pioneering” updates for Honda and plenty over at the BRP Pavilion. But the bigger news might have been the debut of Cub Cadet’s two new  “UV” models. The Challenger 550 and 750 are said to offer industry-leading standard features and limitless customization opportunities.

“Cub Cadet has been in the utility vehicle business for nearly two decades,” said Tom Mielke, UV product marketing manager. ”Since our vehicles have traditionally served the work/utility end of the spectrum, a lot of the folks in the powersports industry haven’t been familiar with us. We exhibited at AIMExpo for the first time this year to let the powersports industry know that we have something uniquely cool.”

Mielke sees the crossover niche as a sweet spot for dealers. “The relevant market as we look at it, is comprised primarily of crossover vehicles like the Challenger series. It’s been on a continuous growth trajectory for the past several years. That’s a big part of our message to dealers: This is a fertile and growing market! Our value proposition is, “Comfort, capability, and customization at a better price than people thought they could afford.”

Cub Cadet Challenger UTVs offer a host of standard features that often are sold separately: All vehicles from the 500 and up feature a standard winch, roof, windshield, turn signals and aluminum wheels. The Challenger 550 and 750 offer even more standard features like independently-selectable front and rear differentials and high-performance shock absorbers. “We’ve designed the Challenger Series with exclusive features that give owners the power to customize their utility vehicle for the challenges they face – at the farm, ranch, off-road or in the woods.” 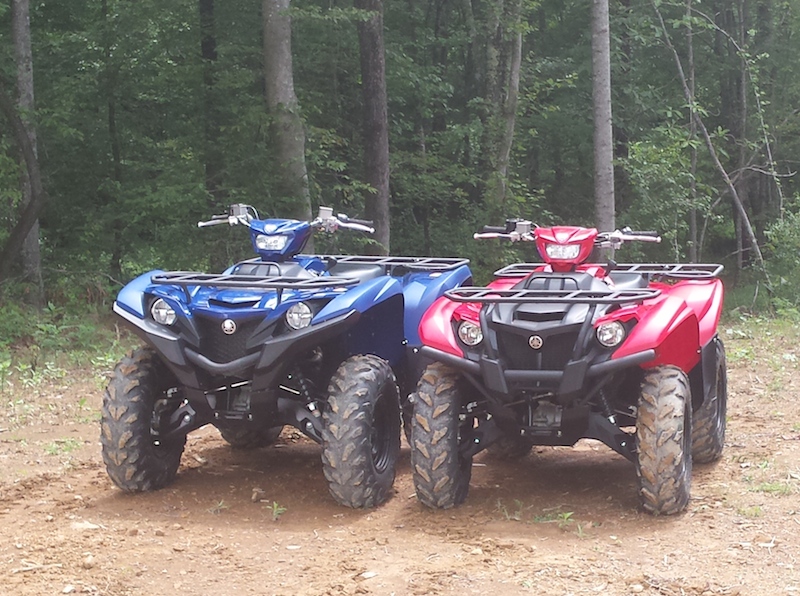 AUCTION ACTION
“The return to strength is entirely due to SxS units,” notes National Powersport Auctions COO Jim Woodruff. “New ATV sales are still down by two-thirds compared to a decade ago, while new unit SxS sales are up over 300% since 2006.”

Although ATVs are still readily available, Woodruff notes they have seen the same thing in the auction lanes, where ATV volumes have largely been replaced by SxS units. At auction, ATVs and UTVs have the least price seasonality of the major categories… meaning year-round business opportunities at the dealership level.

The ratio of used to new registrations is about 2:1 for the overall powersports market. For the ATV/UTV segment, the ratio is 0.7:1 (and <1:1 the last decade), and 0.35:1 for UTV alone (stable the last 6 years as the market matured). “These numbers imply that overall ownership of ATVs and UTVs continues to grow, with demand being satisfied by both new and used units,” states Woodruff. The used/new ratio may also be <1:1 due to off-road owners being more likely to retain their used units when they buy a new one.

MAHINDRA TO MARKET
Look for an official announcement from Indian-made Mahindra soon. In 2010, Mahindra became the world’s highest-selling tractor brand by volume. The company is the largest tractor manufacturer in India with the capacity to build 150,000 tractors a year. To help raise U.S. awareness, Mahindra was the first Indian company to sponsor a car in NASCAR. In 2008, Mahindra was a sponsor of the McDonald Motorsports team which ran the #81 car in the NASCAR Nationwide Series.

Plans call for Mahindra to invest $1 billion in the United States over the next five years, but it doesn’t need U.S. capital markets for expansion, according to financial publication Barrons. This investment will double Mahindra’s U.S. workforce to 5,000 people. “We are launching an off-road utility vehicle. They are used for hunting, farm work, and some of the vehicles are fairly refined,” company chairman Anand Mahindra told Barrons. “It is being designed now in Detroit, branded as Mahindra.”

Tough sell for an Indian company in America’s heartland like Indiana? “Mahindra, through its tractor business, has a reasonably well-known brand among farmers and people who work in the backwoods. We have 540 dealers. It is not a household name, but not an unknown name,” he told Barrons. The new division will be called Mahindra Vehicle Sales and Services, Inc. in order to differentiate MVSS from MUSA (Tractor) – commodity vs recreational. Dealers in the powersports sector will be doing business with MVSS Inc. 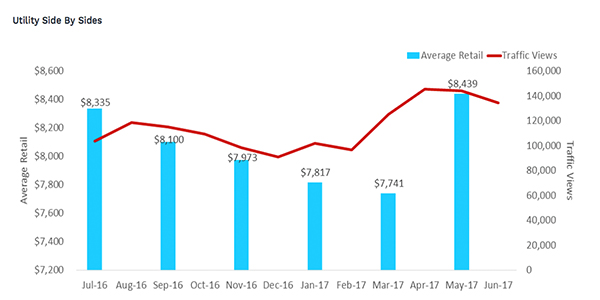 SxS sales are trending up 5% for new and 15% for used, according to NADA. 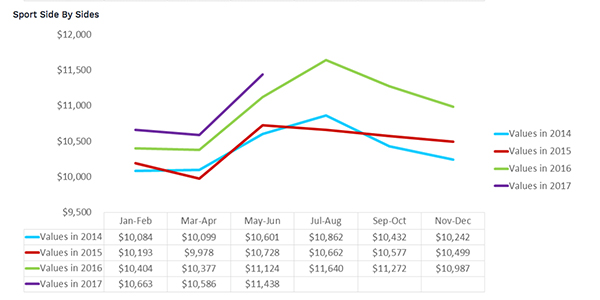 The bottom line for 2017? ATV sales are down slightly YTD, while SxS sales are trending up 5% for new and up 15% for used. More than 410,000 new UTVs will be sold in addition to 200,000+ new ATVs. Look for plenty of action from the new players like Cub Cadet, Textron and Mahindra to spur retail activity in the first half of 2018.