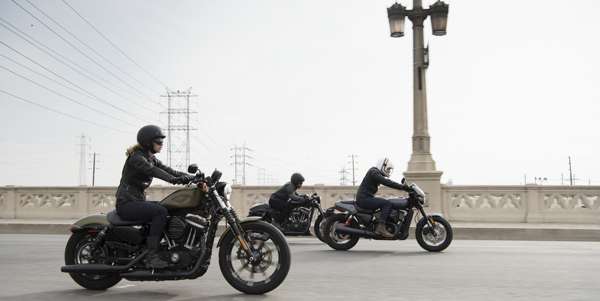 Harley-Davidson reported that its second quarter retail motorcycle sales in the U.S. were down 9.3 percent compared to the year-ago quarter, with the overall U.S. industry down for the same period.

Harley-Davidson worldwide retail motorcycle sales were down 6.7 percent in the second quarter compared to the same period in 2016. Harley’s retail motorcycle sales in the U.S. were down 9.3 percent compared to the year-ago quarter, with the overall U.S. industry down for the same period. Its U.S. market share for the quarter was 48.5 percent in the 601cc-plus segment while international retail sales decreased 2.3 percent compared to the second quarter in 2016. And net income was $258.9 million on consolidated revenue of $1.77 billion versus net income of $280.4 million on consolidated revenue of $1.86 billion for the same period in 2016.

“We are pleased with our ability to deliver strong margins in the quarter despite challenging market conditions, particularly in the U.S.,” said Matt Levatich, president and CEO, Harley-Davidson. “Given U.S. industry challenges in the second quarter and the importance of the supply and demand balance for our premium brand, we are lowering our full-year shipment and margin guidance.”

“Our long-term strategy, focused on building the next generation of Harley-Davidson riders, is our true north. Our new product investment is one pillar of our long-term strategy to build riders globally and we are energized by the strength of our model year 2018 motorcycles coming later this summer,” said Levatich.

The company says its new retail motorcycle sales in the U.S. were down mostly due to weak industry conditions. New retail sales internationally were also down but generally in-line with company expectations for Q2.

Revenue from the motorcycles and related products segment was down in Q2 versus 2016 largely due to lower motorcycle shipments. Operating margin as a percent of revenue increased versus the prior year quarter primarily as a result of mix favorability driven by demand for the Milwaukee-Eight powered touring motorcycles and lower SG&A spending. 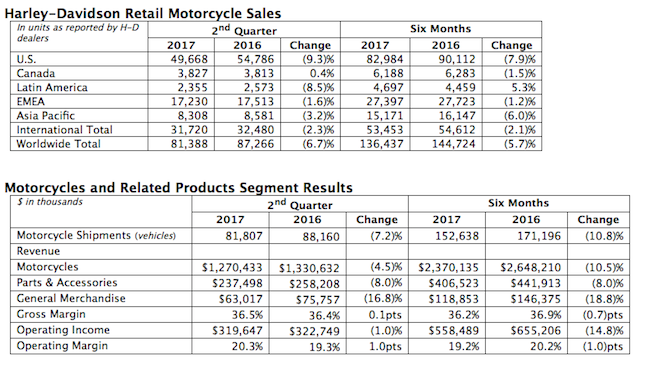 SEMA Show Cancelled for 2020
Connect with us