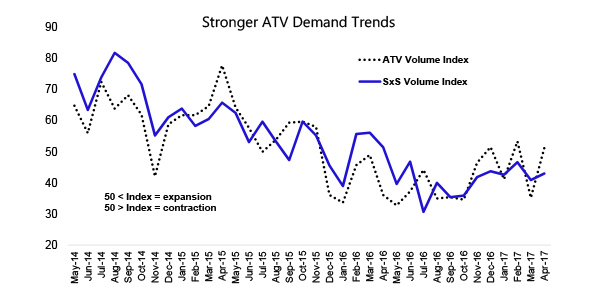 Our latest survey of powersports dealers indicates that the retail sales environment remained weak in March. The general theme in the marketplace is that consumer interest was focused on lower-priced ATV units and utility products from Can-Am, Polaris and Honda.

In the recreational market, Can-Am’s Maverick X3 Max was a major topic of discussion as a few units have started to trickle in at dealerships. Specifically, the initial feedback from dealers is that the unit will be a hit with consumers and should replicate the type of success that the X3 saw in the two-seat market.

New products aside, dealers continue to be very promotional and feel the best way to capture share in the current environment is through aggressive prices – especially considering that the month appears to have deteriorated sequentially.

In the heavyweight motorcycle market, dealerships saw improving traffic trends through January and February, but saw sales fall off in the crucial month of March. Like the off-road market, motorcycle dealers spoke of unfavorable weather conditions in many markets.

The biggest themes of the month are (1) a seemingly growth disparity between top and bottom performing H-D dealers; (2) the mad rush to grab the last Victory motorcycles on the market; (3) and the sharp deceleration of Polaris’ other two motorcycle brands.

H-D dealers seem to be in one of two camps: either they are flooded with carryover inventory or they haven’t had it in months. That said, nearly everyone we have talked to believes that sales will improve as we move through the summer because demand for the new touring bike is only starting to catch on.

So far, we think that April has been less than desirable due to weather, but we are hopeful that consumer demand for powersports and motorcycles will improve soon.