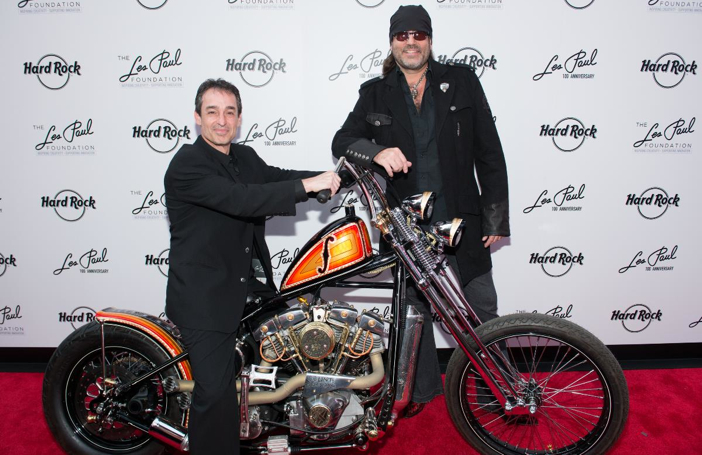 The commemorative motorcycle that honors the music legend Les Paul was built by Danny (The Count) Koker and his team and featured on the hit television series “Counting Cars” on The History Channel. The one-of-a-kind motorcycle was created to commemorate the 100th Anniversary of Les Paul, the man who many call the “Father of Modern Music” and was unveiled in Times Square on June 9, 2015. The appearance in Cleveland will mark the first time the elaborate custom motorcycle will be publicly exhibited.

Les Paul invented the solid-body electric guitar, multi-track recording and numerous other recording techniques. As an inventor Les was always creating from ordinary things he had in his studio or home.

The motorcycle was created and designed in the way one would expect Les Paul to create it. Using vintage and unusual parts that were already available in the garage and studio, Count’s Kustoms team produced a bike with elaborate detail and homage to Paul. Highlights of the chopper include a hand- tooled leather seat engraved with Les Paul’s signature, Les Paul mother-of-pearl inlay on the fender, an oxygen tank used as an extra gas tank, 100th Anniversary engravings, a hand-painted gas tank featuring Les Paul’s portrait, a chain guard designed as a guitar pickguard, gold leaf hand turned headlights, custom Les Paul risers, volume knobs on the engine head and much more. The motorcycle was the subject of a recent “Counting Cars” episode on The History Channel. To view go to: https://www.youtube.com/watch?v=R5XMKUOm0pk

The Les Paul 100th Anniversary Commemorative Motorcycle will exhibit at the Progressive International Motorcycle Shows on the red carpet in the East & West High Bay. The public is welcome to view the bike before it leaves Cleveland for the Chicago IMS show. Cleveland played a big role in Les Paul’s career. As an inductee to the Rock and Roll Hall of Fame, Paul is the subject of a permanent exhibit. The Rock Hall also produced the last tribute concert honoring Paul before his death. 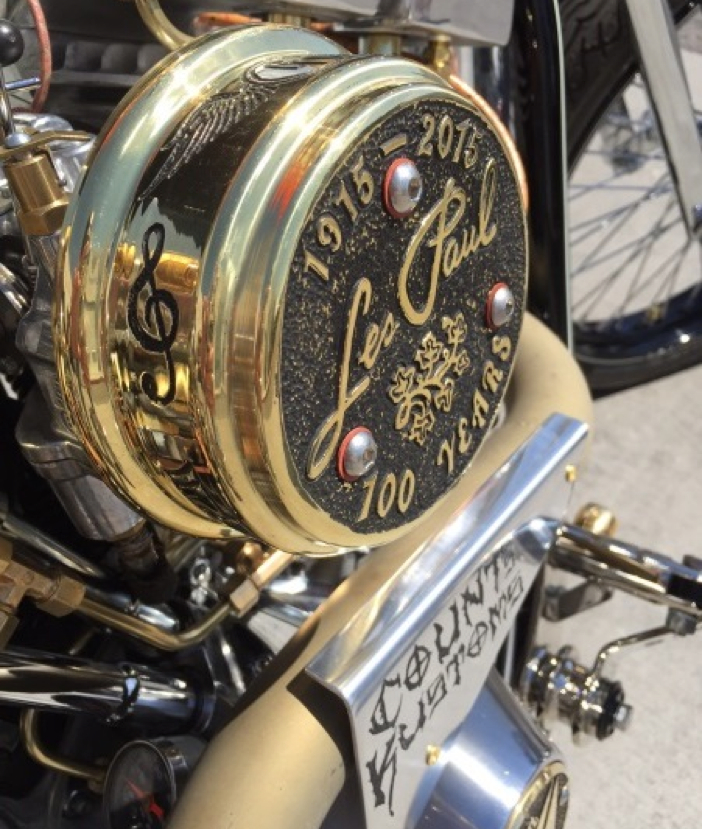 The 2015-2016 IMS Tour feature the world’s leading manufacturers and attract thousands of motorcycle and riding enthusiasts across the U.S. The Progressive International Motorcycle Shows are the ultimate destination to experience the powersports culture, talk to brand and industry experts and shop the marketplace.