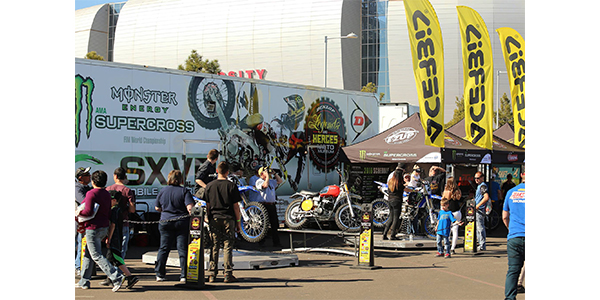 The tour will appear at each round of the Monster Energy Supercross Series in 2019 and kicked off on Jan. 5, at Angels Stadium of Anaheim in Anaheim, CA.

The Legend and Heroes Tour Traveling Moto Museum announced that they will again take part in the pit party activation at Monster Energy Supercross events in 2019. This year marks the 10th anniversary of the tour and their mission of celebrating the Legends and Heroes of the sport.

The tour will appear at each round of the Monster Energy Supercross Series in 2019 and kicked off on Jan. 5, at Angels Stadium of Anaheim in Anaheim, CA. It then crisscrosses the nation with 16 additional stops along the way before coming to Las Vegas, NV, for the series finale on May 4.

With the help of tour sponsor EZ-Up Shelters, the new for 2019 design will feature a walk-through timeline that celebrates all of the sports supercross champions, and since 2019 marks the 45th season of AMA Supercross, a unique feature will showcase the first champions and their machines. The tour stands behind the belief that “We Don’t Leave History Behind” and has kept the founding fathers, and mothers, pure in their thoughts by honoring the men and women that shaped supercross and motocross into what it is today.

During opening ceremonies at each event, the tour honors a different legend of the sport. For the opening round in Anaheim, the tour will honor Troy Lee.

The original helmet painter of the stars, Lee has painted helmets for most of the supercross champions. Who can forget the flashing lights and hundred dollar bills on Jeremy McGrath’s Anaheim helmets during his championship era? More than a painter,Lee is an entrepreneur with a successful action sports apparel company and the team owner of the Troy Lee Designs – KTM Supercross team.

Following on the success of its introduction in 2018, the Supercross Virtual Reality mobile experience (SXVR) continues in 2019. This interactive display allows fans to experience the thrill of supercross via VR technology and feel like they are on the racetrack. In addition to four virtual reality stations, the experience includes two racer skill stations. Produced by Ryno Equipment, the handlebar station, and balance station allow guests to test themselves and experience the what they have to be supercross athletes.

Thanks to local friends at each round, the Legends Tour features some of the best vintage motocross bikes on display in a single location. Featuring different vehicles at each round, guests can relive the machines of their youth and show their family and friends the early days of motocross and supercross.

Look for the Legend and Heroes Tour Traveling Moto Museum at each round of the Monster Energy Supercross series in 2019.

Legends and Heroes Tour Returns for 10th Anniversary Season in 2019