We explore how one bike sparked a movement of unique, hand-built, custom creations – and how that movement still thrives today. 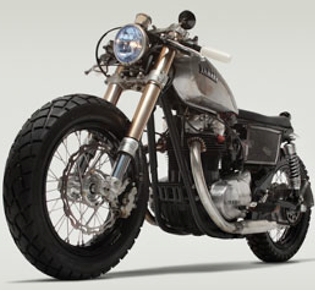 The Yamaha Virago 920 was a lot of things. Introduced in 1982, it was part of the Japanese manufacturer’s early attempts to enter the cruiser market, a big V-Twin-powered motorcycle with a monoshock and flat bars. The mixture was odd — the bike wasn’t a cruiser, nor was it truly European.

Despite the confused image and poor sales, the bike is an interesting piece of history. At best, you might call it the bridge between current Japanese cruisers and the early 1980s UJM. You would never classify it as good-looking or even mildly attractive. And cool? Seriously, no.

Enter John Ryland of Classified Moto, a customization shop in Richmond, Va., that turns everything from Buells to XL600s into rideable customs. Ryland grafted an ’09 R6 front end and ’08 R6 rear swingarm to an XV920, capped it with a pitted steel Benelli Mojave 360 tank, dirt bike tapered handlebars, a tiny seat, big brakes and wider rubber. He stripped off fenders, and hung on just enough gauges and switches to pass inspection.

The result is a raw lump of rideable machine, with gobs of torque, a semi-sporting position and, well, sex appeal.

The custom 920 was more than just cool. The bike sparked a revolution. Greg Hageman, a farm boy from Iowa and former Harley-Davidson mechanic, is the owner of Doc’s Chops, a customization shop in Tampa, Fla., that specializes in Yamaha XS650 and Honda CX500 customs. A customer asked him to do a XV920 as well, and the bike that he built fueled the flames of 920 fever.

Google “XV920” today, and you’ll find page after page of posts about the bikes, ranging from questions about cam timing and dual-carburetor upgrades to dozens of magazine and website articles featuring XV920s built by the leading lights of this new wave of custom machines.

Many of those search results lead you to features on Bike EXIF, a website dedicated to new wave customs and founded in 2008. Run by Chris Hunter, a former creative director from London, England, who is currently located in New Zealand, the stylish site features in-depth coverage of one interesting custom motorcycle per day. The customs are hand-built machines, most with wide rubber, modern components and flat bars. Large percentages are Japanese from the 1970s and 1980s, but the site also features European makes as well as Harley-Davidson customs.

While the customs range across all spectrums, they are definitely not the heavily chromed and garishly strung out choppers you see on Discovery Channel shows like American Chopper. Most of the new wave customs are stripped down to a bare essence, have sticky rubber and flat bars, and a compact urban ethic.

The bikes are hot. Bike EXIF is one of the most popular websites in our niche, with a monthly average of 2 million page views and more than 450,000 unique visitors (which is comparable to Cycle World magazine, which had a monthly circulation of 236,129 as of December 2012). New wave customs attract attention among celebrities and other members of the visible upper class. Katee Sackhoff of Battlestar Galactica fame rides a Classified Moto KT600. Jay Leno (of course) is also a Classified Moto fan.

According to Hunter, the movement toward these bikes has been around for awhile.

“I think a lot of it is how visible the movement is. It’s always been a thriving part of the scene, but it hasn’t received much publicity. Websites like Bike EXIF have thrown the spotlight onto non-chopper bikes, and by doing so, have fueled the fires and helped to grow that side of the scene. We’re also satisfying a need for individuality, with people more inclined to make things ‘their own’ by adding a personal touch. Mass production and higher living standards have made products more affordable, but at the same time, they’re ubiquitous. A custom bike is a reaction against that.” 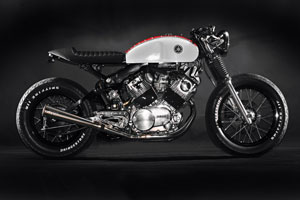 David Edwards is the editor of BikeCraft magazine, a recently launched publication focusing on the new wave customs. “Custom bikes have always been cool,” he said. “It’s just that in the late 1990s and early 2000s, things got a little out of hand. Fueled by several builder shows on television, choppers became more expensive and, unfortunately, more difficult to ride, until most were purchased by rich older guys as lifestyle accouterments. Decidedly uncool.”

The old school heavy metal choppers with oceans of chrome and Harley-inspired power plants were all the rage for awhile, commanding six-figure prices. That fashion wave collapsed under the weight of a crushing economy (and possibly boredom with Maltese crosses).

That world has returned back to center, which means the diehards who loved choppers since Peter Fonda still love and buy choppers, and the guys who love making them continue to do so.

The younger crowd has uncovered their own custom wave. “The under-35 crowd rediscovered café-racers and bob-jobs, sometimes reinterpreted as café-bobbers,” Edwards said. “Base bikes have one thing in common — namely, they’re cheap, so we’re seeing used Evo Sportsters, older Hinckley Triumph Bonnevilles and four-cylinder CB Hondas from the 1970s.”

People are out there buying bikes most would have considered junk five or 10 years ago. The rise of the 650 twins isn’t so surprising, and people have been into Yamaha 500 singles for a while. Nevertheless, this has gone far beyond that. Remember the CX500? The Honda V-Twin that was a confused mix of touring bike and cruiser? Yeah, that’s the one the new wave custom set loves.

How about the NX650? Another misplaced child of a machine that was part street bike, part urban dual-sport, and had a gloomy rounded fairing that further muddied the waters on what the hell this bike was supposed to do. Go out for a latte in a small Bolivian town with slightly beat-up pavement? I don’t know, and the people who did and were willing to pay for the thing were shockingly low in numbers.

Well, yes, the NX650 is one of those bikes custom guys are turning into gold.

The cultural drivers are not so hard to understand. Throw the economy in the tank and jack up gas prices, and interest in motorcycles rises. They are cheap and get good gas mileage. If you have only $20 to get through the week, a small motorcycle stretches it a little further. The machine is cheap, the gas mileage is astronomical, insurance is cheap, and if it breaks and you aren’t scared of a wrench, you can fix it.

This is the universe Honda 400 twins and single-cylinder dual-sports thrive within. 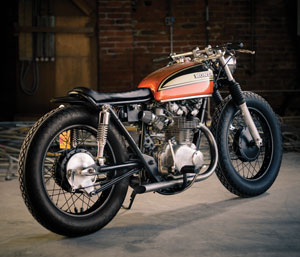 So go back to 2007, and what happens? Gas prices up, economy in the tank, and the only bikes that sell are cheap and small. For a while, you couldn’t lay your hands on a Ninja 250 to save your life.

That trend killed choppers, and it also turned a whole generation of young kids into motorcyclists. Those kids, by the way, had a helluva time getting jobs.

Those kids have grown up a bit, and some of them have jobs. Good jobs, as it turns out.

“[The Bike EXIF] core demographic is 25-44 and earns over $100k a year,” said Hunter. “Many of these people don’t find twitchy, plastic-covered sport bikes interesting, and they’re not interested in 600-pound cruisers either. They don’t read the mainstream motorcycling press, and they wouldn’t be seen dead in Tucker Rocky gear. However, they like the style and cool factor of bikes, and the freedom that bikes offer in an increasingly regulated world. The question for dealers is, how do you get these people into your shop?”


For one thing, large portions of enthusiasts are doing their own customization work.

“I like one thing I’m seeing, and that’s young riders not afraid to pick up tools and work on the bikes themselves,” Edwards said. “I think bike shops would do well to downplay gee-gaws and expensive billet pieces. What used to work on cruisers isn’t going to cut it on a café bike or bobber.”

Hunter agrees that a shift is needed to cater to the new audience, but points out that many of the brands are moving in the right direction.

“I think Harley dealers have traditionally been pretty good at offering their customers individuality, whether it’s bolt-on parts or heavier custom jobs. So they just need to stay ahead of the trend in the bikes and parts that they offer, now that the dark custom style is well established. For other marques it’s probably a chance to catch up, and most of them are busily doing that. Triumph is getting more involved in the custom scene, and so is Moto Guzzi. In Europe, Yamaha is hooking up with custom builders to create one-offs. If I were a dealer, I’d be looking to showcase what can be done to the bikes I sell.”

Advertisement
In this article:Industry Profiles