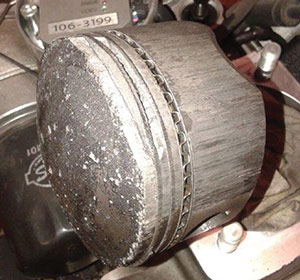 When you were learning to drive, your dad probably told you not to rev the snot out of his car. OK, his car – his rules. 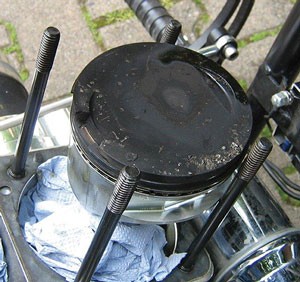 Game Over! This engine was obviously lugged. A piece of the top ring land broke off and trashed the combustion chamber. You can see the damage on the top of the piston.

When you were learning to drive, your dad probably told you not to rev the snot out of his car. OK, his car – his rules.

Fast forward to today, but think V-Twin motorcycles. It appears that an awful lot of people took the old man’s warnings to heart. They call it “babying” and think they’re doing their engine a favor. However, the S&S Tech Department has way more calls about engines failing due to lugging than having the snot revved out of them.

Consider this scenario. A guy, or gal (let’s share the blame here), is cruising down the road at 55 mph in sixth gear and the engine is turning a little over 2,000 rpm. When he or she needs to pass a car or go up a hill, he or she just opens the throttle and goes. That’s actually worse than downshifting and winding it up, and he or she could be hurting his or her motor. We call it “killing it with kindness.”

It’s pretty easy to tell if an engine has been lugged. The top ring land of the piston gets really hot and small amounts of fuel detonating beneath it tend to push it up under the valve pockets, the weakest area. In moderate cases, it looks like the piston is smiling – the beginning of the end.

Why’s that? If you’re traveling in high gear, at a fairly low rpm, the BMEP (Brake Mean Effective Pressure) in the combustion chamber is going to be higher than if you shifted to a lower gear and increased the rpm. In the higher gear, you have to give it a little more throttle to make it go. That’s because it takes more force to turn the rear wheel, and since there are fewer combustion events doing the work, each combustion event has to release more energy. The resulting temperatures and pressures are proportionately higher. If you “lug” the engine to a sufficiently low rpm, these increased temperatures and pressures will become destructive. It’s gonna turn real ugly sooner than you think. 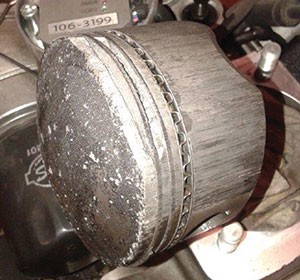 Resist the temptation to limp it home. When something bad happens, shut it off! This rider didn’t… “Bring your checkbook, Daddy!”

When combustion chamber pressure and temperature gets high enough, knock, detonation and pre-ignition will occur. If you don’t stop it, it will destroy your pistons. It’s pretty easy to tell if an engine has been lugged.

The top ring land of the piston gets really hot and small amounts of fuel detonating beneath it tend to push it up under the valve pockets, the weakest area. In moderate cases, it looks like the piston is smiling – the beginning of the end. In more advanced cases, a piece of the ring land breaks off and very quickly trashes everything in the combustion chamber – Game Over.

It’s really simple to avoid these problems. Shift down when you need to. If you feel the engine chugging or jerking, or if he can hear the sharp metallic clicking of detonation, do not let it continue! Get out of the throttle or shift down.

We recommend that riders keep the rpm around 2,800-3,000 at highway speed. If that means sixth gear on secondary roads is not used, that’s OK. Reserve sixth gear for the interstate where the bike can be clicked it into sixth and the rpm kept up around 3,000 at cruising speed.

Riding in a lower gear puts less strain on the engine. The work of moving a bike down the road is divided up between a greater number of combustion events, so each event does less work, produces less heat and combustion chamber pressure is reduced.

Besides, the oil pump is able to maintain better oil pressure and scavenge oil from the crankcase better. All in all, a happy engine.

You owe it to not only your customer, but to yourself to tell your customers the facts of life. It won’t be as awkward as when the old man did it, and it can save you and your customer a lot of heartache, and best of all a lot of money!

So tell ’em to wind that bagger! Rev that trike! They’ll love you for it!

Killing It With Kindness