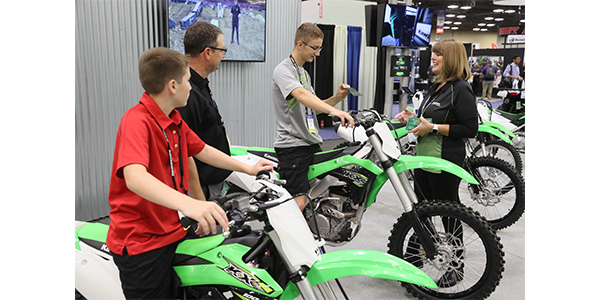 AIMExpo presented by Nationwide welcomes the return of Kawasaki Motors Corp., U.S.A. for the 2018 event, representing the brand’s fourth year as an OEM exhibitor.

The American International Motorcycle Expo presented by Nationwide welcomes the return of Kawasaki Motors Corp., U.S.A. for the 2018 event, representing the brand’s fourth year as an OEM exhibitor. The renowned Japanese manufacturer will host both global and North American debuts of multiple 2019 models inside the Mandalay Bay Convention Center in fabulous Las Vegas on Oct. 11-14, in addition to an extensive display of the latest two and four-wheel models and demos of select street motorcycles at AIMExpo Outdoors!

“AIMExpo provides an ideal platform to introduce new products to dealers, media, and consumers all in one place,” said Bill Jenkins, senior vice president of sales and operations at Kawasaki Motors Corp., U.S.A. “This year we will not only showcase many new models in the US market but also be hosting a worldwide debut on Thursday at 10:00 a.m., which is a fantastic opportunity for our dealers and media to be a part of.”

Over the years, Kawasaki has used AIMExpo presented by Nationwide as a platform to showcase many of its most innovative and high-profile vehicles. With a range of models that includes the engineering marvel of the surpercharged Ninja H2R, the all-new Ninja 400, the fun and nimble Z125 PRO, and the ultimate utility of the MULE side-by-side lineup, Kawasaki has continuously leveraged the show’s platform to its fullest potential. This year, attendees will also have a hands-on opportunity to ride a variety of Ninja, Z, and Vulcan models at AIMExpo Outdoors!

“AIMExpo gives us the platform to immerse our dealers and customers in the Kawasaki brand,” said Chris Brull, vice president of marketing at Kawasaki Motors Corp., U.S.A. “We saw an added opportunity with the move to Las Vegas as a chance to engage, excite, and educate a large contingent of west coast riders in all of Kawasaki’s new models, as well as give them the opportunity to experience and ride a number of those models at the outdoor demo space.”