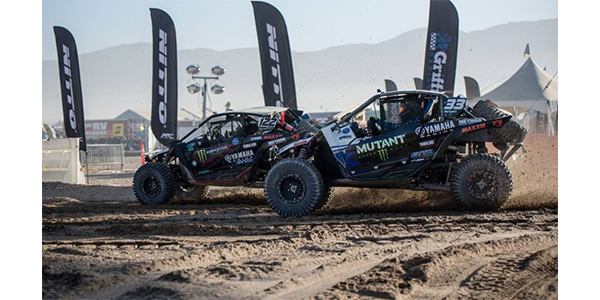 Johnny Greaves is the only racer in history to win championships in all four professional classes. It is no wonder that Johnny’s son, CJ would follow in his footsteps.

Racing is typically a family affair. If a parent rides, they are most likely going to share their love of racing with their children. That case holds true with the father-son team of Johnny and CJ Greaves.

The Wisconsin native, Johnny began racing motocross when he was 12 years old, switching to four wheel racing by age 23 and soon after, racing in the SCORE off-road desert and the SODA short-course off-road series (early Championship Off Road Racing) and the current TORC series.

Johnny is the only racer in history to win championships in all four professional classes. It is no wonder that his son, CJ would follow in his footsteps.

In 2010, CJ joined the racing circuit in motocross, like his father, when he was a teenager, moving up into small truck and buggy racing, now competing in the same events as his father.

In February 2018, the team took on the King of the Hammers race in Johnson Valley, CA. This race is the toughest, single day event, and the largest in North America, with nearly 60,000 in attendance. This 202-mile race combines the open trails and high speeds of desert racing with brutal rock sections consisting of huge rocks, boulders and near vertical canyon walls.

The Greaves team took-on KOH in the UTV class. Out of the 118 UTV entries, only 12 finished the 7 ½ hour race. CJ and his copilot Devin Haws placed fifth while Johnny and copilot Rodney VanEperen crossed the line in sixth place, both racing on Maxxis Roxxzilla tires.

Keep an eye out for the Greaves team, racing next at ERX Motor Park in Elk River, Michigan on July 13-14.

Advertisement
In this article:King of the Hammers, Maxxis, racing, UTV