In the last few years, it has become possible to not only display classic bikes, but to sell new bikes with that classic appeal. Customers who prefer old-school styling and simple, comprehensible mechanics now have several alternatives to buying an old bike with an uncertain history.

The staff at Munroe Motors in San Francisco have to spend a lot of time washing the windows of the dealership. The problem is not the famous San Francisco fog. It’s the people on the sidewalk, leaning on the glass, staring at the bikes.

Although Munroe floors a lot of eye candy — MV Agustas, Ducatis and high-end Triumphs — one of the bikes that stops passers-by in their tracks isn’t either pricy or powerful. It’s a Royal Enfield: a close replica of a 500 cc single cylinder motorcycle designed in England more than 50 years ago.
“We started off in 2011 with two,” says Samson Ng, general manager at Munroe’s. “We sold out immediately. Every time we get one in, it disappears. People love the way they look. They are easy to ride and easy to maintain. They sell themselves.”

“The classic motorcycles are like classic cars,” says Jeff Saunders of Z1 Enterprises. “People in their 40s and 50s associate them with their youth. They were the desire of our youth, and a classic looking bike reignites those memories.”

Motorcycle dealers have long known that one of the best ways to increase foot traffic is to put a vintage motorcycle on display. In fact, many retailers whose wares have nothing to do with bikes, vintage or otherwise, will put a Harley Panhead or a Triumph Bonneville in the window as a way to add excitement to face cream or work boots. “One of our bikes is a traveling parade,” says Jon Bekefy, director of strategic marketing communications for Ural.

In the last few years, it has become possible to not only display classic bikes, but to sell new bikes with that classic appeal. Customers who prefer old-school styling and simple, comprehensible mechanics now have several alternatives to buying an old bike with an uncertain history. With increasing interest in classic motorcycles, manufacturers large and small are building updated replicas of vintage two-wheelers. Properly handled, an added line of vintage-look bikes can have many benefits for a retail dealer. These motorcycles share much of the crowd-pleasing appeal of the real thing. Although the motors are built to close tolerances and don’t leak oil, the lights are bright and the brakes work. That pleasing old bike aura is definitely there. “We deliver a timeless look and feel, but with a two-year warranty,” says Ural’s Jon Bekefy. 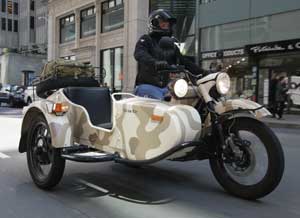 A classic bike in every price range
New bikes built with a vintage design come in a wide variety of configurations and price ranges, allowing you to choose a line of machines that will be most appealing to your customers.

The resurrection of one top of the line motorcycle took place recently at the Quail Motorcycle Gathering, which has been called the Pebble Beach of antique motorcycle shows. Michael Schacht, president of the new Crocker Motorcycle Company, started up the first new Crocker in 70 years and drew a crowd four and five deep.

The original Crocker company was a small factory that built speedway racers and very fast sport twins in Los Angeles during the ‘30s and ‘40s. With the passage of time, Crockers have become legendary, and surviving Crocker twins change hands for the price of urban real estate.

The new Crocker company has a prototype finished and is in the final stage of the testing process. It is visually identical in appearance to the original twin, with a three-speed, hand-shift transmission and kick-start. However, the bike has benefited from modern alloys, CAD design and machining to close tolerances. 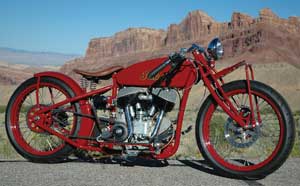 “We are dialed in, with the bike engineered front to back, and are extremely pleased with the results thus far,” says Michael Schacht. “We are planning to sell a limited number of these very special motorcycles, and like the original Crocker, the customer can choose color, the type of electrical system, and displacement to some degree. Our stock Crocker engine displacement will continue to be 61 cubic inches, as were the originals. The prototype Big Tank is 80 cubic inches, as were their fastest examples of the day.”

The Crocker company plans to market to “very knowledgeable motorcycle enthusiasts who want a special bike.” Schacht is working with one Southern California dealer at this time and is willing to consider working dealers in other parts of the United States.

Unlike the owners of the new Crocker, Ural riders will never have to explain themselves to an agitated Highway Patrol officer, but their bikes stir just as much emotion. Originally a Russian reverse engineering of a World War II BMW, the Ural has evolved into a reliable mount with a lot of low-end torque. “It’s a living, breathing bike,” says Jon Bekefy. It usually comes hitched to a sidecar, although a solo Ural has recently become available. Bekefy continues: “It’s a combination of the classic BMW Airhead engine architecture with modern brakes [Ural uses Brembo] and suspension. Both the ride and the emotions delivered are fantastic.”

An interest in the Indian motorcycles built in America between 1901 and 1953 is often a family tradition. The brand has been successfully revived, and now Indian enthusiasts have two versions to choose from. The Indian Motorcycle Company, a subsidiary of Polaris, powers its Chiefs with a 105 cubic inch overhead valve V-Twin engine built in Osceola, Wis. However, purists who want their ride powered by a sidevalve engine, like the one that graced the classic Indians, gravitate to the motorcycle built by Kiwi Indian of Riverside California. “We have a different market and a complimentary product,” says Mike Tomas, president of Kiwi.

Interestingly, the ups and downs of the economy have not affected Kiwi at all. “Every time there is a recession, the more my business grows,” says Tomas. “Guys find value putting money into something they can ride and enjoy.”
The Kiwi Indian is a custom-built machine with a lot of options, including an electric start. The vintage look side covers hide a modern four-speed synchromesh transmission. “Although our bikes are made on modern machinery, we put old-time craftsmanship into our bikes,” says Tomas. Kiwi prides itself on the reliability and maintenance-free operation of its motorcycles.

Replica demographics
The different types of vintage motorcycles appeal to different customer demographics. The Enfield is bought by a variety of urban riders, many of whom are younger than most vintage bike enthusiasts. “We get guys coming off scooters, and folks who wanted one in the ‘50s and ‘60s,” says Ng. “One big market for us is people coming back from tours to India. Indian motorcycle tour operators put the tour group on Enfields and ride up the foothills of the Himalayas. Guys are impressed and want to buy one when they get back.”

Up until last year, the market for Urals was at first, older people and disabled veterans who want to ride but can’t hold a two-wheeler up; second, hunters and farmers who live in remote areas; and third, enthusiasts who are interested in riding and camping off-road. Recently, with the update of Ural’s Web site and a foray into social media, younger people who have become interested in a vintage look and feel are buying Urals.

Bekefy has been surprised by the number of women who have specifically searched for Ural on the Internet. “We have two women we know of who are touring the country on Urals.”

Another classic-look motorcycle that appeals to women is the SYM Wolf Classic, a 150 cc air cooled single cylinder job that evokes the Honda 125 of the ‘70s. Light, inexpensive and easy to ride, it has been estimated that 80 percent of buyers are women looking for an affordable, easy-to-handle vintage look bike with cafe racer styling.

Both the Crocker and Kiwi Indian appeal to a sophisticated audience who often own classic motorcycles. “Our customers are between late 30s up to 70s, and middle to upper income. They are discriminating buyers who are very particular. They want something unique they don’t have to work on often. They like Harleys, but want something different,” says Tomas.

Managing expectations
It’s not possible to make a bike that has both the simple mechanics and classic appearance of a vintage machine and many of the advantages of modern technology. There’s more maintenance, and top speeds are lower. Drum brakes may look cool, but they don’t stop like ABS triple discs. As Ng says, “It’s up to the salesman to set expectations, to be up front with limitations. Each bike has its own purpose. If a customer buys the wrong bike for the wrong purpose, the bike will get a bad reputation, and it’s not the bike’s fault at all.

“The Royal Enfield is a fun bike, but you have to remember it’s a 500 pushrod single,” continues Ng. “You can get 75 to 80 mph out of it by wringing its neck. The owner also has to remember that the bike is hand-built in India. Quality control is OK, but little things need to be checked for — just like on bikes from the ‘50s and ‘60s. Someone who knows how to spin a wrench, who enjoys tightening bolts and adjusting the chain, will really like the Royal Enfield. It’s such simple technology. Someone who wants a turnkey motorcycle, who doesn’t want to spend 10 minutes checking it over won’t.” 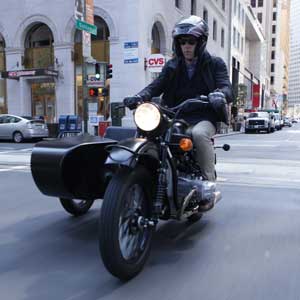 Classic bikes are different and interesting, and will create interest and excitement for your dealership. “The Guggenheim Museum said the Crocker was one of the most beautifully designed motorcycles ever, and we agree,” says Michael Schacht of Crocker Motorcycles. “We give customers the ability to own the Dusenberg of motorcycles with the identical look to the classic bike, but modern CAD design of parts, close tolerances and long distance reliability.”

“Some of our best success stories are primarily BMW or European motorcycle dealers,” says Bekefy of Ural Motorcycles. “People will go to the dealership just to see the bike. A Ural offers a dealer a chance to show something different. Further, Ural’s don’t compete, they add sales. People will buy the bike of their dreams and then come back and buy a Ural. Return customers buy a Ural. It’s a symbiotic relationship.”

“Displaying classic bikes and selling retro bikes brings a sense of nostalgia to a dealership” says Saunders. “The bikes reignite an interest in motorcycles. It’s an attraction, the look more than anything. By rekindling that interest, you may end up selling to a person who had no intent to buy another motorcycle.”

Advertisement
In this article:Sales & Marketing