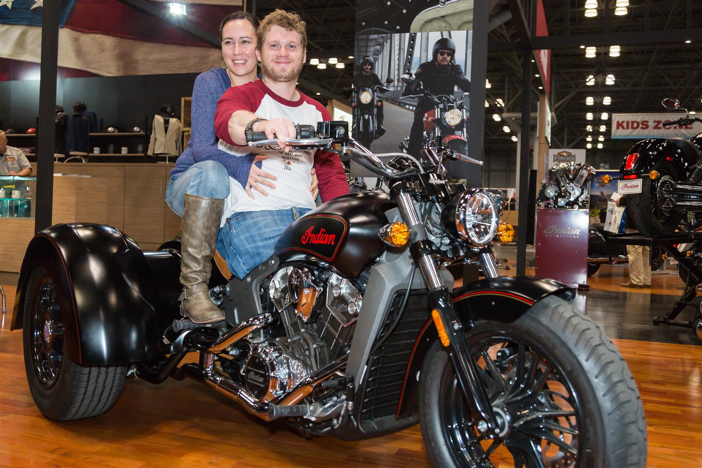 Indian Motorcycle recently announced its continuing sponsorship of the Veterans Charity Ride to Sturgis for 2016 and is expanding its level of sponsorship this year. A veteran from the inaugural event was surprised with the gift of a customized Indian Scout.

Indian Motorcycle recently announced its continuing sponsorship of the Veterans Charity Ride to Sturgis for 2016 and is expanding its level of sponsorship this year. A veteran from the inaugural event was surprised with the gift of a customized Indian Scout by the Veterans Charity Ride and Champion Sidecars & Trikes last Friday at the International Motorcycle Show in New York City. Veteran Marine Sean Carroll, wounded in the first Iraq war, participated in the 2015 ride and was positively affected by the motorcycle therapy provided by the ride.

“While serving in Iraq in 2004, 21-year old Sean was gravely injured from an IED (Improvised Explosive Device), resulting in the loss of his right leg and several fingers. Injuries such as this can take years to recover from. We wanted to do something special for Sean, giving him back a part of his life and his love of motorcycles,” says Dave Frey, founder of the Veterans Charity Ride and producer at Full Vision Productions. “Veterans Charity Ride and our supporters were so moved by his story, and seeing the results of the inaugural ride, we donated the money to purchase a new Indian Scout for Sean. We contacted Champion Sidecars & Trikes, who had donated the sidecars that Sean rode in, and they were immediately onboard with providing the first prototype trike kit for the new Indian Scout so that Sean could ride a motorcycle again.”

“Appreciation and support for our military and our veterans is core to the Indian Motorcycle brand,” said Steve Menneto, President of Motorcycles for Polaris Industries. “The success of the program was clear to us in Sturgis last year as these brave men and women rolled in to town. Helping our veterans after serious physical and mental injuries is an important cause, and we’re proud of offer our continued involvement and support. We look forward to the positive effects and results of this program year after year.”

Craig Arrojo, president of Champion Sidecars & Trikes is also committed to the Veterans Charity Ride in 2016, and had this to say, “The popularity of the Indian Scout and the request to do this trike project for Sean was an easy ‘yes’ for us. Dave Frey and this program really showed us how our products can be a big part of a veteran’s recovery. Our design engineering team and staff stepped up to get this project fast-tracked so Sean could ride with his fellow veterans next year.”

The ride departs Los Angeles on July 30 en route to Sturgis, SD and culminates at the 76th annual Sturgis Motorcycle Rally. Over the course of the nine day journey, 15 veterans will ride America’s most scenic backroads, experiencing iconic landscapes from the seat of an Indian motorcycle as an important part of their personal healing process. Several of the Indian models will be customized with Champion sidecars to accommodate riders who are unable to operate a motorcycle themselves due to their injuries.

Veterans seeking assistance and those wishing to view videos and stories of the past ride can logon to www.VeteransCharityRide.org for more information including details on partner organizations offering assistance and services for veterans and their families.