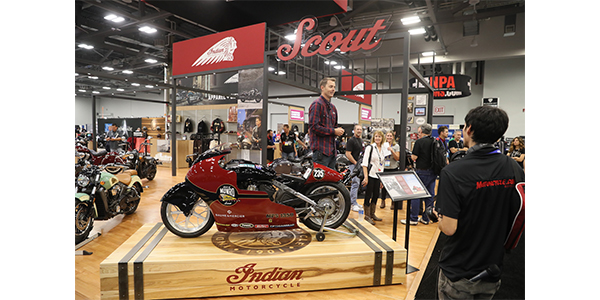 The American International Motorcycle Expo presented by Nationwide welcomes the return of Indian Motorcycle as an OEM exhibitor for the 2018 event.

The American International Motorcycle Expo presented by Nationwide welcomes the return of Indian Motorcycle as an OEM exhibitor for the 2018 event. The storied Minnesota-based manufacturer will showcase its latest lineup of V-Twin motorcycles inside the Mandalay Bay Convention Center in Las Vegas on Oct. 11-14. Indian Motorcycle will also have a presence at AIMExpo Outdoors!, where it will host demo rides of its new model lineup.

“We felt it was important for America’s original motorcycle brand to have a presence at the country’s premier powersports trade show, and our experience at AIMExpo last year provided us with unparalleled access to dealers, media and consumers,” said Reid Wilson, senior director for Indian Motorcycle. “We recognize the value the show provides and the vital role it plays in the industry, and with the move to Las Vegas we wanted to make sure we’re a part of AIMExpo’s west coast debut. It’s a great opportunity to showcase our latest models and provide demo rides of the Indian Motorcycle lineup to all attendees.”

Thanks to its distinction as America’s first motorcycle brand, Indian Motorcycle is in the midst of a resurgence that has been amplified by the on-track dominance of its factory and privateer racing teams in American Flat Track and its hugely popular lineup of flagship Scout models, which will be showcased in Las Vegas.

Additionally, the newest models for Indian Motorcycle’s Chief, Springfield, Chieftain and Roadmaster lineups will also be featured. Each model will be available to ride at AIMExpo Outdoors!, while also being prominently featured on the exhibit floor with the recently unveiled custom motorcycles from non-professional builders from The Wrench: Scout Bobber Build Off competition.

“Indian Motorcycle is the hallmark brand of motorcycles in America, and their desire to utilize the AIMExpo presented by Nationwide platform to reach every facet of the industry under one roof will be well received with the contingent of media, dealers and consumers making the trip to Las Vegas,” said Cinnamon Kernes, show director. “They are taking full advantage of the opportunity the event provides with a prominent presence both indoors and outdoors. With the addition of Powersports Industry Week and an even larger contingent of enthusiasts descending on the strip, Indian Motorcycle is sure to see a high volume of traffic.”

Indian Motorcycle to Return to AIMExpo presented by Nationwide