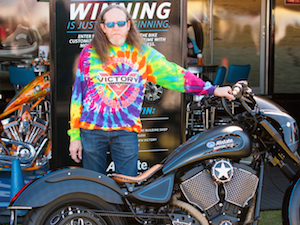 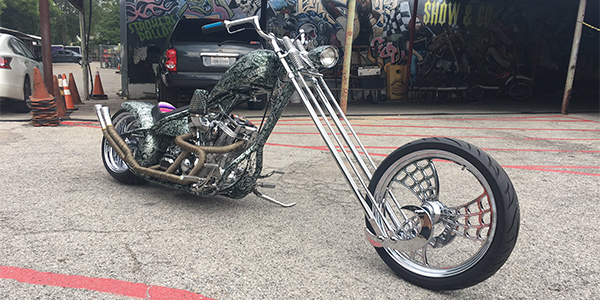 Dear Ma, I hope you’re well up in Heaven, we are good here in Dallas! Things are busy and we are building several really cool bikes. Recently I was giving a tour to some people, and at the end of the tour, a lady asked me where I get my ideas from. She laughingly insinuated that I must’ve done some heavy drugs at some point in my life. WRONG!

I’ve always been against any mind-altering drugs. I figure the way my mind works I couldn’t risk any further damage! Creativity just seems to come naturally to me. Usually, I see a bike in my head before we turn a single wrench. I don’t know if that’s a blessing or a curse. Reason being, I am always re-envisioning bikes that sometimes I just need to leave alone.

For instance, when I look at some of the bikes we built several years ago, I will redesign them in my head without even intending to. It just kinda happens and it’s not always intentional. Most of the time I can stay strong and leave the bike the way we originally built it. But recently I was looking at my Tattoo Chopper that we built 18 years ago. It is a fantastic Chopper that rides great and stops traffic wherever I ride her. Many people that visit my shop have told me that the Tattoo Chopper is their favorite custom bike ever! But I have a plan in my mind of what I would like to do to the bike if a redesign ever came up that is.

So I thought I really needed a new exhaust because the old one was from the 1990s and dated looking. But I didn’t see an “off the shelf” exhaust that was cool enough for the Tattoo Chopper, so I decided that we were just gonna have to custom build one here in-house. We built a badass exhaust with the two header pipes upsweeping into four! Then we handmade some tips for the four ends. Well, as long as we were going that far, I might as well ditch my old, heavy, out-dated, 5” open primary for a really cool BDL 2” open primary! Sounds good to me!

So it just makes sense that if we were gonna go that far, we might as well make some new handlebars. Then I figured we would be done. But we weren’t done! I sat back and looked and it hit me that what would really make this chopper look much better and handle much better is a Sugar Bear Springer Front End! Wait a minute, Fairless (I thought to myself)! That’s a lot of dough and a lot of time to replace an already cool front end. I lost or won, depending on how you look at the situation. Just so happened that my pal Sugar Bear was coming to Dallas, so I figured it was meant to be.

When he got here we took some measurements and as usual, Sugar Bear fixed me up as he always has! So now the Tattoo Chopper has a new custom-made exhaust, new custom handlebars, new open primary and the coolest springer front end on the planet! OK, then we added some new Avon tires, some new wiring, replaced some hoses and cables… and installed a new starter. Good to go!

“When I look at some of the bikes we built several years ago, I will redesign them in my head without even intending to.”

I know what you’re thinking, I spent good money needlessly on something that was cool before I started! But I look at it this way, I DID NOT build a new bike for Sturgis this year. I just “redesigned” an existing bike, so I saved a ton of money. Or at least that’s the way I will pitch it to my wife if it ever comes up! By the way Ma, the Tattoo Chopper came out AWESOME and I absolutely LOVE the way it looks and rides! Hopefully, this redesign will last me the rest of my life… wait, what?

That’s about it from here Ma – just a lot of crazy busy stuff happening. Sometimes I get overloaded and little things drive me crazy, but it’s always been that way and it’s too late to change now. I gotta go for now Ma, we are hosting a big retirement party next door at Strokers IceHouse for a Southwest Airlines employee and the place is packed! I figure I better mosey on over there just to make sure everybody is having a good time!

Advertisement
In this article:Can ya dig it?, Choppers, Strokers Dallas