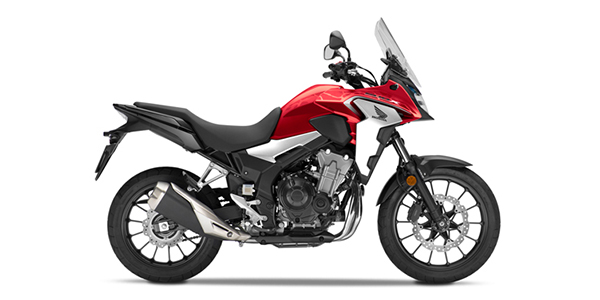 Honda announced that its adventure line welcomes significant improvements to the CB500X for the 2019 model year.

Honda announced that its adventure line welcomes significant improvements to the CB500X for the 2019 model year. The midsized, parallel-twin-cylinder machine remains one of the most maneuverable, rider-friendly, easy-to-own motorcycles on the road, and now performance updates encourage a greater sense of adventure.

With a 19 in. front wheel, more aggressive tire treads, increased front and rear suspension travel and updated styling with a more upright riding position, the CB500X is truly adventure-ready, and improvements to the engine’s intake tract, valve timing and exhaust result in increased torque and crisper throttle response.

“While the CB500X has been popular in stock form, some more adventurous riders have turned to the aftermarket to suit their needs in recent years,” said Lee Edmunds, American Honda’s senior manager of powersports marketing. “For 2019, Honda engineers have followed our customers’ lead and made a number of revisions to the chassis and engine, moving the CB500X alongside Honda’s full-size and entry ADV models as a truly adventure-ready motorcycle.”

In addition, Honda announced the return of other adventure models for the 2019 model year, including the NC750X and CRF250L Rally, as well as the CRF250L dual-sport bike.

Pricing and availability will be released at a later date.