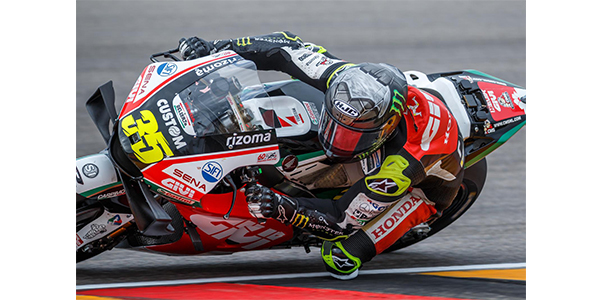 With more than one million new bike registrations of 50cc and larger throughout Europe, the market is vital to helmet manufacturers such as HJC.

After attending the HJC MotoGP of France in LeMans last year, HJC America president George Hong told us to keep our calendar open for the German Grand Prix in July 2019. While it was too soon to announce at the time, HJC had their eyes focused on the German round of MotoGP for several reasons. And when the race became available to sponsor, HJC jumped on it.

HJC Europe, based in Strasbourg, sits on the border of France and Germany, so it was only natural that a German GP was in the future for the self-proclaimed “No. 1 Helmet Company in the World.” Germany is home to some magnificent stretches of highway — the autobahn, with unlimited speeds — where powerhouse automakers such as Mercedes, Porsche and BMW roam freely along with many bikes. But only BMW makes both cars and bikes for the world’s seventh largest economy and fifth largest consumer market.

Germany is similar to the U.S. in that they sell a large percentage of big displacement bikes (mainly sport touring and ADV bikes) and the necessary gear to ride them. Germany registered the most new bike registrations in Europe in 2018 and is on track to see similar growth again this year. This makes it one of the strongest for accessory sales in all of Europe.

In 2018, Germany sold more 1,000cc and bigger bikes than any other displacement range. Larger bikes mean more accessories and premium level safety wear, which is where HJC fits into the picture. Since the Korean helmet company began selling the RPHA series line in 2012, it has seen great success in Germany as well as in the U.S. with its premium-level lids.

With more than one million new bike registrations of 50cc and larger throughout Europe, the market is vital to helmet manufacturers such as HJC. Unlike the U.S., all riders are required to wear helmets. Germany had the most significant sales increase in the EU for new bike sales last year with 11% growth. Couple that with the larger displacement bikes that German riders prefer, and it is one of the most important countries (outside of the U.S.) for HJC helmet sales.

HJC’s global footprint stretches to every corner of the world, and it was on full display at their annual dealer meeting in Dresden. We met dealers and distributors from every continent including a new distributor from Brazil and the only distributor in New Zealand who made the 30-hour flight with one of his top dealers.

While the HJC German Grand Prix may take place in Germany, it is a focal point for their global dealer network of nearly 8,000 distributors worldwide. The race is a backdrop to celebrate the past year’s success — with U.S. distributors Sullivans and Helmet House sending their top sales representatives as a bonus for their hard work.

As a guest of HJC, we got to relax in the MotoGP VIP Village to watch the races with the other guests. We ate German cuisine and sipped Chinese beer (Singha, which sponsors MotoGP), as HJC sponsored riders would pop in to take photos and sign autographs.

The dinner, after qualifying on Saturday night, was a chance to commemorate all of the exceptional dealers, for which there were around 200, and 60 from Germany alone. It’s also a chance to look ahead to new opportunities and new products coming down the pike. We saw some new helmet designs that we can’t talk about right now, but they will be unveiled in the coming months, so stay tuned to MPN’s coverage. Cal Crutchlow is the newest HJC rider and he was chosen to wear their new Batman RPHA 01R helmet. This year, all MotoGP helmets had to meet tighter standards set by the FIM, so the RPHA 01R is a MotoGP spec helmet, which is similar to the RPHA 11, but only available for their GP riders.

One of the highlights of the weekend was getting to meet Crutchlow and all four Moto 2 riders. On Sunday, HJC scored a hat-trick with a podium in all three races. Unfortunately, we missed our chance to get on the grid for the first-ever Moto-E race, but we’re sticking by the excuse that we couldn’t hear them.

While we loved HJC MotoGP LeMans and all of the history of that track, most of the guests we spoke to prefer the setup of Sachsenring. We could see most of the track, and we were able to overlook pit lane and all the action that went on between races. Speaking with the managing director of HJC Germany, Peter Kaiser, he said that not only was the race a success in terms of guest entertainment value, but also the race was the most attended event of the calendar so far with more than 211,000 spectators and more than double the viewership on German television. HJC will be the title sponsor of the Sachsenring round in 2020, so we’re planning to save our Euros in hopes of another visit.

On a side note, George Hong and the rest of HJC’s management team put together a very heartwarming 80th birthday celebration for company founder W.K. Hong. There were several video tributes from riders, including Andrea Iannone, Ben Spies, Cal Crutchlow and others. Then W.K.’s grandson sang “happy birthday” over a cake shaped fittingly like a helmet.

As HJC continues to grow and bring in new dealers and distributors throughout the world, it is still very much a family company and atmosphere. Something we’ve always heard about the industry that rings true in this case is that it’s a people business. People sell to people, and HJC has undoubtedly put their people front and center.