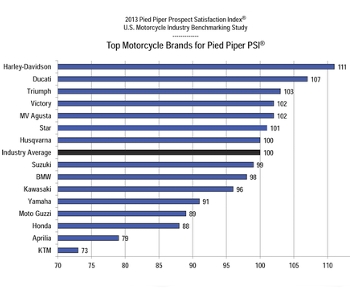 Harley-Davidson dealerships led all brands in 18 different sales activities, such as encouraging shoppers to sit on a motorcycle, asking for contact information and helping the shopper overcome obstacles to the purchase. 11 different brands led at least one sales process category, and brand performance varied considerably from brand to brand. For example, Ducati salespeople offered a brochure to approximately nine shoppers out of 10, while less than half of Suzuki, Honda or Kawasaki salespeople offered a brochure. BMW, Triumph and Harley-Davidson salespeople were more than twice as likely to offer a demo ride as the salespeople at Ducati, Suzuki, Honda and Yamaha dealerships. Victory salespeople were most likely to suggest arranging a demo ride in the future.

Industry average dealership performance was mixed when comparing 2013 with the previous year.

Salesperson behaviors more likely in 2013 than 2012 include the following:

Salesperson behaviors less likely in 2013 than 2012 include the following:

2013 Pied Piper PSI Internet Lead Effectiveness (ILE) U.S. Motorcycle Study
Much has changed over the five years since 2008, when Pied Piper last measured how effectively U.S. motorcycle dealerships handled customer inquiries received over the Internet. Back then, Pied Piper found that motorcycle dealerships responded within 24 hours – in any way – only 30 percent of the time. The comparable number in 2008 for the auto industry was 64 percent of the time, and auto-response CRM software in 2008 was uncommon.

The 2013 Pied Piper PSI-ILE U.S. Motorcycle Study was conducted between September 2012 and April 2013 by submitting internet inquiries to a sample of 1,117 dealerships nationwide representing all major brands.