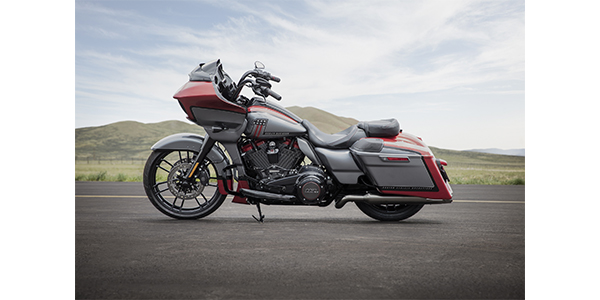 For the rider who expects it all – luxury, performance, features and style, the CVO Limited model offers the ultimate in long-range touring comfort and luxury.

The 2019 CVO Road Glide has a distinctive, menacing style combined with long-haul comfort in a performance-touring motorcycle ready for long roads and late nights. The Road Glide features a new Blaze Red band on engine rocker boxes; new Fang front spoiler and lower bodywork; Screamin’ Eagle Heavy Breather intake for bold hot-rod style; and the exclusive Knockout 21-in. front and 18-in. rear wheel (the only factory-installed 21-in. front wheel offered on a Harley-Davidson Touring model). The suspension is engineered to work with the wheel size to deliver optimal performance, handling, and ride quality without compromising fitment of accessories.

Each 2019 CVO model is offered in three distinctly different styling treatments, from a look with a bright powertrain and chrome details with two-tone paint, to a combination of dark and bright finishes, to a very dark look with a monochrome or fade paint.

The new Boom! Box GTS infotainment system is standard on each 2019 CVO model. Wireless headset with Bluetooth interface to the Boom! Box GTS eliminates cords and enables the same functions as wired headset with premium sound quality. The headset has a range of up to one mile and can communicate with up to eight other compatible headsets. The CVO Limited model is delivered with two wireless headsets; the CVO Street Glide and CVO Road Glide models include a single headset.

The Tire Pressure Monitoring System displays current front and rear tire pressure on the Boom! Box screen and issues an alert when tire pressure is low to warn the rider that tire pressure should be checked, or if a tire is losing pressure due to puncture.

The Milwaukee-Eight 117 is exclusive to CVO models and features 117 cubic inch displacement, a high-performance camshaft and intake, an elevated 10.2:1 compression ratio and produces up to 125 ft.-lbs. of torque. On 2019 models, the Milwaukee-Eight 117 for CVO is identified by a bright Blaze Red band on the engine rocker boxes.

CVO Limited: Four Boom! Stage I speakers (paired in fairing and Tour-Pak carrier) powered by a single amplifier and 75 watts per channel.