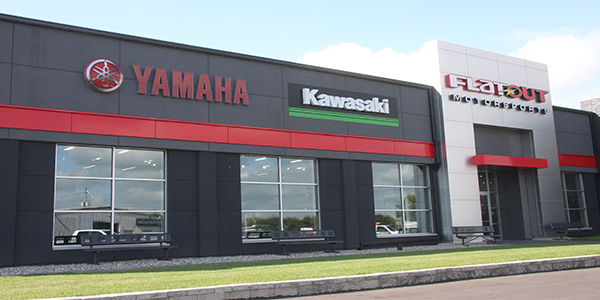 Conventional wisdom in retail today warns of difficult times and constant challenges. Experts predict even more dire consequences for product-specific brick and mortar outlets such as, say, motorcycle shops. But none of that has any impact at FlatOut Motorsports in Indianapolis. As the business name suggests, FlatOut is unflinchingly on the gas without even a glance in the rear view.

And though FlatOut’s owner William Starkey started with a passion for the subject matter, his straightforward attitude toward adapting to change has likely been the greater contributor to his business longevity. “I don’t have a problem closing and opening stores,” he said.

This megastore, visible from I-69 in metro Indy, is the seventh retail location he’s opened since 1997, all built from the ground up except the company’s other store in Martinsville, an hour away from the new one, which Starkey acquired in 2007.

An Indianapolis native. Starkey’s dad put him on a Honda 50 as a youngster, leading William to race motocross and pursue a job at Dreyer Honda at the tender age of 13. He raced and worked through high school until joining the military. Then in 1996, at 22, he started his own small shop selling used motorcycle parts, and became a franchised Ducati dealer under the FlatOut name in May 1997. Resisting stagnation, Starkey continued to grow and move, opening several other locations, including a single-line Yamaha shop. As the market evolved, buying habits changed and demographics altered he also added OEM brands – and nixed them – accepting change and embracing transition. 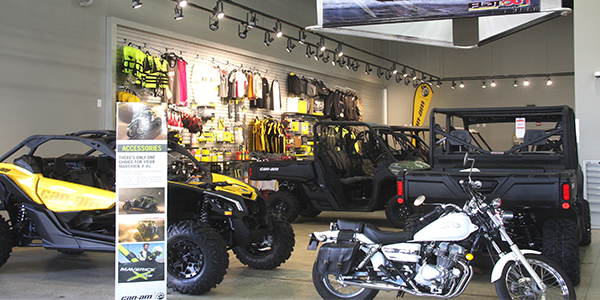 The new 78,000 square foot megastore, which opened in June, is an anomaly in these times but one step inside the door gives the impression that it’s a place where any motorsports dream can be fulfilled And that’s the point. “The goal is to be the total destination store in the Midwest, the place people ride to from three or four hours away just to see,” said Starkey.

The former GM hybrid bus facility was completely renovated and phase two is still in progress, with grand opening set for later this year. A gear and accessories “store within a store” is to come. “Years ago I would not have tackled something of this size but in 2011 I decided to take all my chips and throw in. If you’re gonna do that you better have a royal flush!”

But the wow factor alone doesn’t overcome retail’s challenges. As the owner of an e-commerce company as well, Starkey sees both sides. “There’s currently a place for internet and a place for brick and mortar. He describes internet business like a retail version of distribution and says the skills are different. “I’m being very careful not to compete with the Internet.” 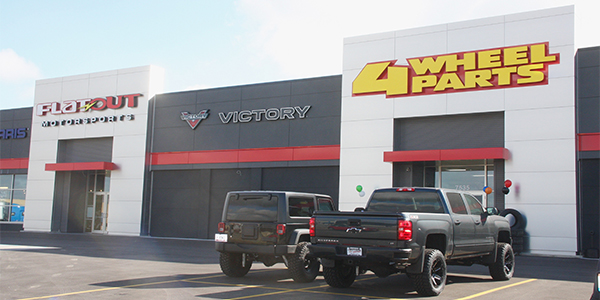 He also believes the powersports industry will ultimately imitate the auto industry in that dealerships will sell vehicles and repair them, and the Napas and Auto Zones of the two-wheeled world will handle parts, gear and accessories – on the internet. In fact, he said, it’s already happening.

But there are brick and mortar items – helmets, boots, leather – that are protected from internet influence by the suppliers and he’s careful to purchase those types of products. There’s business model for some product lines, things people want to see first hand and will drive to the store to purchase,” Starkey said. 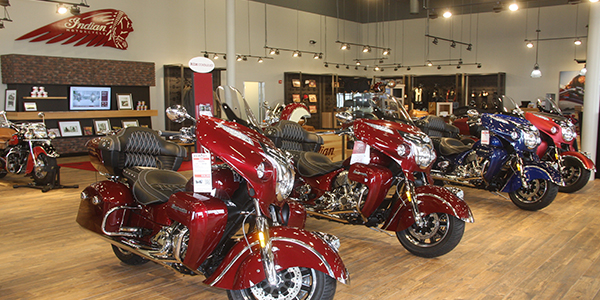 And that includes motorcycles. “Polaris and Harley-Davidson don’t want their vehicles sold on the internet and come down hard if they see it done. Manufacturers want people to come to the stores, to get the experience. As the big companies continue these business practices, others will follow. They already are.”

And here’s where savvy thinking and a cold eye toward reality enter the equation. “Twenty years ago you wanted to be a Honda dealer but the model has flipped. These days you want to be Harley, Indian, Can-Am, Sea-Doo. Domestic brands are the tickets to success.”

“It’s the right product, at the right time, with the right company and vision behind it.” 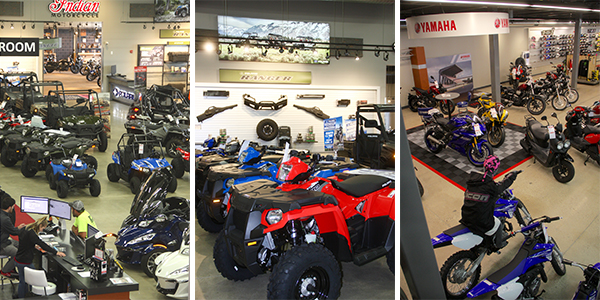 Also recently on board is Sea-Doo watercraft, currently the store’s top selling brand and that’s no accident; the store’s location is in proximity to two popular lakes. Similarly, Starkey does not carry snowmobiles because there are no trails regionally.

But ATVs and UTVs remain solidly in the picture and FlatOut carries a full line-up from Polaris. ATVs continue to be popular for hunting, utility and even racing. The current trend is toward bigger, more powerful UTVs with options such as winches, snowplows, roofs, full cab enclosures, even air conditioning. And price tags are going up accordingly.

Added Starkey, “The potential is so huge in this store, not only the location and the size of it but the capability of the brands we have and the team here. We’ve got all the pieces to be truly successful even in a tough market.”

Those elements, yes, plus a vigilance against complacency mixed with a fearless view of reality.

From the Magazine: OEM Update: Indian On a Roll