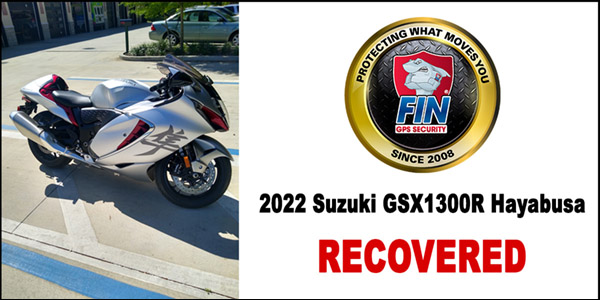 The owner of Suzuki sportbike received a motion alert from his FIN security device in the early hours of the morning, indicating that his motorcycle was being moved. He immediately called the FIN GPS Security theft hotline. The FIN theft recovery team started monitoring the Suzuki while the customer contacted local authorities.

The FIN theft recovery team and customer were able to continuously monitor real time updates on vehicle battery, speed, heading and location data. This valuable information was given to the local police, with the last location being a residence in Miami. Once the police arrived, they recovered the motorcycle without further incident. An arrest was made, and there is still an ongoing investigation.