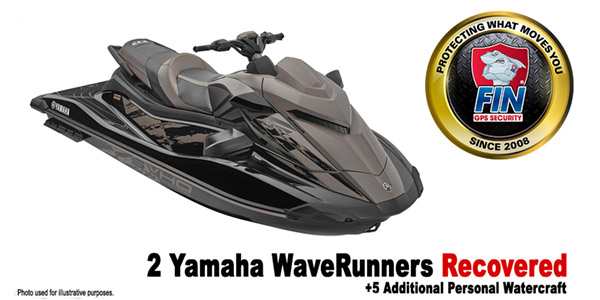 The owner of the two WaveRunners stored them at a remote location. Upon receiving text notifications from FIN that both had moved, he immediately called the FIN GPS Security theft hotline. The FIN theft recovery team monitored the stolen Yamahas while the customer contacted local authorities.

While FIN tracked every move, data showed that the batteries were disconnected on each watercraft. It is common for thieves to disconnect the vehicle battery at an attempt to disable any potential security features. With its built-in backup battery, the FIN device continued sending vital speed, heading and location data. This valuable information was given to the local police, with the last location being a warehouse. Once the police arrived, they not only recovered the two WaveRunners but also five other PWC as well.