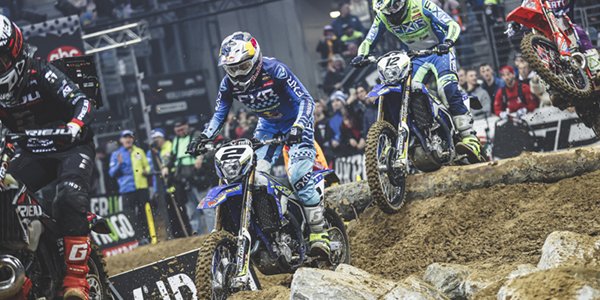 The 2022-2023 FIM SuperEnduro season kicked off this past weekend at the Tauraon Arena in Krakow, Poland. FactoryONE Sherco riders Cody Webb and Cooper Abbott had great starts to their campaign with P3 and P5 finishes respectfully.

Scoring for the FIM SuperEnduro is different from that of the AMA EnduroCross series. It is not Olympic scoring that we are used to in the U.S. The riders in EnduroCross are also not awarded points for their hot lap qualifier. With SuperEnduro, you are awarded points from the SuperPole qualifying to each of your moto finishes. With that, Webb got off to a not-so-ideal start when he stalled his bike in SuperPole qualifying, putting him in P7, the final position on row one. Abbott would finish one spot behind him with the eighth gate pick, which in SuperEnduro, is on the second row.

The Polish track was much different from what the FactoryONE riders were used to. The soft, wet and sandy soil turned into a rutted mess by the second moto. It also seemed to lack the technical flair that the pair had seen during the recent EnduroCross season. With that, it did seem to task the riders, sucking the energy out of them.

Moto 1 saw Webb and Abbott P2 and P3 just behind Jonny Walker after the first set of obstacles at the gate drop. Webb was battling for the lead early, but he ended up finishing the 10-lap moto in P3 after Billy Bolt made his way to the front. This would set him nicely up for a podium push. Cooper Abbott’s maiden SuperEnduro moto saw him P6 behind the British pairing of Billy Bolt and Jonny Walker, teammate Webb, hometown hero Taddy Blazusiak and Spaniard Alfredo Gomez.

The reverse grid second moto somehow still had Webb and Abbott starting from the front row after gate selections. The pair were out front in the early stages of the Moto, where Abbott was P3 at the first time check, with Webb just behind in P4. The track was really deteriorating at this time, demanding the most out of all of the riders. The pair gave it their all and they both rode solid races, finishing P4 for Webb and P5 for Abbott.

Webb now had a chance to make the overall podium if he was able to have a solid moto in the Prestige class finale. He and Blazusiak were neck-and-neck in total points, so Webb knew he had to finish ahead of his Polish adversary. As the gate dropped, it was Webb in P3 after the first finish line checkpoint with Blazusiak back in the pack after an early stumble. Webb rode a mistake-free in the final moto, crossing the finish line one spot ahead of Blazusiak. This result would be good enough for the final podium spot with moto finishes of 3-4-3. Cooper Abbott finished Moto 3 in P6, giving him 6-5-6 moto scores, which were good enough for P5 on the night.

“I am so stoked to be back on the podium after the awful 2022 SuperEnduro season,” exclaimed Webb. “I felt like we were able to capitalize on the momentum from the EnduroCross season back home. My mechanic, Cody Richelderfer, has the SEF 300 dialed. We made some adjustments going into the 2022 EX season and they have paid off. This field is so stacked, so I am really pleased with how my night went. The track was a bit sketchy, but we managed it well.”

“I am so pumped to have top-five finish in my first SuperEnduro race,” said Abbott. “I am so thankful to the FactoryONE Sherco team for allowing me to have this opportunity. It has been such a unique experience these last 10 days here in Europe. The crowd was amazing tonight and that really had me going. I knew it was going to be a tough race in some tough conditions. I have never raced on dirt like that. The ruts were up to pegs in some cases. I rode consistently tonight and was happy to have two American teammates in the top five.”