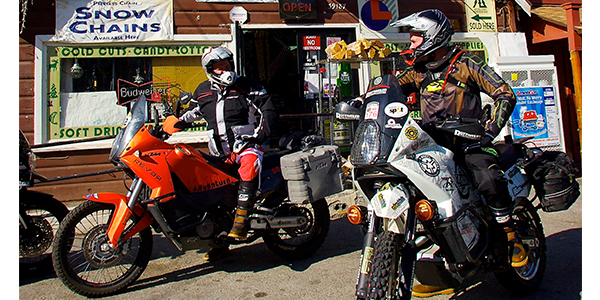 Seems like once every decade, Americans get the bug for big adventure bikes. But with the seeming exception of clannish KLR650 riders and BMW GS Gelände/Straße (German for off-road/road) riders, the dual-sport sector remained a slight blip on the MIC Retail Sales Report radar… Until now!

What’s old is new again – at least in the case of the burgeoning ADV/Touring niche. Dealers of a certain age may remember Ted Simon’s book Jupiter’s Travels chronicling his four year/126,000 kilometer ride across 45 countries on an old Triumph Tiger circa 1973-’77, or Helge Pederson spending 10 Years On 2 Wheels between 1982-1992.

More recently, maybe it was a grainy VCR tape of a diminutive Danny LaPorte wrestling a massive Cagiva Elefant to second place in the 1992 Paris-Dakar Rally… seems like once every decade, Americans get the bug for big adventure bikes. But with the seeming exception of clannish KLR650 riders and BMW GS Gelände/Straße (German for off-road/road) riders, the dual-sport sector remained a slight blip on the MIC Retail Sales Report radar… Until now!

In recent years, the big dual-sport segment has captured the attention of virtually every OEM. Honda just released its much anticipated Africa Twin, Triumph has the Tiger Explorer, KTM 1290 Super Adventure, BMW R 1200 Adventure, evergreen KLR650, V-Strom XT, Ducati Multistrada 1200, even Royal Enfield has the Himalayan on the horizon for a U.S. launch later this year as a 2018 model. 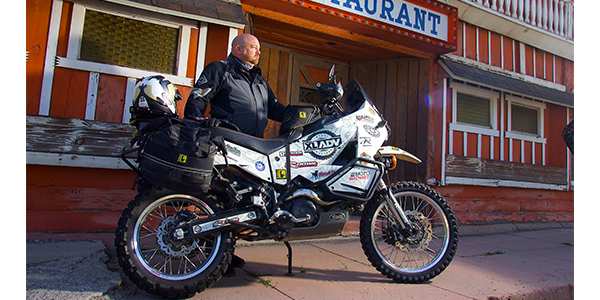 ADV customers will spend the money, say our experts, but the salesmen will have to earn it. Have someone knowledgeable about them on staff. (Joe Bonnello)

All these bikes are capable of taking on the Alcan Highway north to the Arctic Circle and riding to the tip of Tierra del Fuego, or at least they look the part! The aftermarket has been scrambling to catch up with European competitors. One trip to the INTERMOT show in Cologne or the EICMA event in Milan reveals countless manufacturers with nothing but ADV related products.

We still have visions of GIVI top boxes, Hepco & Becker panniers, Touratech crash bars, skidplates, GPS mounts and hundreds of other ADV specialty items that we never even knew existed, but immediately had to have after our last trips to European trade shows.

KTM quickly followed suit with the 1190 Adventure and Triumph went big(ger) with the Explorer. Cook notes the goal was simple: “Each manufacturer recognized that ADV machines were getting heavier and more powerful, which taxed the abilities of the relatively narrow tires previously deployed.” With ADV bikes like the Multistrada having 160 hp on tap, tiny tires are not an option!

“The first question we get asked is ‘How many miles will I get with these tires?’” says Motoz tire importer Brian Cornelius of Pacific Powersports, Inc. Interestingly, price is the last question. “It is tough to answer because of the bike, rider and terrain are always different. However, with this tire we are typically getting twice the longevity than most other dirt-oriented ADV tires. When I say dirt-oriented, the Tractionator Adventure tire is approximately 70% dirt, 30% street.” 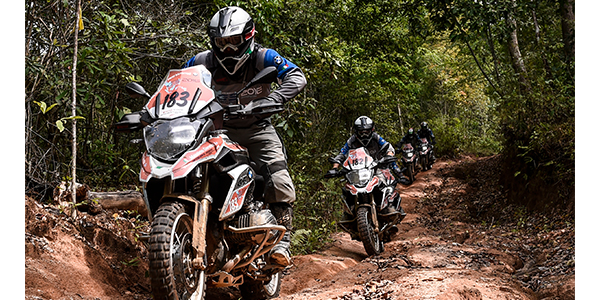 The typical ADV rider has more discretionary income than most other market niches. They are buying $15k or more motorcycles, spending $1000+ on riding gear, plus all the extras. (Photo courtesy of BMW Motorrad)

This ADV action translates into opportunity for all dealers. “It is absolutely a viable profit center for a mainstream dealer,” claims Cornelius. “The typical ADV rider has more discretionary income than most other market niches. They are buying $15,000 or more motorcycles, spending $1000+ on riding gear, plus all the extras!” He should know, Cornelius was an early convert to the ADV market and currently rides a KTM 1190R.

FirstGear Brand Manager Jeffrey Boaz agrees that opportunities are there for dealers. “It’s great to see these bikes finally move to the popular side of the marketplace, and with it the additional revenue opportunities.” But dealers can’t just dabble in the highly specialized niche. “The ADV rider tends to be very tech savvy and does research on just about every piece they add to the bike or wear. In some cases it’s that one big annual trip they are planning, others are daily riders… but both types know what they want!”

“Dealers need to stock specific product for the ADV market… and have someone who is knowledgeable about this market,” adds Cornelius. One of MPN’s staff ADV riders, Eric Anderson, agrees: “They days of hang and hope are gone.” He confesses customers like him will spend the money, but the salesman is going to have to earn it!

Anderson is an early ADV adapter – after a stint in the Peace Corps, he rode his Yamaha TT500 from Africa to Amsterdam caught a ship to Canada and rode to Southern California from there. He was also the original FirstGear sales manager back in the day. 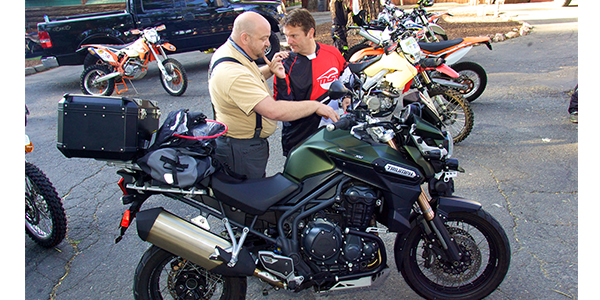 As a brand that has stuck with the ADV/Touring niche from the beginning, FirstGear has plenty of insight on what these customers want. “They want products that offer quality and value, not just some high tech material names thrown around to justify extra costs,” explains Boaz, who was another early fan of big dual-sports. “I started on Cagiva Elefants back in the ‘80s, so its great seeing all the amazing machines out there now.” Today a Triumph Tiger Explorer is his ADV beast of burden.

“FirstGear being an American brand, we tend to fit well for American shapes, we also offer short and tall sizing on many of our products. We also offer gear engineered for women – are not going to ‘shrink and pink’ a men’s jacket then call it a women’s piece. We offer the same features as the men’s and make adjustments to allow for flexibility in fit for many varied shapes and sizes women tend to be, more so than men… For dealers to stock it it’s a great opportunity with so many brands to choose from and being sourced from all over, fit is getting to be like a helmet. You don’t know until you try it on.”

Trending now? “For clothing we are seeing the lightweight shells and layering systems gain more momentum, coupled with an increase in the heated mid-layers,” says Boaz. “In the luggage arena, our ‘Drybags’ inspired by the river rafting crowd offer flexibility in size+ and are easy to stow when empty without sacrificing waterproof capability.”

While everyone agrees the ADV sector is just now hitting the powerband, aftermarket exhaust systems are not keeping pace with the relative explosion of unit sales. “It is a very different market for us,” says Yoshimura Communications Manager Erick Bartoldus. “Unlike a motocrosser or sportbike guy who replaces an entire exhaust system before the bike leaves the dealership, pipes seem to be the very last item these customers add. And when they do put on a pipe, it is usually just a slip-on replacement rather than the entire system.”

Although aftermarket may be an afterthought on the exhaust side, that hasn’t stopped Yoshimura from having developed top-of-the-line pipes for everything from the BMW R1200 GS to the Yamaha Super Tenere. “We even have exhaust engineered for Honda’s brand new Africa Twin,” says Big E. 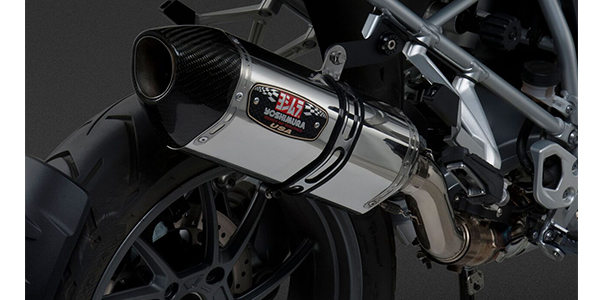 ADV customers typically research their products on the internet and spend heavily on gear, but parts and accessories are often an afterthought. Yoshimura offers a full line for many of the premium ADV models and is hoping to change this trend. (Photo: Yoshimura)

Fad or fact? “We are just clicking into first gear… I see ADV as fact over fad as it crosses the line of touring, sport touring and offers a bit more versatility on a long ride,” believes Boaz.

“A rider may come to a dirt road on a trip that they would never consider exploring on a Gold Wing or FJR and the ability to explore a bit deeper is very alluring. Pounding out 40 miles on a whooped out gravel road which is going to feel more comfortable: Road King or GSA? The great thing about our line is that it allows the rider to choose without being so dedicated that it can be stocked and sold to either rider.”

The ADV/Touring guy really is the most “Walter Mitty” rider of all the segments out there. “The ADV crowd crosses into overlanding and its focus is about exploration and escape of the crowds,” notes Boaz. “Dealers have an opportunity to build displays that speak to that crowd – focus the product in places not normally seen when headed down an Interstate highway. I know several shops build in store displays of a ‘moto’ campsite using nothing but products that they sell.”

Bottom line for dealers looking to explore the ADV/Touring market: Having the products in stock and then having the staff trained to match the expectation of the customer is key, as always. Work with your vendors and local ADV groups to do some seminars or campouts. You might find that the opportunity to be in a non-sales atmosphere gains you credibility when the time comes for purchases, and make sure you have a good time!