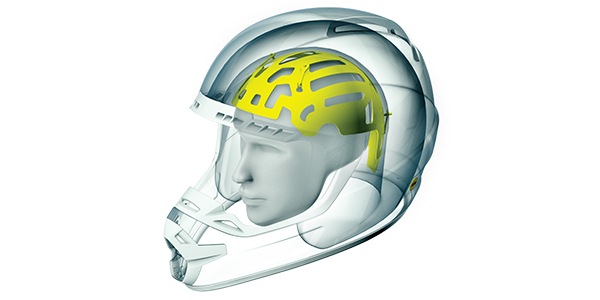 Today, there are two styles of full-face helmets. Most traditional models have an integrated chin guard, however, with modular or “flip-up” helmets, the chin guard may flip up and out of the way for the rider’s convenience. 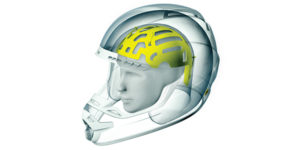 In the 1950s and ‘60s, open face helmets were the norm for motorcycle riders and racers. They had evolved from a hardened leather shell to fiberglass shells with cork liners, but they left a lot of the head unprotected… namely, the face and the jaw were left dangling out in the open.

In 1963, Bell Helmets made the first full-face design and began marketing them to motorcyclists and racers for $59.50, which was a lot of money for a lid back then. It was the first helmet to have chin protection and a shield to cover the whole head and from then on, full-facehelmets were the most protection a rider or racer could have.

Today, there are two styles of full-face helmets. Most traditional models have an integrated chin guard, however, with modular or “flip-up” helmets, the chin guard may flip up and out of the way for the rider’s convenience. According to Snell, modular helmets must meet all the same requirements as those equipped with integral chin bars with the additional requirement that the chin guard release mechanism must be sufficiently secure to prevent inadvertent opening in a crash impact.

Helmets that have a sticker from DOT, Snell or ECE have to pass crash tests to receive certification, but not all tests are the same. We don’t have enough space to go into all of the various testing procedures, however the tests today are more stringent and scientific than the early crash simulations and some of the standards still apply.

The Snell Foundation has identified the top criteria for helmet safety as: Impact management – how well the helmet protects against collisions with large objects; Helmet positional stability – whether the helmet will be in place, on the head when it’s needed; Retention system strength – whether the chin straps are sufficiently strong enough to hold the helmet throughout a head impact; Extent of protection – the area of the head protected by the helmet.

Snell notes that the second item – helmet stability – presumes that the helmet is properly fitted to the wearer’s head. MIC’s Gear Up University has a website dedicated to teaching dealers about helmet safety and fitment (www.gearupeveryride.com). Fitment is one of the most overlooked aspects and the easiest to correct. A good helmet won’t work if it comes off in a crash. Dealers need to make sure their entire staff knows how to properly fit a helmet. Put signs in the break room and make sales staff take a test and practice on other employees.

The Snell Foundation recommends a simple, straightforward procedure for proper fitment: Position the helmet on your head so that it sits low on your forehead; if you can’t see the edge of the brim at the extreme upper range of your vision, the helmet is probably out of place. Adjust the retention system so that when in use, it will hold the helmet firmly in place. This positioning and adjusting should be repeated to obtain the very best result possible. The procedure initially may be time-consuming. Take the time. Try to remove the helmet without undoing the retention system closures. If the helmet comes off or shifts over your eyes, readjust and try again. If no adjustment seems to work, this helmet is not for you; try another.

In 1996, Dr. Hans von Holst and Dr. Peter Halldin together came up with the idea of the MIPS (Multi-Directional Impact Protection System) technology, mimicking the brain’s own protection system. The first prototype of a MIPS-equipped helmet was tested at the University of Birmingham in 2000, and resulted in the first scientific publication in 2001, showing that MIPS significantly could reduce the rotational acceleration.

While Dr. von Holst was at the Karolinska Institute in Stockholm, he began to explore how helmets were constructed. He contacted the Royal Institute of Technology (KTH) in Stockholm to do biomechanical research on head and neck injury prevention. As a result, student Peter Halldin initiated his PhD on head and neck injury biomechanics, being the first PhD within this field. Halldin initiated the work from a technical perspective, with assistance from von Holst and his clinical background, with the goal of understanding the complete picture from accident to potential injury.

During the research, they analyzed the need for a system that reduced the rotational acceleration to the brain, which became the basis for MIPS. Initially, the MIPS layer was found between the helmet’s shell and the EPS/foam helmet filling. More recent and common versions have the MIPS layer underneath the EPS, between the helmet and the head. This is the most common low friction layer on the market today.

More and more helmet manufacturers are working with MIPS to integrate this system into their helmet lines. Bell was one of the first to introduce MIPS in its MX helmets, and now there are several others. The company says it is not trying to keep the technology to itself and is seeking partners.

Helmet technology is evolving after 50 years of thinking in one direction. While Snell still has some of the toughest standards for safety, and ECE is similar in their testing, none of them are testing for rotational acceleration. This may soon change as our understanding of the brain and concussions is growing. But there are still far too many riders who don’t wear the proper protection, and that is where we as an industry need to promote wearing the right gear. Be sure to check out Gear Up University and get the conversation started with your customers.