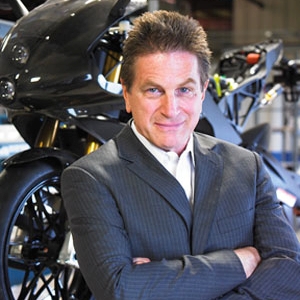 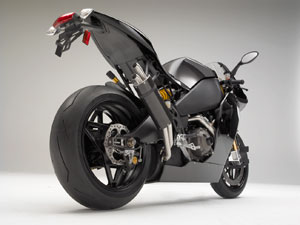 Erik Buell’s passion for two-wheeled perfection led him to take a new road after the unforeseen crash of the original Buell motorcycle brand. Erik is back with a new company and a new will to win free from corporate limitations.

A mechanical engineer by training and a top-level road racer by avocation, Buell began designing race bikes in 1973. A job with The Motor Company enabled him to pursue both his professional development and his racing career for four years before he started his own Buell Motorcycles operation in 1983. Eventually he sold the Buell business to Harley and ultimately 135,000-plus sportbikes were produced in the 15 years before Harley turned the tap off on that division.

Like any good racer, Erik has bounced right back up determined to win. This genesis led to the creation of Erik Buell Racing (EBR) and its goal to be the true American sportbike company.

A manifesto on the company website neatly sums up the EBR mission: “We think like racers, making decisive, aggressive and calculated decisions. But we also think like passionate riders. We make bikes that we want to ride. Most of all, we feed off Erik and his fire-in-the-gut passion to build fast, magnificently engineered motorcycles.” Not a bad starting point, but EBR also offers more tangible benefits to potential dealers.

Starting with the dealer in mind, EBR offers some of the highest margins in the industry, bar none. “We want the dealer to benefit from stocking the line, so we built in a margin that is greater than the European bikes,” explains EBR vice president of sales and marketing Jim Dorman. “We believe the dealers deserve to earn an honest profit while selling a premium product.”

Winning on the track is only half the battle and means nothing without winning dealers. “We have proof of concept winning at the track. We have the engineering expertise and production capacity as well as the back-end resources to be taken seriously as an OEM,” adds Dorman. “What we need now is a viable dealer network.”

In a total paradigm shift, EBR intends to build this network from the dealer-level up, rather than the traditional OEM route of dictating terms down to its dealers. After an intentionally controlled launch, EBR is ready to bump the rev limiter, particularly when it comes to accelerating the development of its dealer network. Successful production and sell-through of the initial 1190RS flagship bikes, not to mention running at the front of the AMA Superbike pack this season, has EBR ready to “win on Sunday, sell on Monday,” according to Dorman.

“We have had great press, including Erik being named Motorcyclist Magazine’s ‘Motorcyclist Of The Year’ and Cycle World naming the 1190RS ‘Superbike Of The Year’ in its annual 10 Best awards in 2011, and our on-track success in 2012 has been exceptional as well with EBR team riders Geoff May and Danny Eslick putting the bikes in contention at every AMA Superbike race this season.” Perfect brand positioning for a “superbike with lights” machine.

This is just the beginning. EBR is launching three new platforms in 2013 — an R version, a Street Fighter and an Adventure series. These three new models will be based upon the EBR-designed and developed 1190cc liquid-cooled twin and will be priced under $19,000. “We are committed to developing a wide variety of platforms in the coming years,” explains Dorman. “EBR is truly committed to our dealer network … Our goal is to help the dealer succeed financially first.”

Part of this financial success stems from the fact that the total expense for special tools comes in under $500. Better yet, franchised dealers don’t have to stock a million dollars worth of spares. “There really is no need for a huge parts inventory,” Dorman points out. “Many of our components are made in America, stocked in our factory and ship next-day to our dealers … all of which means no need to have a lot of money tied up in parts inventory.” And again, given Erik Buell’s racing background, a wide array of dealer-installed performance upgrades are already available, further enhancing the margin for franchise holders.
“Doing business with EBR is different than what dealers have experienced with OEMs in the past,” says Dorman. “Having the factory based here in East Troy, Wis., means we will ship units on a monthly basis without having to overwhelm a dealer with a one-time annual order.”

It also means motorcycles are shipped with the wheels mounted and the bars in place for minimal dealer set-up/PDI time.

Also, unlike some other OEMs, any special tech training is handled via web-based training modules, so there is no need for downtime in a dealer’s service department. Any warranty work that should come through will be paid at your published shop rate. The only requirement that EBR does have is that dealers stock a minimum of three bikes, as well as having a demo unit on hand.

Further establishing EBR as a serious threat on the showroom floor is the “Store-In-A-Store” concept. A freestanding display featuring three bikes, EBR Racewear/casual apparel and an array of branded accessories combine to give this program some real punch. Protected dealer territories, collateral marketing materials from EBR and other value-added elements have been built into the dealer agreement.

“We know that you have made large investments in your existing dealership, so we want you to get excited when you hear how our Erik Buell Racing Valued Dealer program works,” adds Dorman. “We’re looking for dealer partners who understand the value of offering riders the chance to own one of the most exciting sportbikes to ever come out of this country.

“We have many game-changing opportunities incorporated into EBR,” concludes Dorman. But like the U.S. Marine Corps, EBR is only looking for a few good dealers. Do you have what it takes?