Despite the fact that the domestic market has been down in recent years, particularly on the scooter side, EICMA itself is truly on a roll as attendance was up nearly 10 percent for 2013. With more than half a million consumers and virtually every motorcycle media outlet in the world on hand for the five-day show, there really is no denying EICMA is the “capo di tutti capi” of motorcycle events. 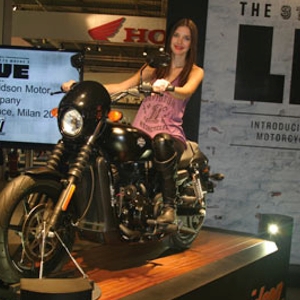 During the time of Caesar, they said, “All roads lead to Rome.” For the modern motorcyclist, all roads lead to Milan for the annual EICMA show. Officially known as the Esposizione Internazionale Ciclo, Motociclo & Accessori, the event in Italy has grown to become the world’s largest motorcycle show. By “big show,” we mean literally and figuratively, since EICMA encompasses more than 3 million square feet. Simply put, if you are serious about being in the motorcycle market, you have to be at the Milan show. Period.

Despite the fact that the domestic market has been down in recent years, particularly on the scooter side, EICMA itself is truly on a roll as attendance was up nearly 10 percent for 2013. With more than half a million consumers and virtually every motorcycle media outlet in the world on hand for the five-day show, there really is no denying EICMA is the “capo di tutti capi” of motorcycle events.

Since 1914, the OEMs and aftermarket have been assembling in Milan for EICMA. Originally held during alternating years with rival shows in Germany, France and the U.K., EICMA has evolved to become an annual motorcycle event. According to organizers, the 71st International Motorcycle Exhibition exceeded their wildest expectations in terms of attendance, number of exhibitors and major announcements from the OEMs utilizing EICMA for their world premiers of multiple new models. Space is too limited here to cover all the major new model announcements, let alone the countless aftermarket products that made their debut, but BMW, Harley and Honda really upstaged hometown heroes like Aprilia, Moto Guzzi and MV Agusta.

BMW Blows Minds In Milan
Since the INTERMOT trade fair in Cologne, Germany, is held every other year, BMW decided not to wait for the hometown event to bust out some big news. The OEM titan used the EICMA show as the stage to pay tribute to its past while rolling out two brand-new models that will define the company’s future. Consumers were treated to seeing the S1000 R four-cylinder roadster and the all-new R1200 RT touring bike juxtaposed against the Concept 90 tribute bike that California designer Roland Sands helped design. State-of-the-art rider equipment technology rounded out what is new for 2014.

However, there were plenty of other highlights on hand. Billed as “the new benchmark in extreme motorcycle touring,” BMW’s 2014 R 1200 GS Adventure captured the attention of the hardcores, while the R nineT roadster’s combination of classic design and modern technology should appeal to the cruiser crowd. For the futurists and green-minded customers, BMW shared its all-electric C evolution e-scooter as well as exciting special edition versions of the C 600 Sport maxi scooter and C 650 GT scooter.

Based on recent momentum working in conjunction with a forecast for these key new models, BMW is banking on record sales worldwide this year. “Milan was the perfect time and place for the brand to show its comprehensive and expanding model lineup, as it looks forward to an exciting future in all market segments — from e-mobility to six-cylinder luxury touring, and just about everything in between,” proclaims BMW.

For a video unveiling of the street models, visit: www.bit.ly/EICMA_BMW.

Harley Heads In New Direction
Not since the V-Rod with its Porsche-designed powerplant and metric fittings has Harley made such a dramatic departure from its venerated air-cooled V-Twin roots. EICMA saw the introduction of not one, but two small-displacement, liquid-cooled machines. However, given the tiered-licensing system in Europe and the world economy in general, Harley’s “heresy” actually makes sense.

The night before EICMA exclusively opened to the media, Harley previewed the first all-new bikes released in 13 years when it showed the Street 500 and Street 750 models. Powered by the “Revolution X” liquid-cooled SOHC 60-degree twin, these bikes will be marketed to non-traditional Harley riders around the world.

Most of the 750 Street and 500 Street bikes, on sale this spring for $7,500 and $6,700 respectively, will be made in Harley’s Kansas City plant; however, bikes produced in India will fuel the company’s overseas expansion. 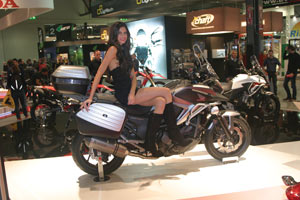 Honda Has “Automatic” Acceptance
Although Honda held out on the news of the Valkyrie’s return for the U.S. announcement at the Long Beach, Calif., International Motorcycle Show, they rolled out a host of Euro-spec products in Milan. We won’t see the new Integra, CBR300R, CB650F or the CBR650F in the U.S. right away, but we will get a couple of the new Hondas in domestic dealerships, namely the CTX1300, three CBR500 variants and up-spec CBR1000RRs.

Honda’s hallmark for Milan was the automatic transmission option. More than 30 percent of all Hondas sold in Italy last year featured DCT (Dual Clutch Transmission), and this option is available on five machines: the VFR1200F, Crosstourer, Integra (the first model to have the system as standard), NC700X and NC700S. First released on sale in 2010 for the VFR1200F, DCT is said to offer seamless shifting in both manual and its two automatic modes.

The crowd was also treated to the first public look of the HRC 450 Rally bike that is racing the Dakar this month. For the full presentation from Honda in Milan, go to: www.bit.ly/Honda_EICMA. 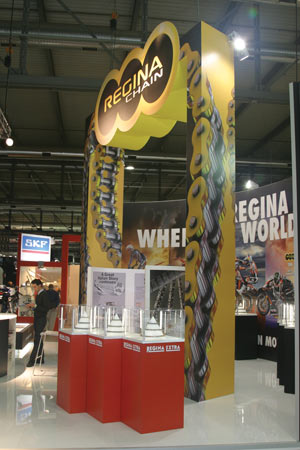 The Best Of The Rest
While the massive displays by Aprilia, Ducati, Moto Guzzi, MV Agusta, Vespa and others do the Italian industry proud, no trip to Milan is compete without seeing the dreams and visions that most of us would never otherwise see. From Borile and Caterham to the return of the Brough Superior and the Ossa marques, EICMA is a field of dreams for anyone in this industry. Some visionary U.S. aftermarket companies were looking to expand the American motor-cycle dream, most of them congregated in the Parts Europe Pavilion and the American Pavilion.

However, there is simply too much to squeeze in here. To paraphrase Julius Caesar’s vidi, veni, vici commentary, “We came, we saw and we were conquered by what was on display in Milan.” For the powersports industry, all roads really do lead to Milano!