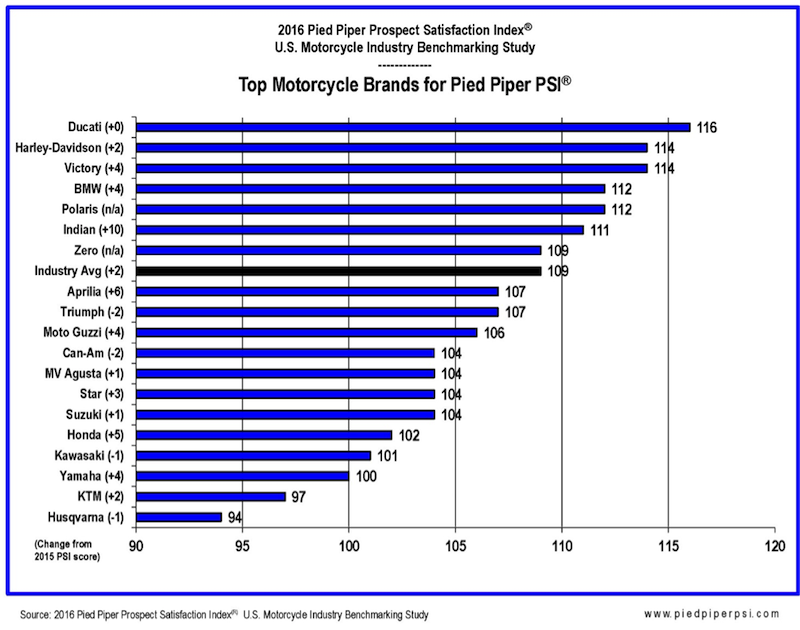 2016 marked the tenth year of the Pied Piper PSI motorcycle industry study, and ten years of results show that the sales process used by motorcycle dealers is more effective today than it was ten years ago. For example, compared to ten years ago, dealers today are almost twice as likely to offer motorcycle test rides, to ask about trade-ins and to request shopper contact information to allow follow-up. One of the few areas which declined over ten years was salespeople offering printed materials for the shopper to take with them, which dropped from 67% to 49% of the time.

Brands showing the greatest overall improvement from 2015 to 2016 were Polaris’ Indian brand, Aprilia, Honda, Victory, BMW, Moto Guzzi and Yamaha.  Brands with declines from 2015 to 2016 were Husqvarna, Kawasaki, Can-Am and Triumph.  In total, improvement by twelve of the nineteen brands generated an industry average PSI score of 109, a two-point increase from 2015, and the highest score Pied Piper has measured for an annual motorcycle industry study.

[pullquote]From 2015 to 2016, the most pronounced improvement industry-wide came from the “ask for the sale” portion of the sales process. [/pullquote]

Performance varied considerably from brand-to-brand, including the following examples:

Dealers have little immediate control over many aspects of selling motorcycles. The product, dealership location, financing and floor traffic are difficult for dealers to change in the short term. However, the sales process is completely within a dealer’s immediate control.

For more information about the Pied Piper Prospect Satisfaction Index, and the patent-pending PSI process, go to www.piedpiperpsi.com.