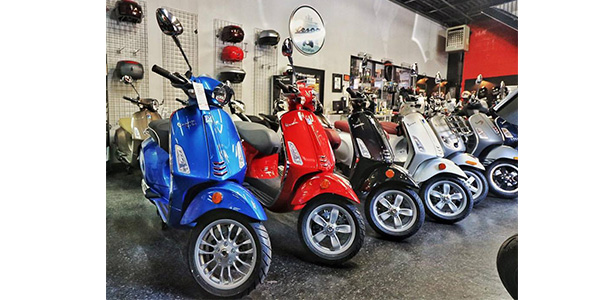 The two New York City Piaggio Group stores opened due to the owner discovering a need — a way to get around New York City despite congestion — and figuring out a way to fill it — Vespa scooters.

The two New York City Piaggio Group stores opened due to the owner discovering a need — a way to get around New York City despite congestion — and figuring out a way to fill it — Vespa scooters.

“I am originally from the car world,” explains Andrew Hadjiminas, president of the twin dealerships Vespa Brooklyn and Vespa Manhattan. “I was dealing in high-end exotics and was constantly exposed to the challenge of commuting. I looked for solutions, and Vespa was the answer.”

The two dealerships sell the Piaggio products imported to the United States: Vespa, Piaggio, Moto Guzzi and Aprilia, as well as an electric bicycle, Wi-Bike.

The Brooklyn dealership, opened in 2008, includes sales, parts and service. Due to the high cost of space in the area, the parking lot is an extra-wide sidewalk, with space for motorcycles and scooters — but not cars or trucks.

“We will have a large truck pull up to deliver bikes. We have to double park, people are honking, and it gets chaotic. My staff has gotten unloading down to a science, so that the truck can be on his way as soon as possible.”

The Manhattan dealership, which opened in 2015, is sales only, but has a service writer on staff. Manhattan customers can drop off their bikes at the Manhattan store to be taken in a van to Brooklyn for service, allowing them to jump on the subway and get back to work.

Both stores are stylish in different ways. The 10,000-square-foot Brooklyn shop looks more like a traditional dealership, but has a light uncluttered look, with a lot of Italian flair. It features a second floor that includes a lounge with windows overlooking the service department, so that customers can see their bike being worked on. The 2,000-square-foot Manhattan dealership is the only Piaggio flagship store in the United States. Piaggio conceived the Motoplex flagship concept as designer showrooms for its products, with a strong interactive element. In a flagship store, each brand is presented separately, in a way that showcases its strong points: Aprilia’s speed, Moto Guzzi’s touring capability and Vespa as the ultimate commuter.

Hadjiminas strongly believes, “Everyone is our customer.” All New Yorkers face the same hurdles of getting around town. Vespa Brooklyn/Manhattan’s outreach is based on the philosophy that most New Yorkers will want to own a Vespa when they learn how much a Vespa will improve their lives. The customer base is evidence for this philosophy. Unlike most dealerships, the customers are almost 50 percent female (national average for motorcycle owners is not quite 20 percent). Age range is high school to post retirement. Occupations range from factory worker to college professor.

Although Vespa sales are the dealership’s main business, they do sell motorcycles. Hadjiminas said he sells one Aprilia and two Moto Guzzis for every seven Vespas.

However, recently, he has seen people start to trade in scooters for a V7 Guzzi: “V7s are very easy to ride. It’s a smooth transition to step up to a Guzzi.”

Vespa Brooklyn/Manhattan does not do traditional motorcycle events, but prefers to support school fairs and other charity fundraisers by providing a Vespa photo booth. Parents and children have their photo taken with the Vespa. At the end of the day, the Vespa is raffled off to support the school or charity. People who are not currently riders see the Vespa up close in a nonthreatening environment and understand that it is small, light and easy to operate.

“Traditional advertising shows the scooters on a white background,” Hadjiminas said. “You don’t get an idea of its proportions. People see the photos of people sitting on Vespas and are able to visualize themselves with the bike.”

The New York City location provides Vespa Brooklyn/Manhattan with some unique opportunities. The company worked with a designer from Vogue for a fashion event where models, instead of walking onto the runway, rode on Vespas. This event was showcased in all sorts of media and provided nationwide publicity for the company. Jerry Seinfeld arranged for Vespa Brooklyn/Manhattan’s products to be featured in his Netflix show, “Comedians in Cars Getting Coffee” — again, a major publicity coup.

However, Hadjiminas has found that most of his customers are brought to the shop through referrals and social media.

“We are a relationship based operation — it’s how we communicate, and how we do business. We have been on social media since day one because it’s the most efficient way to get our message across. We want to provide people with the information they want to know. We want people to see us as a reference and when the day comes for them to purchase, we are the first ones that come to mind. Word of mouth is the most common reason for new customers to come in.

“We take photos of customers picking up their new bikes and post them on our website and social media channels.”

In turn, customers link to the photos in messages to family and friends. “That’s me with my new scooter!”

“People see the photos, picture themselves with a Vespa and come into the dealership,” Hadjiminas continued. “They tell my sales reps, ‘I saw this photo and it got me thinking.’”

Customers are encouraged to communicate their opinion of the dealership. Hadjiminas monitors Yelp and other rating websites and attempts to address any complaints as soon as possible. Testimonials are posted on the website.  He posts regularly on Facebook and Instagram.

A new venture for the company is a YouTube channel, “Meet the Riders.” Vespa Brooklyn/Manhattan’s team now includes a videographer who meets with local riders and interviews them for the series. The videos showcase the variety of people who travel on Vespas and shares their experiences.

Hadjiminas is looking forward to the future, and most particularly to the impending arrival of the new Vespa Elettrica.

“It’s an important step, a really significant step. The initial reactions have been positive. Vespa Elettrica is good for 75 miles, which means that most New Yorkers can commute for most of a week before it has to be charged.”

Vespa Elettrica will also open new business opportunities. The former Brooklyn Navy Yard is not far from Vespa Brooklyn, and it is being transformed into a business park. Many of the thousands of people who will work there will want a Vespa or an electric bicycle as a commuter.

“It’s an entire new audience. We are working on several programs for employers and employees to purchase a new scooter with certain rebates. There is also the possibility of taking electric Vespas up in the freight elevator and charging them during the work day. That would be a nice employee perk. Usually you can’t park a gas-powered vehicle in a building, but that is not a problem with electric scooters.

“We have just celebrated our 10-year anniversary as a business and we are excited for the what the future has in store. We’ve seen growth every year we have been in business, and we plan on continuing that trend. We are a solution for mobility for people.”