Being in business for 50 years in the same high traffic location goes a long way toward ensuring that your customers will continue to find your shop. That’s certainly an advantage for Joe and Angie Robison, longtime proprietors at Robison Cycle Sales on International Speedway Boulevard in Daytona Beach, Fla. 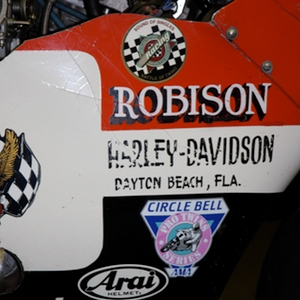 Being in business for 50 years in the same high traffic location goes a long way toward ensuring that your customers will continue to find your shop. That’s certainly an advantage for Joe and Angie Robison, longtime proprietors at Robison Cycle Sales on International Speedway Boulevard in Daytona Beach, Fla. But there’s more to the success of Robison besides mere staying power; the unshakable loyalty of its customers was built on a foundation of mutual respect and common courtesy — characteristics that never go out of style.

Starting in 1962, Robison was the one and only franchised Harley-Davidson dealership in Daytona, a plum spot that might have turned to swaggering attitude for less well-grounded people. But then as now, the Robisons maintained an atmosphere of grassroots cordiality and provided both proficient mechanical service and considerate customer service, all in the sort of authentic ambience that’s hard to find anywhere anymore.

As the local Harley dealer during Daytona Bike Week for decades, Robison made racers welcome, from factory race teams to privateers. Remember, racing used to be the heart of Bike Week. “They’d work all night to get the bikes ready, so I just stayed here all night, too,” said Joe, who’d raced WRs as a young man. The helping hand philosophy extends to every day of the year, too, as evidenced by the selection of tools available near the front door, accompanied by a sign reading: “For Your Use. Please Return.” And it’s been there “forever.”

Part of the Robisons’ secret is this: they treat everyone the same; there are no judgment calls here. Angie greets every person who comes into the unpretentious shop and from the very start, she insisted on a standard of deference to the customer. “I told our girls, ‘You say: sir, may I help you?’ or you won’t be working here,” she said. “And it worked. We never had any major problems in the shop all those years. I always said we had the good, the bad and the ugly — but if you respect them, they respect you.”

Added Joe, “Back in the ‘80s, we had a lot of characters. That was part of the game. But that’s what we enjoyed, talking with them.”

Robison was a destination, a must-visit stop, for the Harley faithfuls who came to Daytona Beach — and it still is for U.S. riders and foreign visitors alike. When Bruce Rossmeyer bought the franchise in 1993 and became the area’s sanctioned H-D dealership, Joe and Angie changed their shop name to Robison Motorcycle Sales & Service, staying right where they were and  doing what they’d done for the prior 30 years. By 2012, it was time to celebrate the 50-year mark, and the party went down in style.

Robison is managed these days by Jecoa Simmons, Joe and Angie’s grandson, and he has fine footsteps plus solid business convictions to follow. They work on all Harley-Davidson models but specialize in Shovelheads and Evos — having access to replacement parts for these older models and operating a full machine shop. Though he uses current technology to meet his customers’ needs, Jecoa is cognizant of Robison’s nostalgic feel, so he keeps the computers hidden behind the old wooden counter and vintage cash register. “It’s a functioning museum,” he said, standing in front of a massive parts catalog in a heavy metal stand. Further evidence is found in the posters and photographs hanging on the walls of the shop, in piles of parts left behind in the garage by race teams, and in the shop-sponsored race bikes displayed in the showroom.

“When we used to go to the Speedway in the ‘80s, he was an icon out there,” said Jecoa of his grandfather. “He had his own garage and knew everyone. He’s so humble, but I don’t mind boasting about him. I’m proud to talk about him and everything he’s done.”

Joe and Angie both come into the shop regularly. It’s always crowded during Bike Week but plenty of people stop in other times just to say hello, remind Joe and Angie of their last visit, or relate a story from years past about being at Robison. “We have a huge extended family,” said Angie. “I look around at all of these things and sometimes it will jar a memory. We have so many good memories in this old building, I wouldn’t trade it for the world.”

So maybe you can’t flip the switch on the flux capacitor and set the time gauge to give your shop 50 years of traction, but if, like the Robisons, you earn customer loyalty one day at a time, you’ll be well on your way to the goal.