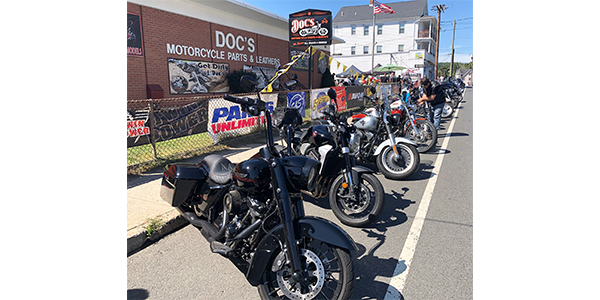 Doc started making his own parts, found that he was good at it and saw a business opportunity. In 1969, he started selling hand-crafted parts for British motorcycles and Harley-Davidsons.

In 1968, Cosimo D’Occhio (universally known as Doc) came back to Waterbury, CT from military service and started building himself a motorcycle. It was at the height of the chopper craze, but very few parts for custom bikes were available at retail. Doc started making his own parts, found that he was good at it and saw a business opportunity. In 1969, he started selling hand-crafted parts for British motorcycles and Harley-Davidsons. People liked his offerings, and the business grew. At first known as Waterbury Cycle Specialists, in 1973 the shop became known as Doc’s Cycle Specialties.

Fifty years later, Doc’s, now Doc’s Motorcycle Parts, is still in business. The company is now run by Doc’s son Mike (everyone calls him Mike Doc). Over the years, the parts for sale became sourced from independent distributors instead of being made in house, and the number and variety of offerings mushroomed. The store has moved several times, due to outgrowing the available space.

At present, customers can go online and flip through the catalogs for Drag Specialties, Tucker, Biker’s Choice, Kuryakyn, Parts Unlimited and Western Power Sports. Doc’s also has a special military themed catalog. A large percentage of the offerings of these catalogs, and numerous items from smaller wholesalers, are in stock, allowing customers to get what they need immediately — no waiting for UPS. Doc’s also stocks parts for Panheads and Shovelheads, Mustang seats and a large number of items for Japanese-, European- and British-made motorcycles. The company prides itself on having one of the largest parts selections in the Northeast.

Selling parts led to selling pre-owned motorcycles. In addition to a selection of road bikes, Doc’s displays children’s and youth dirt bikes, making it possible for families to go trail riding on a budget.

In 1998, Doc’s moved to the present location on Thomaston Avenue and started a service department. Mike explained that Doc’s will work on all makes and models, but has the most experience with Harleys.

“We will work on any Harley-Davidson, from the Panhead on up. We worked on four Pan’s this past month,” Mike said. “Most of the bikes that come in are from the 1990s and newer, including this past year’s model. Customers tell us that they get turned away from some dealerships with a 10-year-old bike.”

Doc’s also customizes motorcycles to customer specifications and takes on parts of a customer’s build that go beyond their experience or tooling.

Mike attributes the success of the business to being in the right place at the right time, but most importantly, providing excellent customer service.

“For the last three or four years, our motto has been, ‘Kill them with kindness.’ I tell my employees, ‘The customer on the phone doesn’t know that you had a rotten morning, or have just dealt with a not-so-kind customer. You are the face of the business, and you don’t want someone to write a nasty review on Yelp or Google about us. If you make a mistake, apologize and make it right,’” Mike added.

“Our employees stay with us for a long time,” Mike said. “We are blessed by having long-term mechanics. Our oldest employee retired from Doc’s after 30 years. We are going to give him a plaque at the 50th anniversary celebration. One current employee has been working for us for over 20 years. Retaining employees is a combination of many things, but most important to us, is our family environment. We are Italian, and our employees are like family to us. My mother will come down to the shop with homemade treats. My grandmother, when she was alive, used to bring jars of her homemade pasta sauce. If an employee needs to bring a child to work, it’s OK with us. We hire older kids of employees to mow the lawn and help out around the dealership.

“Former employees will come back and help out for our events, because they enjoy being at the event. We have a Customer Appreciation Day every year, with food, a bike show and prizes. This year is special because it’s our 50th anniversary. We are inviting Erin Troy Danner and his band. It’ll be a two-day event.”

Doc’s is proud of not only being family oriented, but also community oriented. Doc’s boosts the town where the shop is located by putting on bike and car shows, contributes to local initiatives and sponsors local events.

Doc’s, like most modern businesses, has largely given up on print advertising. Due to the shop’s long-term existence in the community, many customers come in due to word of mouth referrals. Doc’s does buy space in the Connecticut Cruise News, a local motorcycle paper, and sometimes does billboards and mailers.

“I am always looking to engage millennials,” Mike said. “I put in a lounge area, as a place to hang out, with TV screens. It uses up floor space that would otherwise go to displaying products, but I feel that it is important to make customers feel comfortable and at home. We spent a lot of time developing a presence on social media. I like to feature what the younger generation likes, such as newer-style helmets. IPA beer is really big around here, and we partnered with a local brewery to have our own private label Doc’s IPA.

“We have also seen the women’s market grow tremendously in the last five years,” Mike added. “We have done a lot to market to women. Part of it is educating the ‘old school’ around here. I point out that everyone who walks in here is a motorcyclist, and that if a husband and wife come in, you talk to both of them. I make a point to educate employees — if it’s HER bike, you talk to HER.”

Doc’s, in addition to parts and service, has a huge apparel department, both in the store and online, with an extensive selection of gear.