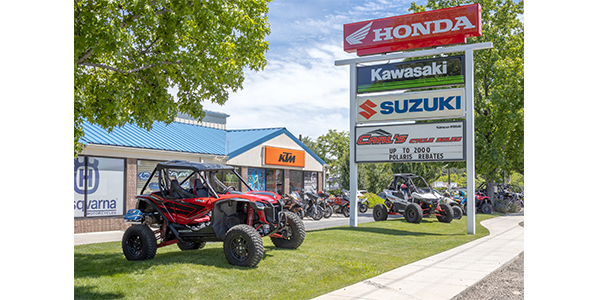 Jack Struthers was one year old when his father, Carl, started Carl’s Cycle Sales. The Bridgestones he was selling are now collector’s items. Carl raced both snowmobiles and off-road motorcycles. He not only gained a lot of knowledge through his racing, but acquired the knack of being able to pass on his knowledge to others.

Carl’s business prospered, and he branched out into snowmobiles. Boise, Idaho is a great place for snowmobiles; it gets a lot of snow in winter and has numerous nearby national forests. After a brief period with Snow Pony snowmobiles, Carl’s took on Sno-Jet snowmobiles in 1968, and kept on with the brand after it was bought out by Kawasaki. After Kawasaki stopped selling Sno-Jets in 1982, Carl’s kept Kawasaki motorcycles, but also took on Honda and Polaris in order to continue to cater to the snowmobile enthusiasts in the area. Carl’s worked its way through the business slowdown of the late-’70s and ‘80s and continued to turn a profit while other dealerships in the area were closing.

Jack explained that the business did well because, “Dad was an enthusiast. People would rather buy from a dealership with knowledge and experience – one that knows what works in the area. People can either shop for cheap, and there is no way a brick and mortar can undercut the internet, or people can go for knowledge and experience. It’s always worked for us.”

Meanwhile, Jack was growing up in the dealership, helping out and learning to ride. The family went camping and on- and off- road riding together, and little Jack was on a motorcycle from the age of seven. At the time, Idaho would allow 14-year-olds to get street motorcycle licenses, and the family would go off on several day rides together – mom and dad on one bike, his big sister on a second motorcycle and Jack piloting a third, with his little sister on the back.

“You wouldn’t think of allowing a kid to go touring with his sister on the back these days, but it seemed perfectly normal for us at the time,” Jack said.

Jack had competed in some local motocross races earlier, but really got the competition bug at the age of 17. He excelled at cross-country snowmobile racing, and by the time he retired in 1996, had won back to back championships on his Polaris. In the summer, he entered local motocross races. Jack’s prowess on snowmobiles led him to be inducted into the Snowmobile Hall of Fame in 2004.

“Racers want to succeed,” Jack said. “I apply the same attitude to my business. Business owners have to be competitive, to work through adversity and to keep going, just like racers.”

One spinoff from Jack’s racing career is the performance shop at Carl’s.

“Carl’s Performance is quickly gaining a reputation as the shop for Polaris engine and suspension work,” Jack said. “At Carl’s Performance, we are not only snow experts; we also specialize in off-road, ATV, side-by-side, street and dual-sport performance tuning.”

Carl’s sells and installs turbo and big bore kits, is a dealer for Fox Shocks and does suspension and engine tuning.

Another profit center is the online store. Instead of trying to compete with online merchants, Carl’s has joined them. The dealership offers online shopping on its website, including an accessory superstore, where customers can find products by Alpinestars, Helmet House, Tucker, Parts Unlimited and Western Power Sports. OEM parts are available from Honda, Suzuki, Polaris, KTM and Husqvarna, as well as Victory.

Even more important for success than a competitive attitude and online shopping, is the ability to locate and retain good employees.

“The average employee works here around 10 years. It is very important to have a good work environment,” Jack said. “I try to offer a retirement package, decent working hours and vacation. It’s hard to do. Every time I talk to other business owners, we come back to the same thing – finding and keeping good employees.

“Most of my employees ride – I think that is really important. After all, we are selling knowledge and experience, and you have to be on a bike, a jet ski or a snowmobile to get that experience. I like to encourage my employees to ride and also to do stuff, from going on multi day trips to off-road competition. All the cashiers either ride or go riding as a passenger.”

Jack also thinks it is important to encourage customers and potential customers to schedule their social lives around the dealership and puts on events throughout the year. Every spring, Carl’s puts on a Chili Ride in the desert. His staff trucks in a pot of chili and fixings.

“We talk to customers and bring out some of the new products. We’ve been doing the Chili Ride for 20 years and it is still popular,” Jack said.

In Idaho, snowmobile season starts in late fall, which is also when Carl’s puts on its first snowmobile event. A second snowmobile event takes place in January, the middle of the season. There is a demo event for motorcycles in March or April. All these different events are announced on Facebook and reminders are sent out via email blast.

“There’s still a little bit you can do in TV and radio. You can get the name of your business out there while people are stuck in traffic,” Jack said. Covering all bases, he also puts an ad in the local free paper.

All the different events present opportunities for people who are considering motorcycling or snowmobiling to put a toe in in an uncommitted way. Jack encourages people to bring friends to get more interest in powersports.

The dealership has a good relationship with the Boise motorcycle training program, Stars, which is another source of new customers.

The years 2007 and 2008 were rough for Carl’s, as was true for most dealers. Carl’s survived this downturn, as the shop survived previous contractions, and is looking towards the future with optimism.

“The last five years have been better,” Jack added. “We are still concerned about losing more of our off-road areas. It’s important for people to be outdoors, and that is what has kept us in business – helping people be outdoors.”