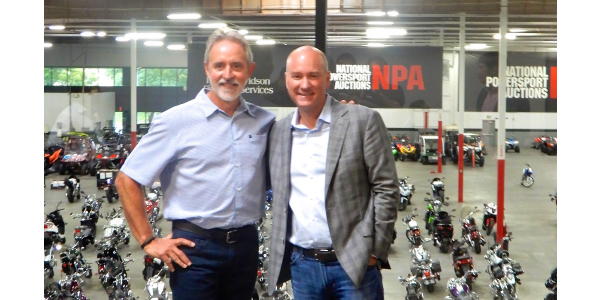 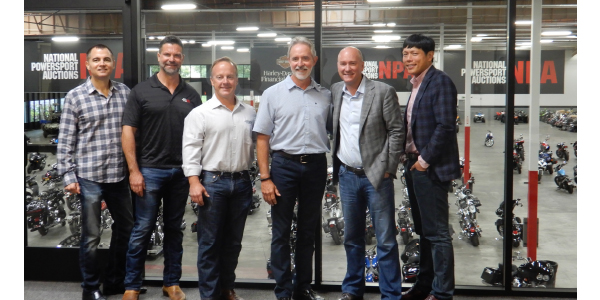 On June 12, 2017, the business newswires ran a small snippet on some company called “Copart” acquiring another outfit known as Cycle Express LLC. Mergers and accusations happen every day and most of the financial folks glossed over this. However, hidden behind the innocuous headline was the fact that the world’s largest powersports and auto auction houses had just joined forces.

Cycle Express LLC, conducts business primarily as National Powersport Auctions, the world’s largest pre-owned powersports vehicle remarketer, while Copart is a global operation grossing well north of $1 billion… in other words, this is big news! MPN crashed the party as the details were simulcast to NPA facilities in Atlanta, Cincinnati, Dallas and Philadelphia as NPA co-founder and CEO Cliff Clifford and Copart’s CEO Jay Adair explained the deal and what it will mean moving forward.

“We share a common culture and it really is going to be a great relationship,” explained Clifford in his opening remarks. “Jay is a partner and a friend. Copart is the best in the world at what they do, and with their help, NPA is going to grow… rapidly!” Although terms of the deal won’t be disclosed, the bottom line is NPA now has access to several more resources including capital, logistics and multiple new locations at
their fingertips.

”We are very excited about teaming up with Copart,” Clifford said. “Leveraging Copart’s resources and capabilities with NPA’s industry expertise and market leadership will allow us to kick NPA into high gear. We’re looking forward to taking NPA to a whole new level of growth and success.”

While most dealers are familiar with NPA in the powersports space, Copart and the car side was an unknown entity to MPN before the acquisition. However, we suspect the industry will be hearing more from them and their new partners at NPA.

“NPA is the leader in the powersports auction industry and shares our ownership mindset, commitment to challenging the norm and focus on delivering results,” added Adair. “We are thrilled that NPA is now part of the Copart family and believe the NPA team’s expertise will enhance our capabilities.”

He also confirmed that it will be business as usual for NPA. “We are in this for the long term. This is not one of those churn and burn deals,” claims Adair. “Look at Copart’s 35-year history.” Although Copart is a publicly traded company, Adair explained they still embrace the same family values the company was founded on by Willis Johnson back in 1982.

“It is part of the DNA that makes up Copart,” said Adair. “We have been public for 22 years, but we operate as long-term owners and don’t get too caught up in the distractions of trying to perform from quarter-
to-quarter.”

Jay Adair started at Copart by driving a fork lift at the original auto wrecking yard that evolved into a global force. Over the years, Adair worked his way up through the ranks to head up the now $1.4 billion per year operation.

He stopped driving the fork lift to become operations manager in 1989 and became VP of sales and operations in 1990. He has been CEO since 2010, but he is still driven by the love of the business and commitment to Copart’s loyal customer base and long-term employees (more than 4,500 colleagues are currently part of the Copart family).

For example, Adair noted, “I hired Sean Eldridge 27 years ago to wash cars in our original Vallejo wrecking yard… He is now chief operating officer, responsible for handling better than a billion dollars. Like I say, we are a family business.”

“We share a common culture with Jay and the Copart family,” confirmed Clifford. “We work hard, play hard… and we play to win.”

With that, Adair addressed the elephant in the room. “There will be no changes to NPA management or day-to-day operations. You guys know what you are doing… and you do it very well.”

There is definitely no plan to change from the live auctions employed by NPA to Copart’s online-only format. “I don’t see any changes for at least a year,” reiterated Adair. Instead Copart will give NPA a war chest to work with and a team of real estate professionals to expand the footprint.

However, it was here that the two CEOs seemed to disagree. “Remember the heavy lifting it took to get the Philadelphia deal done?” Clifford posed. “Instead of me and Jim Woodruff having to fly around looking at facilities and doing real estate deals, Copart has an entire team of real estate professionals… with their help, NPA could easily have three or four new facilities…”

“Make that five to 10 new auctions,” Adair interjected. “By the end of the year!” He is only half-joking. Although Copart started with one wrecking yard and evolved into an online auction business, Adair also sees Copart as a real estate company first these days, with very strong IT and distribution operations.

Copart owns more than 8,000 acres of prime real estate in urban areas like Chicago and Los Angeles, which the company uses to warehouse used cars.

“They aren’t making more land in urban areas,” he explained. “When we bought the old brewery property in Los Angeles in 1995, it cost us $7.5 million… now it could be worth 100 times that, if it was even available.” Guess that does make Copart more than a car auction company! (See “About Copart” sidebar.)

“When I first met Cliff in 2005, I had no idea NPA’s business model even existed, but I have been watching NPA closely since then,” concluded Adair. “Before the 2008 crisis I used to think the auction business was recession-resistant. Now I know we are recession-proof!” 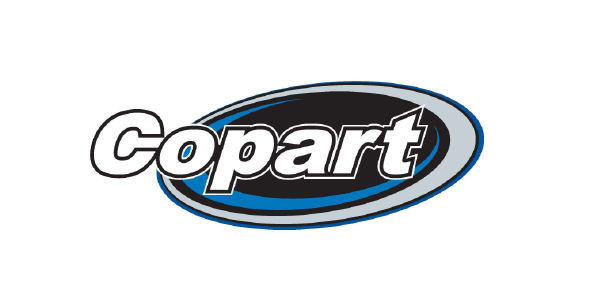 Just like National Powersport Auctions, Copart is one of those great success stories that nobody outside the immediate industry seems to know about. Founded in 1982 by current CEO Jay Adair’s father-in-law Willis Johnson, Copart has very little interaction with the general public. And just like Cliff Clifford and the NPA management team have done behind-the-scenes, Copart has emerged as a global leader in B2B vehicle auctions.

When Willis Johnson opened a single salvage yard in Northern California, nobody knew what kind of wild ride was about to begin. In the past 35 years, Copart has become a global leader in online vehicle auctions and a premier destination for the resale and remarketing of used vehicles.

Now headquartered in Dallas, Copart’s innovative technology and online auction platform links buyers and sellers around the world. From that single salvage yard, Copart has grown to more than 200 locations in 11 countries. Even more amazing is the fact that Copart sells more than 1.4 million vehicles per year, with 125,000+ up for auction every day!

Copart operates in the United States, Canada, the United Kingdom, the Republic of Ireland, Brazil, Germany, the United Arab Emirates, Oman and Bahrain, India and Spain. Copart has been a publicly traded company since 1994 (NASDAQ: “CPRT”). Copart’s success has earned a place on Forbes “200 Best Small Companies” list nine years in a row, as well as being featured on the TV show World’s Best as “The World’s Best Remarketing Company.”