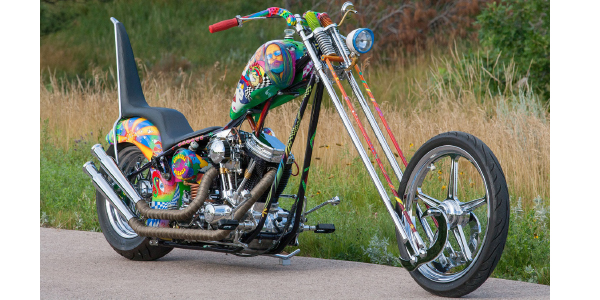 Dear Ma: I have a question for you, can you see the future up there in heaven? Because if you can, I would like to know if the motorcycle business will ever get back to what it was 10 years ago. Business has been a struggle for the past eight years and I am getting pretty sick of it.

Don’t get me wrong, I plan to own Strokers Dallas & Strokers Ice House for the rest of my life. BUT, I am SICK of the day-to-day, month-to-month, year-to-year struggle that this economy has saddled us with for the past eight stinkin’ years! SICK OF IT!

I guess we are in the same boat with boat dealers (get it Ma?) and we are on par with golf courses (I did it again). Dad told me years ago that owning a motorcycle shop was like owning a Dairy Queen. He said that a DQ is busy in the good weather and slow in the bad weather. Right on as usual, Pop!

If it sounds like I’m depressed, I’m not really. Spring has sprung around here and we are really busy. We have five ground up custom bikes we are building right now and they are all CHOPPERS! I hope you can see my face Ma, because I am smiling ear-to-ear, and you know I ain’t much of a smiler! I think choppers are making a comeback.

We built some cool choppers last year and this year is starting out fast! I’m seeing the big wheel bagger trend slowing down a little. It ain’t dead, but it’s not where it was a few years ago either. I was telling some cat the other day that riding a custom bagger will make you smile, but riding a custom chopper will blow your mind, and I ain’t kidding either!

The Victory shutdown is still unfolding and our customers are still spitting mad over it. I try to explain it to them that it is a business move, but they don’t care. They are passionate about their Victory Motorcycles and they hate to see Vic go away. But, they can still enjoy riding their Vic’s until the cows come home. We are actually selling some new Vic’s since the announcement.

The rebates are what’s helping us sell the bikes. Funny part is, those weren’t even my pants! Just kidding about the pants Ma, the real funny part is it’s the current Vic owners that are buying new Vic’s. They know that once all the new Vic’s are gone, there will be no more new ones!

You would think that maybe some riders of other brands would be buying up some of the new Victory Motorcycles, but they ain’t, at least not here in Dallas they’re not.

I gotta get back to the fab shop and check on the boys. I had this crazy idea for a gas tank on one of the Custom Choppers and I want to go see how my fab guy is coming on it. The crazy part is, sometimes we do a ton of work making a custom part and then after it’s completed and installed, I won’t like it and we wind up not using it even though we may have spent several days of labor and lots of material making it.

Not long ago, I wanted to chop up a rear fender and try an idea I had to see if it would work and if it would look good. Well, it would work just fine but I didn’t like the finished look. I HATED the finished look. So even though it was my idea and we spent two days chopping up this rear fender, we threw it in the scrap pile. Oh well, that’s how it goes in the custom world, there ain’t no backspace key like there is when I write an article!

Anyway, I gotta go for now Ma. It’s 7 p.m. and Susie has my supper ready at 7:30 every night! If I ain’t there, her and the three dogs eat without me so I better mosey on home! Plus tonight is a big night, we’re eating Mama’s meatloaf and then watching Shameless on Netflix.

I Love You, Ma!
Your boy, Rickey

Advertisement
In this article:Can ya dig it?, Choppers, Dallas, Patsy Cline, Victory Motorcycles

Choppers, Meatloaf & Patsy Cline: These Are a Few of My Favorite Things