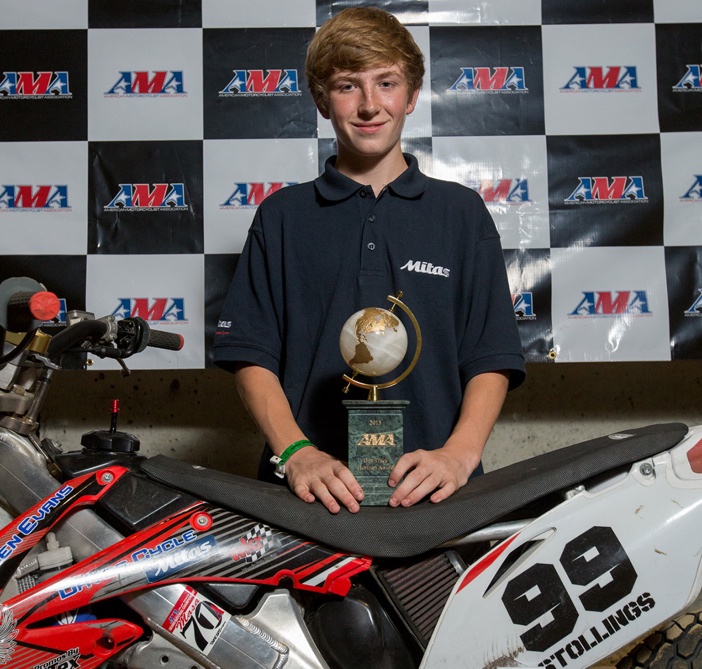 “American dirt track racing is rich with the history of racers who have ultimately become the most talented motorcycle competitors in the world,” said AMA Track Racing Director Ken Saillant. “The route to this level of success is a long one, and it begins in the amateur ranks. As Kevin Stollings graduates to the professional ranks, he has left no question in the minds of his competitors, family and friends that he has the talent to succeed at the next level.”

AMA Horizon Awards are presented annually in dirt track, motocross and road racing to riders showing the most promise for success as a professional racer.

The AMA Fast Brain Award, sponsored for the by dirt-track tuning legend and AMA Motorcycle Hall of Famer Bill Werner, Zanotti Racing’s Dave Zanotti and AMA Life Member Stan Simpson, recognizes a rider whose speed on the track is matched by stellar grades in the classroom. The 2015 AMA Fast Brain award was won by Declan Bender, 9, from Cooksville, Ill. Bender competed in the 65cc Modified (7-11) and 65cc DTX (7-11) classes.

The 2015 AMA Youth Dirt Track Rider of the Year award was David Kohlstaedt Jr. from Puyallup, Wash. The 11-year old won an overall championship in the 85cc Modified (7-11) class.