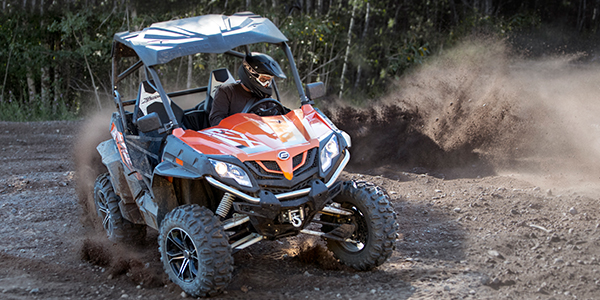 In a maturing industry like powersports, manufacturers have a tough job trying to find a place in the market.

For some, that means always going bigger – a turbocharged 170 horsepower engine today, 190 horsepower tomorrow – for others, 50 years in the industry has gotten customers accustomed to seeing their brand in the showroom and on the trail year after year.  For a company like CFMOTO, that means they’ve had to do things differently to stand out from the crowd.

“We’ve been building engines since 1989,” said CFMOTO U.S. Sales VP Derek Jordahl. “We’ve built motorcycles for KTM, and internationally you’ll see our machines everywhere. But in the U.S. we’ve only been an off-road company since 2011 – we’re the new kid on the block – and that can be a strength because we’re starting from a clean slate.”

One place that clean slate is obvious is in CFMOTO’s 2017 vehicle lineup, which includes a mix of ATVs and UTVs.

“Our 2017 lineup is 10 vehicles,” said Jordahl. “We have four ATVs, four sport side-by-sides, and two utility side-by-sides.  It’s clean, simple, and because we keep our lineup lean, every machine comes fully-featured.”

“That’s $1,000 to $2,000 less than similar machines from other companies with steel wheels, no power steering and no winch,” said Jordahl.  “We offer a lot of value in our vehicles.”

Often, a full-featured vehicle in a lineup is sold as a special edition and a value machine is sold as a loss leader, but for CFMOTO, from their 60” ZForce 800 EX sport side-by-side at $11,599 to their UForce 500 dump box utility side-by-side at $8,999, every vehicle is positioned as an outstanding value for the customer while still holding strong returns for the dealer.

“The margins on CFMOTO are light years better than anything else I sell,” said Randy Bedeaux, co-owner of Leo’s South in Minnesota. “When other dealers call me to ask me about picking up the brand, I tell them ‘you’re crazy not to get this product because you’re going to make so much more money.’ I don’t know how you can’t sell them.”

For Town & Country Sports Center in Cement City, Mich., CFMOTO has become the number two brand in their eight brand store behind only Harley-Davidson.

“They sell themselves,” said owner Tom Petitto. “When a customer sees everything they can get and stay within a budget, it’s an easy sell at that point.”

CFMOTO USA headquarters is based in Plymouth, Minnesota, a suburb of Minneapolis, and houses the company’s technical support team, sales and marketing, as well as the brand’s parts warehouse. CFMOTO CFO Eric Fan has been a leader at the company since the building opened in 2009.

“We want our dealers to be financially healthy and confident about selling CFMOTO,” said Fan. “Our parts warehouse had a 98% fill rate on service parts for the last quarter of 2016, and we’ll strive for 100%. We protect our dealers’ territories, we provide year-round on-demand ordering, and we allow our dealers to carry exactly the models they want on their showroom floors.”

“We are committed to being the best,” said Fan. “We are a rising star that offers good product, exceptional service and superb parts availability. We take care of our customers.”

CFMOTO: The Sweet Spot In The Showroom