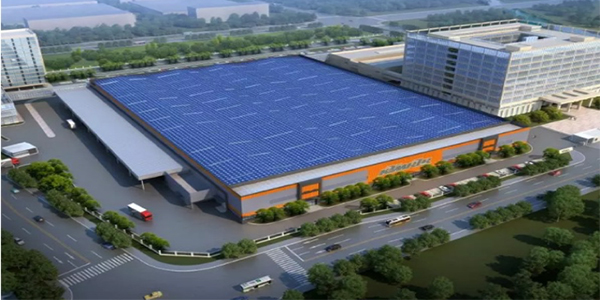 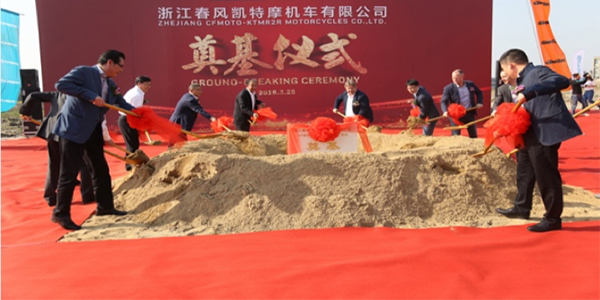 Capitalizing on a very successful 2017 calendar year, CFMOTO and KTM kicked off the official start of their joint venture project with a ground-breaking ceremony of their new production center on March 28th, 2018.

Minjie Lai, general manager of CFMOTO and KTM AG COO Mr. Harald Plöckinger were on hand at the groundbreaking ceremony. They each reflected on how far both companies have come in the past six years.

Lai said that “the joint venture will bring CFMOTO’s R&D and manufacturing capability to a whole new level. CFMOTO will benefit from KTM’s advanced technology and profound experience from years of being a leader in the power sports industry. KTM recognized how our manufacturing capacity, supply chain management and channel development could help implement their global strategy.”

The joint venture, which was initially signed on Oct 11, 2017, will result in an estimated annual output of 50,000 motorcycles. Ten different motorcycle models will be designed and put into production at the new 1 million square foot facility.

When completed, the new production facility will occupy an area of 10.57 acres and will consist of offices, production, R&D centers, test ride areas and a retail center.

“It was November 2011 that CFMOTO and KTM established the original strategic cooperation agreement. CFMOTO started as a KTM importer in China and later started the CKD business. CFMOTO is excited to play an increasingly important role in KTM’s strategic global development” said Lai.

Lai emphasized CFMOTO’s continued commitment to growing the powersports industry: “We believe what we have achieved in 2017 lays a solid foundation for a tremendous 2018. CFMOTO will continue to be 100% committed to the power sports industry and enhance a greater cooperation with our trustworthy partners while working to build a magnificent future together.”