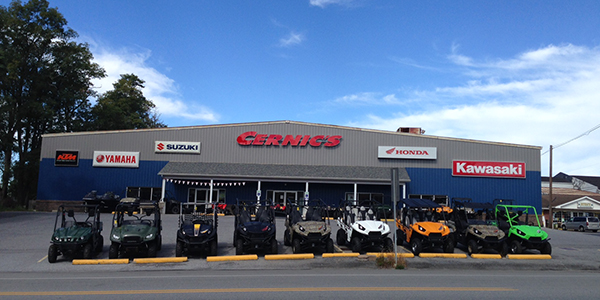 The fans are out of their seats screaming. It’s the last lap and the two frontrunners are swapping the lead like madmen. Round the last turn, taking some air on a whoop, the checkered flag is just ahead… and the guy with the Cernic’s decal wins by a wheel.

Although this is only an amateur race, a crew from Cernic’s, a multiline dealership in Johnstown, Pennsylvania with a serious off-road racing habit, has set up in the pits with a decent selection of tires, oil and parts, ready to keep competitors running their best.

“We are into dirtbikes,” says Jason Keller, general manager of Cernic’s. “We provide support for 100 amateur riders. We do a lot of sponsorships. Travis Pastrana is our star, but we also sponsor Dylan Slusser, Preston Masciangelo, Steven Henderson and Luke Fauser.”

In case it sounds like the guys from Cernic’s are just out to have fun, the dealership, Suzuki’s top off-road dealer, is actually executing sound business tactics. Cernic’s marketing relies on the fact that many motocross fans either ride themselves or have family or friends who ride.

Supporting a dealership that supports their passion is a natural progression. There is an old saying, “Win on Sunday, sell on Monday.” Cernic’s has taken this motto and developed it into a modern day marketing strategy.

“Customers come in through word of mouth, and buy from us due to our competitive pricing,” says Jason. “We also have a reputation for the best customer service in the world. We do anything you can imagine for off-road machines.”

Cernic’s started when Ed Cernic, Sr. opened Cernic’s Suzuki in Johnston, a small town East of Pittsburgh. It was 1969 and things were looking up for retailers of Japanese-built motorcycles. The dealership survived a flood in the early ’70s, regained momentum, prospered and gradually added more lines.

KTM came on board in 1985 and Honda in 1992. A second store opened in 1997. Yamaha and Kawasaki were added in 2007, and in 2011, the main Cernic’s dealership moved to its present, one-stop-shop location. The dealership is still owned by the family, with Ed Cernic Sr., Ed Jr., and Jeff Cernic the most active family members. Jeff, a member of the younger generation, is very active in off-road racing circles, and manages Pleasure Valley

Raceway, a nearby motocross track. Cernic’s is proud to state that the dealership has helped more riders reach the professional ranks than any other company in the U.S. Cernic’s motto is, “We support the sport from the roots up!” 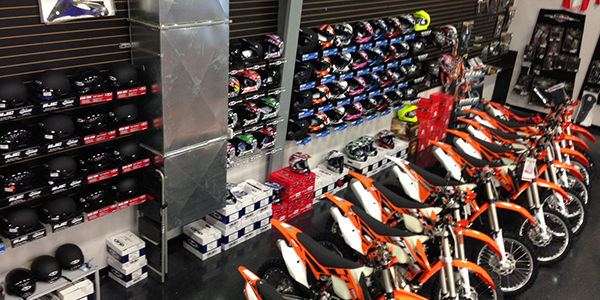 Although the off-road market (motorcycles, ATVs and UTVs) is a focus, Cernic’s also sells personal watercraft, scooters and street bikes. One growth area is parts and gear sales. Many off-roaders live in rural areas where parts and gear availability is limited.

Customers – many far from Cernic’s immediate area – learn about Cernic’s at races and start going to the dealership website for graphics and trim kits, goggle tearoffs, motocross gloves, handguards and wheel spacers.

Racing is notoriously hard on parts and consumables, and keeping those dirt bikes rolling also keeps money rolling in the door. Racers wear out gloves and boots, and young competitors outgrow their gear, leading to repeat sales of protective gear and clothing.

“We have been growing,” says Jason. “A lot of our customers are from all over the United States. We also sell parts nationwide. ”Cernic’s is listed on as a resource on the website of several off-road magazines and racing associations, and its ads on these sites are another source of customers. Due to the nationwide customer base, the dealership maintains an “800” number for out-of-area customer service.

Parts are front and center on the dealership website, which maintains a very detailed index of items for personal watercraft, ATVs, UTVs and snowmobiles, as well as motorcycles. Street riders are not neglected – there are 39-pages of street/touring accessories, including aftermarket Gold Wing parts, aggressive street riding and road racing shocks, and a large selection of Arlen Ness components.

For women off-roaders who may have problems finding gear that fits, Cernic’s offers 58-pages of women-specific items, including boots and boot parts, gloves, riding jerseys and motocross socks. Customers who ride unusual or vintage machinery will also find some items to fit their needs. Air filters for a BSA? Check. Tappet adjuster for a Triumph? Check. Performance parts for a Can-Am Spyder? Check, also!

The website also features – in addition to the normal listings of new models and used vehicles – a long list of race team sponsors, notices of events and a link to Cernic’s Racing, which sells custom jerseys, graphics, pit boards and other items for the up-and-coming motocrosser. New bikes are shown with the MSRP listed on the website. 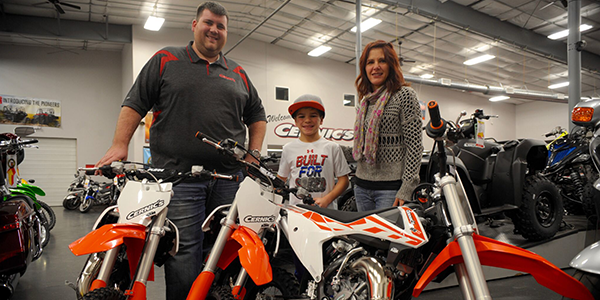 In addition to the shop website, Cernic’s maintains a steady flow of Twitter posts, including the opinions of Jeff Cernic about his beloved Steelers, shop specials and deals available at different race venues. The shop also maintains a presence on Facebook andInstagram, which is chock full of photos of happy people having fast fun in the dirt.

The shop throws two open houses a year, and hosts the Thunder Run, a streetbike event held during the Thunder in the Valley, a long weekend of motorcycle oriented events and entertainment that takes place every year in Johnstown. Cernic’s also puts on the Ride at the Rock, an ATV event at Rock Run ATV Park in central Pennsylvania.

All of these efforts at promotion bring in a steady stream of customers. Far from being one demographic, customers “are all over the board,” says Jason. The off-road riding family has room for everyone from small children to grizzled oldsters, and all ages and sizes of both men and women come to Cernic’s for parts and service.

The wide variety of vehicles and gear available at Cernic’s enables almost everyone who shows up to find a bike and gear that will work for them, and the service department specializes in setting up suspension and massaging engines for the riding ability and style of each customer.

Although Cernic’s does not run riding schools, the dealership works closely with the Milsaps Training Facility in Cairo, Georgia, a school for aspiring motocrossers. “We send a lot of people there,”
says Jason. 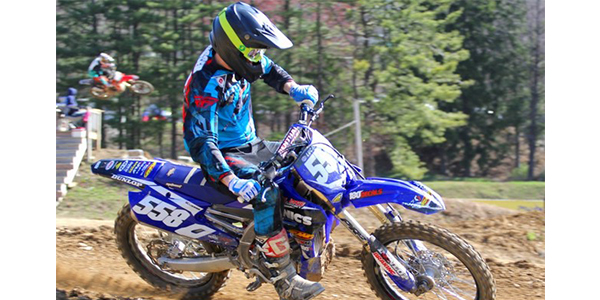 Cernic’s does not expect to make any serious changes in the foreseeable future. What the dealership is doing now works and works well. As Jason says, “Nothing is going to change. We will continue to grow.”