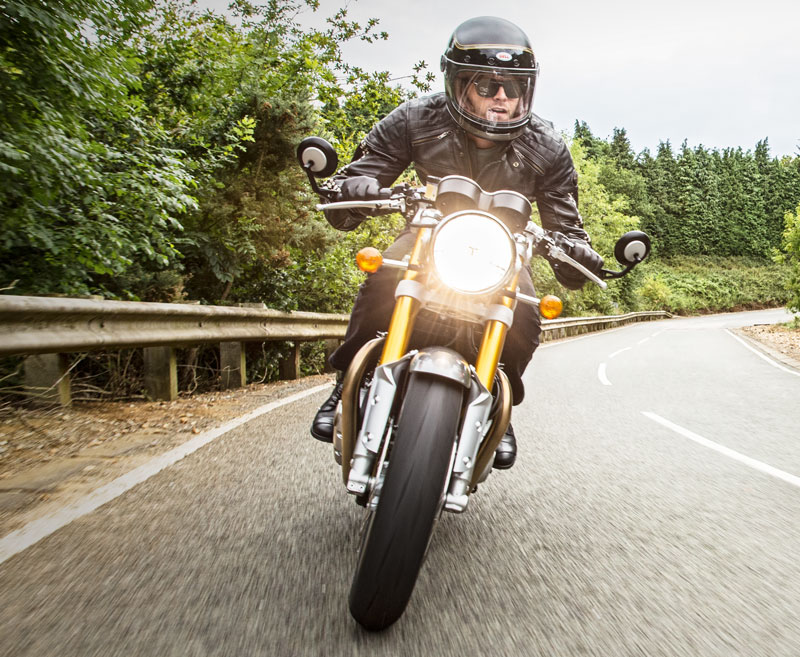 These folks are not an isolated phenomenon. Cafe racers are a worldwide trend. Today, cafe racers are being built from Ireland to Singapore by small shops and homebuilders. Streets in Los Angeles, London, Tokyo and Rio de Janeiro are home to loud exhausts, custom tanks, bikini fairings and accessory seats.

[dropcap]Y[/dropcap]ou see them zipping past your dealership on the way to the local hangout. They’re on old bikes customized with clipons, rearsets, stripped bodywork, wrapped pipes and illegal mufflers. Sometimes they come walking in, wearing secondhand leather jackets and scuffed boots, looking for oil and drive chains.

These folks are not an isolated phenomenon. Cafe racers are a worldwide trend, and they even have their own TV programs: Naked Speed, on the Velocity channel, and Cafe Racer TV. The Internet is littered with cafe racer websites, including Pipeburn.com, Bike.EXIF, Welovecaferacer.com and Motorivista.com. Today, cafe racers are being built from Ireland to Singapore by small shops and homebuilders. Streets in Los Angeles, London, Tokyo and Rio de Janeiro are home to loud exhausts, custom tanks, bikini fairings and accessory seats.

In case you just landed in your spaceship and don’t know what we are talking about, here is a definition from Wikipedia: A cafe racer is a lightweight, lightly powered motorcycle built for speed and handling rather than comfort — and optimized for quick rides over short distances. This style of motorcycle originated in England in the 1960s. Young factory workers congregated in roadside coffee shops, riding hopped up Nortons and Triumphs. Impromptu- and illegal races were a frequent source of amusement, with the “ton-up boys” roaring away at the drop of coins in the jukebox. Present-day cafe racers take their inspiration from these fast bikes, stripped of any extra weight and enhanced with performance upgrades.
Present-day cafe racers are typically based on older Japanese motorcycles (Honda CB350s and 450s are very popular) but are sometimes put together from single cylinder Ducatis or ’60s or ’70s Triumphs. Don Stockett, of Vintage Motorcycle Rescue, a restoration facility for classic Hondas, says, “Many cafe racer people want to ride vintage but have no money. Putting together a cafe racer gives you a chance to use your imagination and is a cheap way to get a bike on the road. There are a lot of suppliers, such as Sudco and EMGO. You can get used parts from eBay or Craigslist or a junkyard and make a bike over in your own style. You can buy a basket case, a pile of junk, and turn it into something that is different from what anybody else has.” 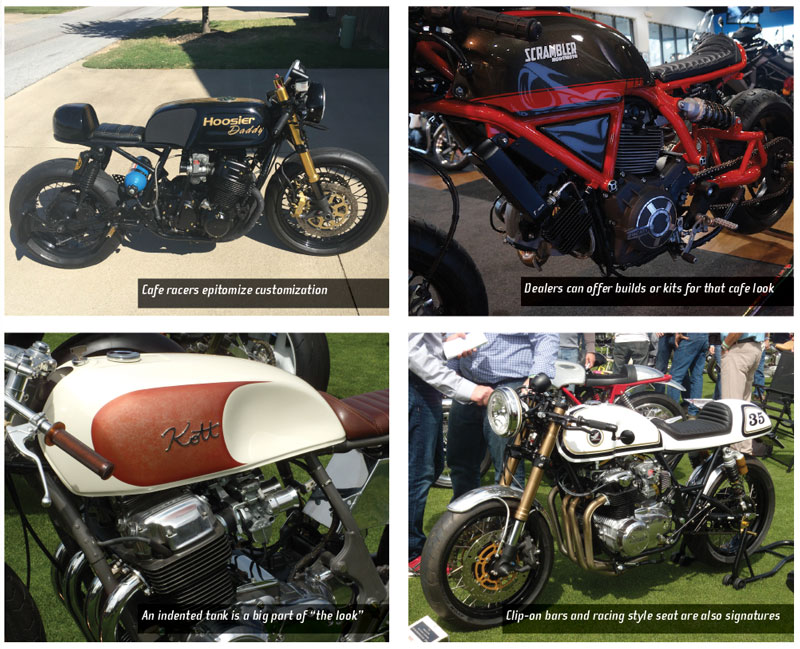 Who Are These ‘Cafe’ People, Anyway? 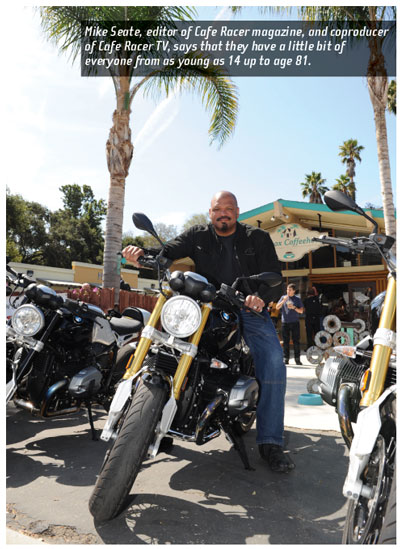 Many of us spent our younger years being a bad example on a motorcycle held together with duct tape and chewing gum. Some folks, however, have no intentions of growing up. Herm Narciso, cofounder and owner of Dime City Cycles, a retailer of parts for custom bikes, says that about two-thirds of his customers are around 40 years old. However, “There are lots of young people. They can buy a bike for a grand and spend $1,000 in parts. If they halfway know what they are doing, they can have an inspired one-of-a-kind machine.”

Not everyone into cafe racers is doing it on a budget, however. There are several shops building high-end cafe racers these days. One of the best-known is Union Motorcycles. Working out of a repurposed dairy barn in Nampa, Idaho, Mike Watanabe, the owner and designer, and mechanic Luke Ransom build Ducatis, Triumphs, classic Hondas and Yamahas into custom street racers that regularly find their way onto magazine covers. His customers are successful people in their early 40s, most of whom have more than one bike. Mike is a serious artist who aspires to design motorcycles to look like factory prototypes or factory racers. Union Motorcycle’s creations are intended to perform on twisty roads as well as stop passers by in their tracks. He says, “I am fascinated by history and race bikes. I want to do my version of what the factory engineer would have done.”

A surprising number of women are also involved in cafe racer culture. Not satisfied to admire the work of others, they are ordering parts from Dime City for their own do-it-yourself efforts. Herm explains, “Many women want to do their own wrenching these days. They tend to buy naked bikes and customize them to be their own.”

What Kind of Bikes Are They Attracted To?
The common denominator among cafe racer platforms is lightweight and low cost. Mike Seate says that some of the most popular bikes are smaller Japanese machines from the 1970s, Triumph Bonnevilles, both the classic Meriden bikes and the newer models from the Hinkley factory, and 1990 era Ducatis. The Sport Classic Ducatis didn’t sell in their day, but are now sought after as platforms for a cafe racer build. Cafe racers are not just constructed from old motorcycles. New bikes, such as the Ducati Scrambler, Yamaha SR400 and Bolt-C spec, and Royal Enfields, are also often used for cafe racers.

Terry Ward, Manager of Imagine! Vehicles International, another well-regarded custom motorcycle builder, points out that cafe racer style customs cannot be sold unless the performance is top notch. Cafe racers go, as well as show. They follow the maxim “Form follows function,” with the personalization impulse channeled through the primary need to have the bike go fast, handle and stop. This makes cafe racers different from many other custom bikes, whose main purpose is to look pretty at shows. Cafe racer owners want their bikes to run right. They need to have oil changed, regular tuneups and new tires. This makes cafe racers potentially good to have as customers. They tend to ride their bikes and want to keep them running.

How Do You Connect To These Folks?
Remember, a lot of your customers were once kids with no money. Many kids get jobs, acquire a credit rating, and start looking for a new bike. Don’t you want them to remember you as having encouraged them when they were young and poor?
Here are some ways you can make friends with the cafe racer crowd:

Get Them Parts
Herm of Dime City Cycles suggests that you special order parts for people with older bikes made by your OEM. All four Japanese manufacturers stock drivetrain parts for a wide variety of older models. Ask the customer to pay up front for the part – after all you are doing them a favor and no one else may want it if they don’t come and get it.

Ken Durr, District Manager at Yamaha USA, suggests that if your OEM doesn’t currently stock the part, you can provide a part number to the would-be customer. “As a dealer, you understand color codes. With a part number and a good Internet search, the customer can often find the part on eBay or elsewhere on the Net. It only takes a couple minutes and you have made a friend. That guy might decide he needs a new bike to ride while he is rebuilding the XS 650 or the XR500.”

Work On The Bike 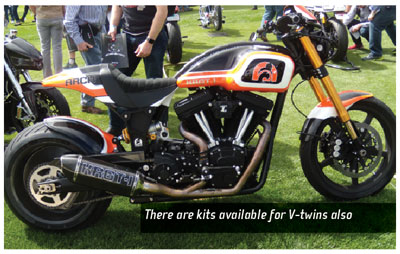 Chad Thompson of Sudco points out that you can help the customer pick out parts from aftermarket catalogs and afterwards install the parts on the bike if the customer’s wrenching skills are not up to the task. His cafe racer customers buy lighting, exhaust parts and the carburetors that are a Sudco specialty.

Thompson continues, “Not everybody out there is a super wrench who wants to fix it all themselves. You may be able to do the basics like tires or oil. Even better, if you have a mechanic that can do performance work, you should let customers know. Modern bikes have all the performance wrung out of them from the factory. It can be difficult to improve. Now talk about a bike designed in 1970, it’s very possible to get performance gains from a few changes.”

Throw A Party
Roland Sands, founder of Roland Sands Designs, says, “Create a draw through participating or helping start a scene where like-minded people can get together. There are hipsters everywhere who need an excuse to ride their bikes to the bar, coffee shop, or art show.” That show can be at your dealership.

Kevin Allen, public relations manager for Kawasaki Motors Corp., U.S.A. suggests starting by attending events in your area. “Go to where they are going. See what people in your area like. Talk to the organizers. Then, start putting on some events of your own. Coffee culture is very popular. Good coffee goes with vintage bikes and bicycling. Have a coffee morning with good coffee – not the stuff in a can – and pastries from a bakery. Your customers can come in for coffee and go off on a ride.”
Yamaha’s Ken Durr suggests throwing a bike night or a vintage night centered on your dealership. “These events are always popular. Another idea is to have a swap meet in your parking lot.” 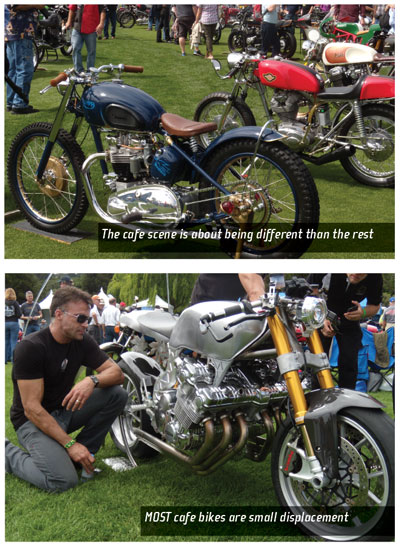 Did you take in a bike in trade that might be a good start for a cafe racer? Both Kevin Allen from Kawasaki and Ken Durr from Yamaha think that building your own custom is a great way to create interest in your operation. Announce you are going to make a cafe custom on your shop Facebook page. Document the build, post updates on a regular basis and state what accessories and parts you used to put the bike together. Describe what problems you encountered and how you overcame those problems. Once the bike is complete, take it to shows and on rides.

V-twin dealers can get in on the fun too. Roland Sands points out, “The H-D Sportster is a great platform for a café racer. We are making building your own easier with our Café Racer Kit for Sportsters. New or used, it’s a cool direction to take your bike and not have to spend a huge amount of money. A lot of the café guys are just getting started, and a Sportster is a good reliable bike to start with.”

Cafe Racers Are Not Going Away
Andy James, the lead fabricator for Revival Cycles, a well-known custom bike operation in Austin, Texas and originator of the Handbuilt Motorcycle Show, says that cafe racers are evolving, but are going to remain popular for a long time. “The bikes are now more flat track inspired. Although they appeal to people’s sense of style, function is an integral part of the trend.”

People have been customizing motorcycles for a very long time. Although different trends come and go, the urge to make a motorcycle uniquely yours has been a part of the scene from the beginning. A cafe racer-styled custom proves that a motorcycle can have both style at the drive-in and be fun on a mountain road. As Herm of Dime City says, “People have a vision of who they are. Dime City tries to get people to channel that vision down the path of reliability and performance.”

You can assist your customers to realize this primal urge to customize a motorcycle, have a lot of fun with the cafe racer concept and make money, too!

Advertisement
In this article:Cafe Racers

Cashing In On Cafe Racers