[dropcap]I[/dropcap]t all depends on who you ask… and in which state you ask the question of what the Polaris Slingshot is. While the answer is still a flat out “no” in Texas and Indiana, Polaris is calling the Slingshot a “motorcycle” despite the bucket seats and steering wheel rather than the typical motorcycle saddle and handlebars set up that most of us expect a motorcycle to have. 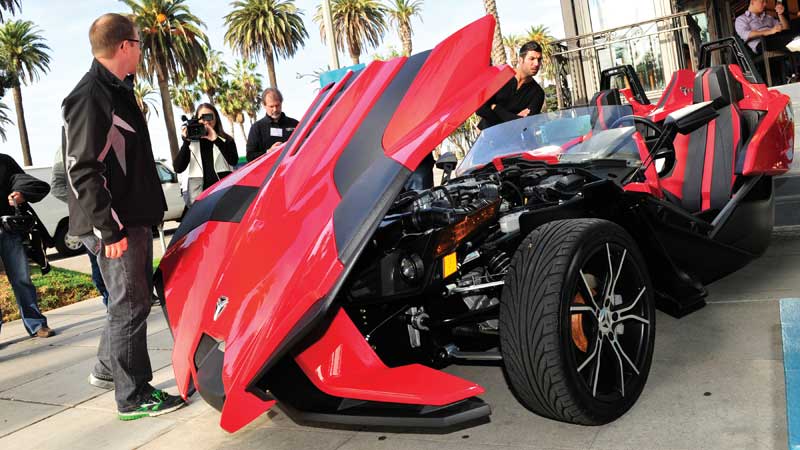 According to Polaris Industries’ own definition, “Slingshot is a three-wheeled motorcycle. It is not an automobile. It does not have airbags, and it does not meet automotive safety standards.” Polaris also partnered with Progressive to insure the Slingshot under the “Motorcycle/ATV” category – or more specifically, “3 Wheel Alternative Vehicle.” 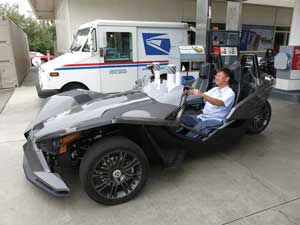 Connecticut DMV disagrees. “It is the consensus of the DMV that this vehicle closely resembles an automobile in appearance, and is equipped (brake, clutch, accelerator, steering wheel, four-cylinder engine, seat belt, gear shifter, etc.) and handles like an automobile rather than a motorcycle,” wrote Connecticut DMV senior attorney Sharon Geanuracos. But, CT’s DMV had been open to allowing powersport dealers to sell the vehicle once the technicalities were resolved until late December when it was officially declared as unlawful to be registered for street use. Meanwhile, the ban in Texas continues because the Texas Department of Public Safety defines a motorcycle as having “a saddle” instead of an automotive-style seat.

While some states are still squabbling about what it is not, we do know what the Slingshot is: A blast! At the press launch when MPN was given a chance to put the Polaris three-wheeler through its paces on Pacific Coast Highway and the hills above Malibu, we were told just to call it a “Roadster.” Despite the GM EcoTec 2.4 liter DOHC car engine and five-speed gearbox (with automotive-style reverse), we still had to wear motorcycle helmets because California DMV classifies the Slingshot as a motorcycle. With 173 horsepower on tap and a dry weight just north of 1,600 lbs., it certainly performs more like a motorcycle than the family mini van. 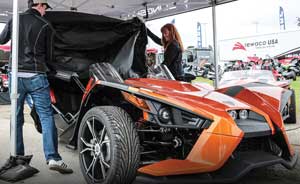 Polaris unveiled this Limited Edition version of the Slingshot SL during Bike Week in Daytona Beach.

Car or motorcycle, the Slingshot is a real attention getter! Even the normally blasé beautiful people on the beach where Bay Watch was filmed seemed to take note of it. Tourists stopped in traffic to take pictures of it. The postman at the gas station in Malibu didn’t believe us when we told him it was not a European supercar and the price was less than $20,000. He did offer to trade us straight up for his AM General postal delivery vehicle, though.

“The public response to Slingshot has been phenomenal and the head-turning exhilaration it delivers is in high demand,” said Slingshot VP Mike Jonikas during the Daytona debut. “We encourage you to see and experience it for yourself.”

In other words, try it, you might just like it … no matter whether you call it a motorcycle or automobile!

See more photos of our time with the Slingshot in our online version.

Car or Motorcycle? Either Way the Polaris Slingshot is on Target

AFT to Join NASCAR Cup Series in Charlotte
Connect with us