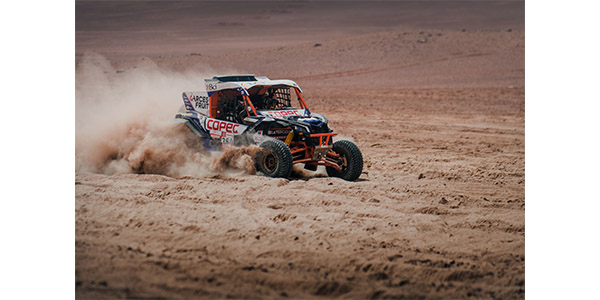 BRP’s Maverick X3 side-by-side vehicle has won the 41st edition of the Dakar Rally in South America for the second year in a row.

BRP’s Maverick X3 side-by-side vehicle has won the 41st edition of the Dakar Rally in South America for the second year in a row.

A popular choice for many racing teams, the Maverick X3 vehicle was dominant on the circuit, as nearly 80 percent of the vehicles racing in the SxS category were Maverick X3, proving Can-Am’s leadership in this category. Can-Am had more than 20 teams entered in the 2019 Dakar Rally, which lasted 11 days and featured a 5,000-kilometer course (around 3,100 miles) that started and ended in Lima, Peru.

“We congratulate the winners. This amazing victory and the fact that many racing teams decided to choose a Maverick X3 to conquer the world’s toughest and biggest rally shows how BRP and Can-Am’s unrelenting focus on innovation produces best-in-class products,” said Olivier Camus, global marketing director, Can-Am Off-road. “For us, racing is an exciting testing ground to create the best possible experience for our consumers.”

Since its introduction in August 2016, the Can-Am Maverick X3 vehicle has chalked up a lot of victories on the racing circuit, winning four major championships in North America as well as several races elsewhere in the world, such as the 2018 Dakar Rally.

“To have the Can-Am Maverick X3 vehicle win the side-by-side class twice in a row in Dakar, the world’s most difficult race, is outstanding,” Camus said. “It’s a clear demonstration that we have an industry-leading platform that will allow consumers and racers alike conquer the most challenging terrain imaginable. Congratulations to all the riders and thanks for choosing the Can-Am Maverick X3.”