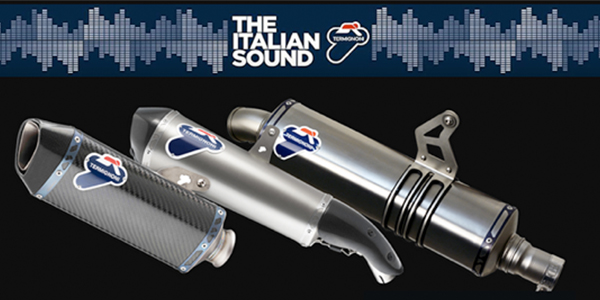 Brock’s Performance announced that it has secured the exclusive rights to distribute Italian exhaust specialist Termignoni’s lineup of street, dirt and racing products in America.

Brock’s Performance announced that it has secured the exclusive rights to distribute Italian exhaust specialist Termignoni’s lineup of street, dirt and racing products in America.

More than 300 slip-on exhausts and full systems for 70 bikes from 16 top brands in every genre — sportbikes to cruisers and scooters; ADV machines to motocrossers and trials bikes — starting at just $430, are now in stock and currently shipping from the Dayton, OH based company’s 11,000 square-foot distribution center.

Founded by Luigi Termignoni in 1969, the legendary European brand’s trajectory of success includes 18 World Superbike titles, initially with Honda-mounted American Fred Merkel in 1988 and ’89. Frenchman Raymond Roche started Ducati and Termignoni’s winning run of 16 more together with eight other champions.

Since the dawn of MotoGP’s four-stroke era, Termignoni has partnered with Honda and Yamaha to net 11 world championships. Valentino Rossi scored the company’s first grand prix title in 2004, while his current nemesis, Marc Marquez, won their latest.

Between these triumphs at road racing’s pinnacles were world championships in motocross, enduro and trials competition, in addition to national titles and wins in the Dakar Rally.

While Termignoni has been a fixture atop race podiums around the world for more than 30 years, its presence in the U.S. hasn’t been as consistent.

Thankfully, Brock’s Performance, like Termignoni — literally — has a track record of success. Similarly, Brock’s evolved from one man’s vision. With the skills of an engineer and passion of a racer, he built, tuned and rode his bikes to race wins and records, then championships. Soon, others wanted what he had and a business was born. Today, it distributes products from multiple foreign brands, sells thousands of Brock’s Performance-designed products, and many from other manufacturers.

Brock’s also helped BST develop new sportbike products and do business in the burgeoning Harley-Davidson and V-Twin market. As a direct result of these efforts, BST sales are stronger today than during the industry’s boom years before the Great Recession.

All of this captured Termignoni’s attention.

“We would like to be a solid reality in America,” said Termignoni CEO, Michele Burnengo. “In advance of our 50th anniversary, we set out on an eight-month journey to select the most qualified distributor in the U.S. to professionally market and distribute the Termignoni brand. We analyzed business plans, distribution centers, location, corporate culture, IT infrastructure and the ability to be a catalyst for growth. We found some competitive choices and have selected Brock’s Performance to be the U.S. territory distributor for our exclusive, Italian aftermarket brand.”