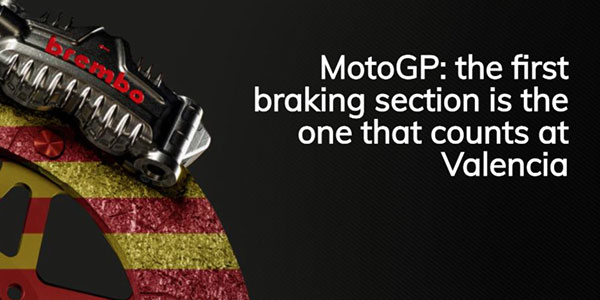 Unlike last year, the Gran Premio de la Comunitat Valenciana is once again the event that brings the MotoGP season to a close. According to the Brembo technicians who work closely with all the MotoGP World Championship riders, the Circuit Ricardo Tormo is a moderately demanding circuit for brakes.

On a difficulty index scale of one to five, it earned a three, the lowest of the four Spanish tracks. It will be a historic race, because it will mark the end of Valentino Rossi’s amazing career. Rossi has been using Brembo brake systems from the very outset of the MotoGP World Championship and has also been using Marchesini wheels for many years. ​

Marchesini, the choice for anyone who demands the very best​

​​Marchesini has been part of the Brembo Group since March 2000 and shares the same production plant. Once again, in the 2021 season, Marchesini-forged magnesium wheels will appear on almost two thirds of the bikes competing in MotoGP, with five-spoke and seven-spoke Y design wheels at the front and seven-spoke wheels at the rear.

These wheels are crafted by 3-D, closed-die multi-forging and heat treatment and provide maximum rigidity and minimum inertia. The weight saving ensured by Marchesini wheels (which, together with the tires, are the most significant non-suspended rotating mass) boosts the motorcycle’s acceleration and handling during changes of direction as well as enhances brake response.

Lightness and performance for road bikes too ​

Marchesini not only gives professional riders an exhilarating experience but develops solutions that guarantee high performance for road motorcycle users too. With their unique style, they are made using cutting-edge design, structural analysis and testing methods.

The M7R Genesi wheels have seven spokes made of a magnesium alloy generally used in the aerospace industry with multi-directional forging and dies optimized for final wheel geometry. They are 26 to 41% lighter than standard wheels, depending on the motorcycle model. ​

Find out more about Marchesini wheels.

The 31 seconds that make all the difference​​

The MotoGP riders use their brakes on nine of the 14 turns on the Circuit Ricardo Tormo. The only two consecutive turns where they are not needed are no. 9 and 10. The brakes are used for 31 seconds on each lap, 34% of the entire Grand Prix, which is the same percentage as the Spanish GP held at the Circuito de Jerez.

Summing up all the force that a rider applies to the brake lever from the starting line to the checkered flag, the result comes to just over 900 kilograms (0.99 tons) on average. However, the load is not uniform, because it is less than 2.5 kilograms (4.4 pounds) on a couple of corners and just over 5 kilograms (11 pounds) on another two. The decelerations, on the other hand, are all between 0.8 grams and 1.2 grams with the exception of one. ​

Of the nine braking sections on the Circuit Ricardo Tormo, only one is classified as demanding on the brakes, five are of average difficulty and the remaining three are not particularly challenging.