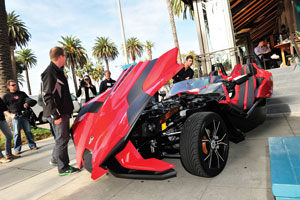 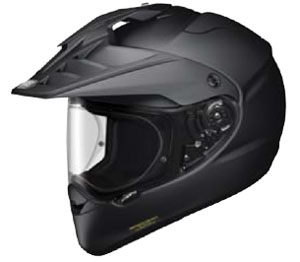 A couple days before the North American premier of Shoei’s newest helmet at the International Motorcycle Show in Washington, DC, a “top-secret” pre-launch press event was held in the wilds of Southern California… literally.

The X2 is a true hybrid of on- and off-road helmets… with an obvious bias toward the street. Bottom line: if your customers liked the original DS, they should love the X2! 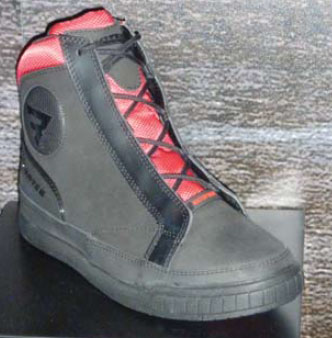 SHOT Show in the Crosshairs for Powersports?
(February issue, page 48)

What SEMA is to the auto industry or AIMExpo is becoming for the powersports industry, the SHOT Show is for the firearms and hunting industry.

Hidden amongst the camo gear, ammunition and weaponry was a fair amount of crossover with the powersports industry. MPN crashed the hunting and killing crowd’s party for a reason.

Bates, a division of Wolverine World Wide, is getting ready to dip a toe into the motorcycle market and the company wanted feedback from editorial types and powersports industry leaders.

Bates has the DOD contract to supply the U.S. military with footwear. Bates created a line of footwear based on the fit and feel of its combat boots, but with motorcycle specific upgrades.

Although they were still about six months away from releasing product, the prototypes in Vegas clearly demonstrated that 130+ years of making military-spec footwear is a good stepping stone to motorcycle footwear.

Car or Motorcycle? Either Way the Polaris Slingshot is on Target
(March issue, page 56)

It all depends on who you ask… and in which state you ask the question of what the Polaris Slingshot is.

According to Polaris Industries’ own definition, “Slingshot is a three-wheeled motorcycle. It is not an automobile. It does not have airbags, and it does not meet automotive safety standards.”

While some states are still squabbling about what it is not, we do know what the Slingshot is: A blast! At the press launch when MPN was given a chance to put the Polaris three-wheeler through its paces on Pacific Coast Highway and the hills above Malibu, we were told just to call it a “Roadster.”

Car or motorcycle, the Slingshot is a real attention getter! 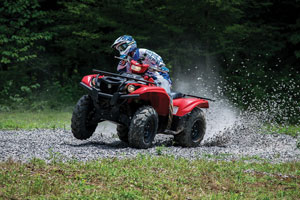 Yamaha has been very busy this year as the company has rolled out a number of new models to commemorate its 60th anniversary. Lucky for us, we’ve gotten a front row seat for several of the new model launches including the 2016 Grizzly and Kodiak ATVs, as well as the new two-stroke 250X.

The Kodiak and Grizzly are both beefed up with steel racks for added strength, and the front end has blow-molded bumpers so you can push open gates if necessary. A new 708 cc engine comes in both vehicles, although the Kodiak clutch engagement is tuned differently than the

Grizzly for more of the day-to-day duties that it is likely to perform on a farm. The Grizzly throttle response and clutching is much more aggressively tuned.

With the two models, Yamaha has addressed the core of the market from recreational to working farmers and ranchers, and they don’t have to compromise with a one-model-for-all type of ATV. 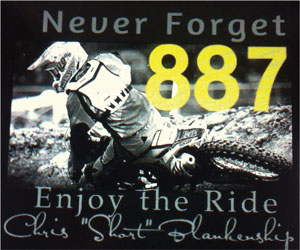 Although August marked the 1-year anniversary of Chris Blankenship’s passing, his memory rides on! From local kids tuning up for Loretta Lynns to top-level pros like his buddy Kevin Windham, Chris “Short” Blankenship touched many in the motocross community before his untimely passing in a racing accident at age 38.

Now the motocross community is stepping up for Short through organized fundraisers or events to commemorate his life and help his family.