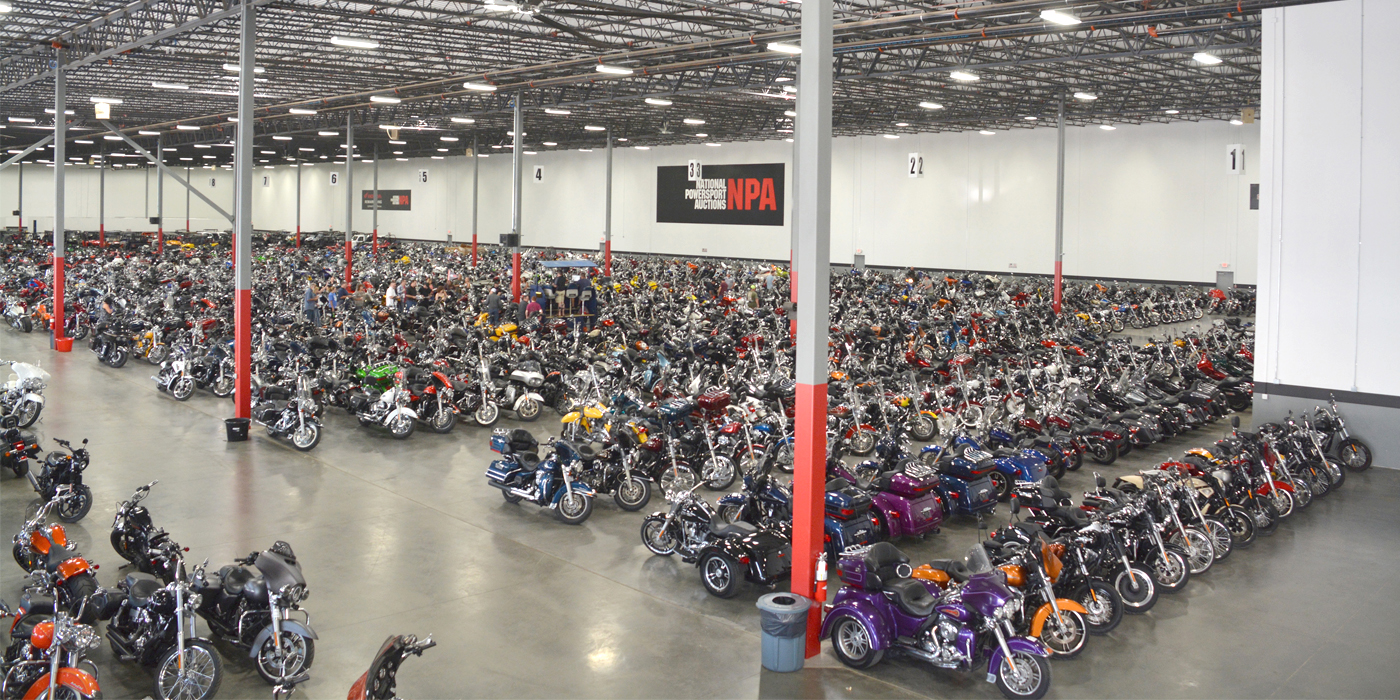 While dealers can choose which auction works best for their situation and location, some attend multiple live auctions during the year to keep up with demands for pre-owned. Dealers may also attend the closest live auction but buy from several locations online.

Most of us think of auctions as something from another time. Roman Emperor Marcus Aurelius sold his family furniture at auction to pay off his debts.

The “Magister Auctionarium” drove a spear into the ground to start the sale, according to the National Auctioneers Association. Auction houses have been around for 2,000 years and are one of the oldest forms of commerce. But how can they help a powersports dealer in the 21st century?

If pre-owned were a brand like Honda, Yamaha or Harley, it would be No. 1 in sales every year. Dealers that don’t pay as much attention to their pre-owned inventory as they do their new machines are potentially leaving money on the table.

We spoke to several auction companies in the powersports space to find out what the best options are for dealers today. With the pre-owned segment on a roll, dealers are now more than ever in need of help to acquire quality pre-owned inventory and to move out old stock.

“We’ve seen an increase in participation at our auction venues this month,” said Jim Woodruff, chief executive officer of National Powersport Auctions, who spoke to us while at their Dallas auction. “Our Dallas facility is not up quite as much, but everybody’s happy. Dealers’ appetites are coming back here in the South, so it has been good and running as we expected at this point in the year.”

Woodruff noted in his Pre-Owned Monthly Recap column last month that the seasonal price-to-book ratios (AWP vs. NADA Clean Wholesale) remained stable for domestic and metric cruisers in December. However, sport and dual sport vehicles rose from a rather sluggish November. He also noted that the off-road categories were slightly under the December 2018 marks, except for MX units, which jumped nearly 10% compared to last November.

Looking at December’s pre-owned results, Woodruff stated that the 2020 market is off to a great start. Part of the positive momentum can be attributed to the recent expansions that NPA has been undergoing with several of their regional facilities like Dallas, Philadelphia, Atlanta and Cincinnati.

“We opened Philly and moved Dallas into a larger facility at basically the same time in 2017,” Woodruff said. “We then moved Philly a year later into a building that was about four-times larger.” He also said that their Cincinnati location expanded in January. In the last year and half, NPA opened two more live auction locations in Madison, WI, and Sacramento, CA.

While dealers can choose which auction works best for their situation and location, some attend multiple live auctions during the year to keep up with demands for pre-owned. Dealers may also attend the closest live auction but buy from several locations online.

“The smaller volume dealers generally can get what they need at their local friendly NPA auction,” Woodruff wryly acknowledged. “But there are others that need more inventory than they can get at one sale a month. These dealers tend to buy from two to five locations. It depends on what they need.”

Fortunately, there are plenty of options for dealers in the auction space, from buying units with slight damage at a significant discount to units that are turn-key and ready to sell. And the online features offered by most auction companies make managing your pre-owned inventory much more convenient than ever with mobile apps being rolled out.

Woodruff said that dealers can spread out their pre-owned net by purchasing via Simulcast from their next closest auction location. NPA has also introduced a second auction a month in two of its primary locations.

“We’ve got seven locations total where we do live auctions, but we’re doing nine live auctions because Dallas and Atlanta are now twice a month, which is working out great. It allows dealers that need more frequent opportunities to liquidate inventory or purchase every two weeks instead of waiting 30 days. It’s a lot more efficient for everybody.”

In 2019, the pre-owned segment was good for most dealers, according to Woodruff’s data. “There were some pockets in the country where regional economies were a little more challenging than others. But pre-owned is still the first choice that a consumer is going to make in a tough economic environment. And everything we’re seeing points to 2020 being an even better year on the pre-owned side. I think people are also optimistic about the new side despite the uncertainty of an election year.”

Both live and online platforms are continuing to grow because dealers have found that it is the simplest, safest way to manage their inventory. “We know dealers are extremely busy, and our goal is always to make buying from NPA easier this year than last year,” Woodruff explained. “Over the last couple of years, we have invested in additional facilities in strategic locations and purchased additional semi-trucks to run inventory between facilities, decreasing transportation costs and speeding up delivery times. These additions been very successful and made it easier for dealers to participate online as well as in person.”

Jane Morgan, president of ADESA’s Specialty and Off-Site Solutions, said that all of their powersports (Specialty) auctions have live and online attendees. “The ratio of attending online versus in-lane is about 1.5 to 1. However, in Specialty, we have more customers attending online than
in person.”

Morgan pointed out that in their powerports auctions, the units may not be at the host auction. However, she said the units are at one of their physical locations. “If the units are being sold through one of our UVA (virtual) auctions, they are at various seller locations. Those units are not picked up and moved unless sold. We can pick up the units, arrange pickup or the seller may deliver them — it’s up to the seller.”

Morgan said that their online auctions have been a hit for dealers and buyers because they have a good supply of inventory throughout the country. “There are only so many hours in the day, and with online auctions, you can buy at multiple locations at the same time. Time is money, after all.”

Other auction options that may interest some dealers are units recovered from a theft or accident. Dealers willing to put in the work to repair these bikes can make a nice profit for their efforts.

Gary Pollard, Rec Rides branch manager of IAA said their powersports auctions (Rec Rides) includes motorcycles, ATVs, SxSs, PWCs and snowmobiles that are sold during a set online-exclusive auction twice a week. “Buyers can preview inventory 24/7 on desktop or mobile and via our IAA Buyer App, which puts the power of the auction in your hand. Buyers can find in-depth details on the vehicles up for auction including up to 320 additional VIN details, sale document information and condition details directly from our website. We also have a 360 view on a select number of powersports units, which offers an interactive, 360° visual of a vehicle’s interior and exterior.”

While online auctions are admittedly outpacing in-person sales, they are complementing each other’s strengths. Online participants enhance the live auction because the auction houses are moving more bikes, which means more opportunities for dealers whether you attend live or online.

The best way to get started is to register and visit a live auction. There are also some online tutorials if you are really unsure of the process. If you are near a physical auction, you should ask for a walk through on a non-sale day and ask for an online demo as well. Every auction company should be able to do that.

Most dealers are very familiar with the seasonality of their inventory and what units sell best at certain times, and the prices are reflected at the auctions. Woodruff said prices usually rise in the spring and decline in the fall/winter for all categories of powersports. “Dealers can use this to their advantage when stocking their inventory.”

Spring is when the season kicks into high gear for every category, as riders begin dusting off their bikes. Our pre-owned experts say that this is why dealers need to plan ahead and have inventory ready for what is most likely your busiest time of year. Don’t wait until the Magister Auctionarium drives a spear into the ground to get started.