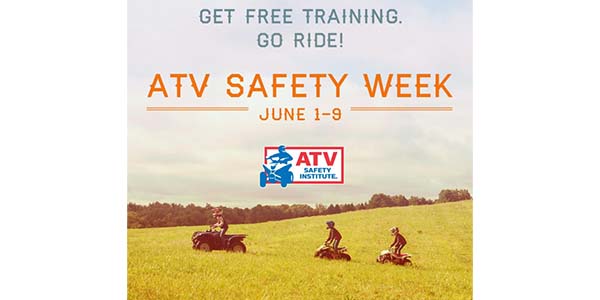 The ATV Safety Institute is inviting adults, youth and families to sign up for free hands-on training from a licensed instructor during ASI’s sixth annual ATV Safety Week, June 1-9, at locations across America.

The ATV Safety Institute is inviting adults, youth and families to sign up for free hands-on training from a licensed instructor during ASI’s sixth annual ATV Safety Week, June 1-9, at locations across America.

“Everyone’s first ride should be at an ASI ATV RiderCourse,” said Erik Pritchard, president of the ATV Safety Institute. “We invite everyone with an ATV to take the first step toward safe ATV riding by enrolling in the ATV RiderCourse, even if an enthusiast has been riding for years but has never had formal training. Riders will learn about safe operation, protective gear, and ways to make smart choices and reduce risk.”

“Come out to a local range, meet the instructors, have some fun, and learn,” Pritchard said.

The ATV RiderCourse is also free year-round to purchasers of a qualifying ATV.  In addition, the ASI encourages everyone to take its free E-Courses, available online 24/7, for children and adults.

The ATV Safety Institute’s Golden Rules:
1. Always wear a DOT-compliant helmet, goggles, long sleeves, long pants, over-the-ankle boots, and gloves.
2. Never ride on paved roads except to cross when done safely and permitted by law – another vehicle could hit you. ATVs are designed to be operated off-highway.
3. Never ride under the influence of alcohol or drugs.
4. Never carry a passenger on a single-rider ATV, and no more than one passenger on an ATV specifically designed for two people.
5. Ride an ATV that’s right for your age.
6. Supervise riders younger than 16; ATVs are not toys.
7. Ride only on designated trails and at a safe speed.
8. Take a hands-on ATV RiderCourse and the free online E-Course.