Arctic Cat showcased an unexpected ROV dubbed “Wildcat” during the close of their 2012 snowmobile dealer show in Nashville, Tenn. 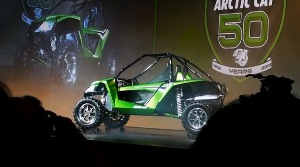 Arctic Cat showcased an unexpected ROV dubbed “Wildcat” during the close of their 2012 snowmobile dealer show in Nashville, Tenn.

With 2012 marking the brand’s 50th Anniversary, the bold, off-road styling cues of the Wildcat’s bodywork coupled with its aggressive sport stance and interior suggest Arctic Cat will move forward with its new pure sport ROV concept.

“This is the Year of the Cat! It’s also the Year of Excitement,” Claude Jordan, CEO, told dealers in attendance. “Inspired by race-bred and race-proven designs, we are committed to giving our customers the highest-performance models they deserve in the snow and off-road categories, as well as future endeavors.”

Very few details were released regarding the Wildcat, but Jordan noted, “An extremely capable suspension is what all pure sport ROV owners are begging for, and we promise this will be an industry leader.” When asked about production dates, Jordan hinted, “You may see this in dealer showrooms during our 2012 fiscal year which would end next March.”