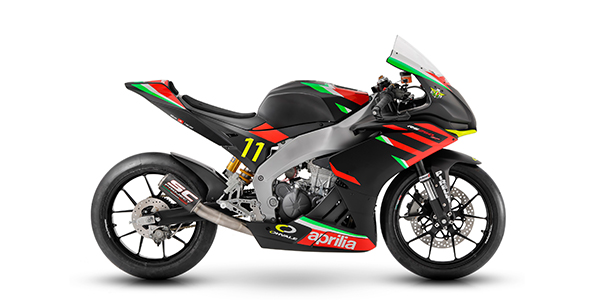 A true national championship reminiscent of a unique history where the bikes from Noale accompanied entire generations of young people on the track and launched them in the practice of competitive motorcycling.

Introducing in 2020 the Italian FMI Aprilia Sport Production Championship. A true national championship reminiscent of a unique history where the bikes from Noale accompanied entire generations of young people on the track and launched them in the practice of competitive motorcycling.

With its 54 world titles, Aprilia has become a true school of champions. Some of the biggest talents in modern motorcycling got their start and learned to win races and world titles with Aprilia: Max Biaggi, Loris Capirossi, Valentino Rossi, Casey Stoner, Marco Melandri, Jorge Lorenzo, Marco Simoncelli and Manuel Poggiali, not to mention Roberto Locatelli, Tetsuya Harada, Alessandro Gramigni and Kazuto Sakata. And many of these, including Biaggi, Capirossi and Rossi, began precisely with the Sport Production bikes, a category and bike designed to give very young enthusiasts their start in speed competitions.

The new Italian FMI Aprilia Sport Production Championship is born out of an idea conceived by Aprilia Racing and Federazione Motociclistica Italiana (Italian Motorcycling Federation) with the goal of launching young guys and girls, starting from eleven years old, in track racing and increasing the movement that fuels the growth of Italian motorcycling, grooming new talent that can carry on an extraordinary tradition. This is the commitment of Federazione Motociclistica Italiana that passionately follows a segment dedicated to young people who start from minibikes and go all the way to the National Speed Championship. It is a programme that is taking the Italian school back to the top, as testified by the presence of so many promising young Italians in the three classes of the Grand Prix Motorcycle Racing Championship. In fact, it is not by chance that the Italian FMI Aprilia Sport Production Championship will become part of a sports growth and promotion project managed by Aprilia Racing which is the first step in every professional career.

The first edition, inserted in the Campionato Italiano Velocità – CIV Junior 2020 schedule, will be conducted on a six-race calendar. Young riders, starting from eleven years old, will take to the track astride the Aprilia RS 250 SP, a bike expressly designed and developed by Aprilia Racing in collaboration with Ohvale for use on the track and to make the growth of this young talent easy and gradual.

Giovanni Copioli, FMI president said, “After the outstanding work done together with the Piaggio Group on the Moto Guzzi Fast Endurance Trophy, it is with great satisfaction that we announce the birth of the Italian FMI Aprilia Sport Production Championship next year, created in collaboration with Aprilia Racing. Together with the Noale-based manufacturer, which has always been committed to introducing and grooming the best Italian talent, we will be launching this new championship within the CIV Junior programme. For years, we have been seeking to improve the growth path for young talent and this will certainly be another training centre for future champions.”

Massimo Rivola, Aprilia Racing CEO said, “The new championship takes up a tradition that makes Aprilia unique, a brand that has taken generations of young people onto the track and that has raised up great champions. From 2020, thanks to the partnership with the Federation, we will once again be providing fun for young people who, in this championship, will find a way to make their dreams come true and perhaps, this is our wish, the start of a path in the world of competitive motorcycling. This is why we have designed an easy bike and formula that will attract the highest number of young people to competitive motorcycling.”

The Aprilia RS 250 SP, that exploits all the know-how and technology of the Noale Racing Department, will feature the best racing components (Brembo, Öhlins, SC Project) in the search for the best weight/power ratio, weighing in at 35 Kg less than the RS 125 street model. It will mount Pirelli-shod Marchesini 17-in. wheel rims. Such a high level of technical features and components will be an integral part of the technical regulations, to take all the bikes to their maximum performance so that it will be the riders with their talent that shines through and not the different preparation of the vehicles being raced.

Produced by technical partner Ohvale – a Veneto-based leader in the small motorcycle market – the target price of the Aprilia RS 250 SP is very competitive, under €10,000, precisely because one of the most important objectives of the FMI Aprilia Sport Production Championship is to make motorcycle racing accessible to range of enthusiasts that is as vast as possible.