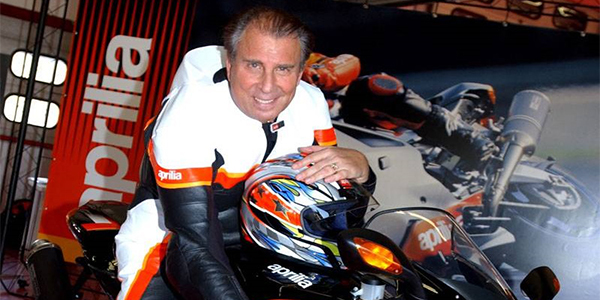 Ivano Beggio, who founded Aprilia, passed away Tuesday night, according to reports. He was 73. Beggio began working for his father’s bicycle manufacturing company and created Aprilia out of the shop in 1975.

Ivano Beggio, who founded Aprilia, passed away Tuesday night, according to reports. He was 73. Beggio began working for his father’s bicycle manufacturing company and created Aprilia out of the shop in 1975.

Aprilia enjoyed many successes in Grand Prix motorcycle racing in the ’80s and ’90s. The company dominated the smaller 125cc and 250cc classes, winning a total of 294 Grands Prix and 54 world titles, including seven in world superbikes.

Former Aprilia rider Max Biaggi paid tribute to Beggio in an Ultimate Motorcycling report: “Ivano Beggio was part of my life as an athlete – a sort of father in racing to me. He gave me his trust and a competitive bike when, after winning the European championship, also on Aprilia, I was little more than a boy. His was a brave choice, but also intelligent. And these are the two aspects that I remember most clearly about Ivano Beggio – knowing how to place a lot of passion at the service of his skills in order to always find the strength and energy for an extra step. This was also instrumental in achieving my many wins with Aprilia.”

Chairman and CEO of the Piaggio Group, Roberto Colaninno, current owners of the Aprilia brand, said: “Ivano Beggio succeeded in combining the skills and courage of an entrepreneur with creativity and a genuine passion for motorcycles. He was a visionary ahead of his time and the extraordinary combination of these factors allowed him to create, practically from nothing, one of the most brilliant stories in the Italian motorcycle industry, making a dream come true. Continuing to race and improve the Aprilia brand around the world is the best way to honor his memory.”