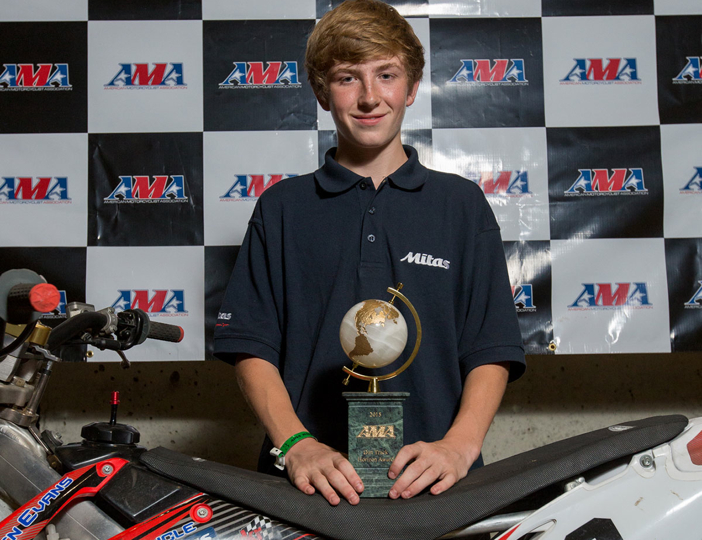 Applications for the 2016 AMA Fast Brain Award and AMA Dirt Track Horizon Award, to be presented July 6 at the 2016 Suzuki AMA Dirt Track Grand Championship in Du Quoin, Ill., are available at www.americanmotorcyclist.com > National Championships > Suzuki Dirt Track Grand Championship.
Funded by AMA Motorcycle Hall of Famer Bill Werner, Zanotti Racing’s Dave Zanotti and AMA Life Member Stan Simpson, the AMA Fast Brain Award includes a $1,500 educational scholarship that benefits one young racer whose talent with the throttle is matched by aptitude in the classroom.
“It’s always a pleasure to reward a young racer for academic achievement, in addition to racing success,” said AMA Track Racing Manager Ken Saillant. “And it’s greatly appreciated when sponsors return year after year to support our AMA dirt track racers. Bill, Dave and Stan are not only advocates of the sport, but supporters of the next generation of racers.”
Additionally, racers compete for the AMA Dirt Track Horizon Award, which honors an amateur racer poised for success at the professional level. The AMA Horizon Award application is available on the same webpage.
Illustrating the family-friendly nature of the 2016 Suzuki AMA Dirt Track Grand Championship, a rider appreciation cookout will be held on July 4. Evans Coolant is sponsoring the cookout.
“We appreciate that Evans Coolant wants to reward our hardworking dirt track racers with a dinner and the opportunity to gather as a community to share stories and enjoy the camaraderie our sport offers,” Saillant said.
The Suzuki AMA Dirt Track Grand Championship event schedule includes:
Online entry for the Suzuki AMA Dirt Track Grand Championship is now open at www.americanmotorcyclist.com and closes June 26. Online entry is $70 per class/per event. Onsite registration is $80 per class/per event.
AMA National No. 1 plates are awarded to the racers in each class who have the highest point totals across the four disciplines of dirt track racing. Awards are also given for the AMA Youth Dirt Track Racer of the Year and the AMA Vet/Senior Dirt Track Racer of the Year.
Competitors at the Suzuki AMA Dirt Track Grand Championship ride traditional dirt track motorcycles and DTX motorcycles, which begin as stock motocross bikes that are fitted with dirt track tires, suspension and other modifications.
Daily pit passes are $15 for racers of all ages. Spectator pit passes for those 13 and older are $15. Spectators ages 12 and younger are $10. Ages 3 and younger are free.
Full-week pit pass packages can be purchased June 30 through July 1. They are $50 for all racers and spectators ages 13 and older. Youth spectators ages 4 to 12 are $25 each.
For more information: www.americanmotorcyclist.com/racing/nationalchampionships/dirttrackgrandchampionship.aspx.
Advertisement
Click Here to Read More
Advertisement
Advertisement
In this article:AMA, AMA Dirt Track Horizon Award, AMA Fast Brain Award