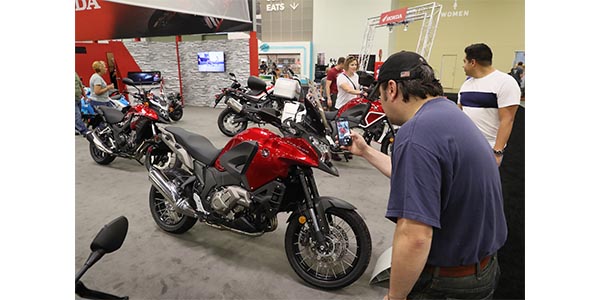 The renowned manufacturer will showcase its diverse lineup of motorcycles, ATVs and side-by-sides inside Las Vegas’ Mandalay Bay Convention Center.

The American International Motorcycle Expo presented by Nationwide announced that American Honda Motor Corp., Inc. has renewed its commitment to North America’s premier powersports show. The renowned manufacturer will showcase its diverse lineup of motorcycles, ATVs and side-by-sides inside Las Vegas’ Mandalay Bay Convention Center on Oct. 11-14, with a significant presence both on the show floor and at AIMExpo Outdoors! Additionally, Honda will host multiple opportunities centered on dealer engagement throughout Powersports Industry Week.

Honda will enter its fourth year as an OEM exhibitor at AIMExpo presented by Nationwide, and once again the brand’s entire product line of two and four-wheel vehicles will serve as the centerpiece of its participation. Notably, Honda will put the spotlight on its CRF performance line of off-road motorcycles, highlighted by the new CRF450L dual-sport model. Additionally, the hugely popular CRF1000L2 Africa Twin Adventure Sports, along with the CB1000R neo-sport cafe racer and all-new Gold Wing tourer, are sure to be popular products that will draw a lot of attention.

Perhaps most important to American Honda’s efforts in Las Vegas will be its dealer engagement. As part of the inaugural Powersports Industry Week, Honda will host dealer experience events on Tuesday, Oct. 9, and Wednesday, Oct. 10, which is open to all Honda dealers across the country. Honda dealers will receive a special invitation with additional details in the coming weeks.

Once AIMExpo presented by Nationwide gets underway on Thursday, Oct. 11, Honda will host its dealers in a special lounge near their display on the show floor. This exclusive area will provide a place for dealers to relax and connect with the American Honda management team about the latest products and programs to benefit their business.

“Our commitment to AIMExpo will enter its fourth year this October, and we’re eager to commemorate the show’s move to the west coast in an exciting town like Las Vegas by really enhancing our dealer engagement,” said Keith Dowdle, manager of experiential marketing at American Honda. “It’s important for us to take advantage of the all-inclusive platform provided by AIMExpo, and with a setting like this at Powersports Industry Week it’s an ideal opportunity to interact with our expansive dealer network with some special events, in addition to showcasing our newest models with the media and consumers.”

Honda’s expansive exhibitor display on the showfloor will offer attendees the opportunity to get an up-close look at the array of powersports vehicles the OEM has to offer. Additionally, attendees can also take advantage of putting select new models to the test at AIMExpo Outdoors!, including Honda’s luxurious Gold Wing, which it affectionately calls the “King of Motorcycles.”

“American Honda’s continued investment in AIMExpo presented by Nationwide is a testament to the value of the show’s platform for the industry, providing the best and only opportunity to bring dealers, media and consumers all under one roof at one time,” said Mike Webster, senior vice president, MIC Events. “Powersports retailers are at the forefront of the show and our recently announced Dealer Summit activities during trade-only days recognizes the critical role they serve in the continued health of the powersports marketplace. Honda recognizes that and is making a vested effort in providing a valuable and potentially profitable experience for its dealers, and we look forward to welcoming them to Las Vegas.”