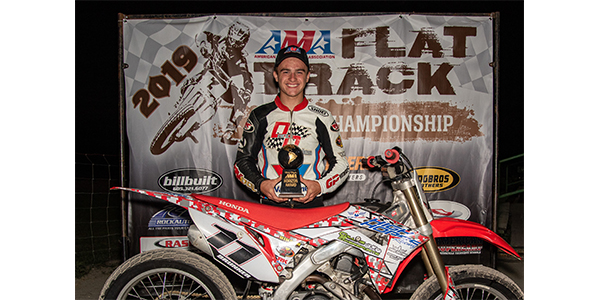 The Vet/Senior Flat Track Racer of the Year Award went to Rob Williams, of Holly, MI, who took home top honors in the 50+ Super Senior Class.

Ryder Reese, of Elmira, NY, won the AMA Fast Brain Award, a $1,500 educational scholarship that benefits a young racer whose talent with the throttle is matched by aptitude in the classroom.

The riders received their awards at the conclusion of the 2019 AMA Flat Track Grand Championship at the Triangle Motorcycle Club in Harpster, OH. The amateur national flat track championship event featured four days of competition with more than 800 entries in three formats of flat track racing.

The annual grand championship took place at the Ashland County Fairgrounds in Ashland, OH, on July 23 and at the Triangle Motorcycle Club on July 24-26.

“Both Trevor and Ryder put in outstanding performances during this year’s AMA Flat Track Grand Championship,” AMA Track Racing Manager Ken Saillant said. “They demonstrated great determination and sportsmanship during the event, and we are happy to present them with the two highest awards in amateur flat track racing.”

The Nicky Hayden AMA Flat Track Horizon Award honors the amateur racer who is poised for success at the professional level. The award is named after AMA Motorcycle Hall of Famer Nicky Hayden, who won the first AMA Horizon Award in 1997. Hayden died in 2017 after being hit by a car while training on a road bicycle.

“My goals coming into this event were to stay consistent and keep my head on straight,” Brunner said. “Nicky Hayden was an inspiration to us all with his character, on and off the bike. It’s great to win this award and join the ranks of the riders I have looked up to.”

“He told me before we got here that he wanted to win four AMA No. 1 plates and the Horizon Award, and he went out and did it,” Hensler said. “Trevor wasn’t happy with how he did at this event in 2018 and made changes to his training and nutrition that really helped him this year.”

Reese, 11, is a third-generation flat track racer who excelled in the classroom during the past year. While he performed well at nearly every subject in school, he said his favorite class is gym class. He was excited to get home and tell his friends about his award.

“He gets his homework done before he gets on his bike,” Reese’s father, Darryl Reese, said. “I’m so proud of how well he’s done. His teachers have been great about giving him work to do when we travel to go racing, and he gets it all done.”

All the award winners will be honored during the AMA’s Legends & Champions Weekend in Columbus, OH, Dec. 6-7.